This article covers the architectural element. For the Bundeswehr project, see DOOR . For the film Die Tür see Die Tür .

The following important information is missing from this article or section:
In the case of door leaves and door frames, historically and globally there is an extreme variety of shapes. Unfortunately, the article gives almost no information about the anatomy, design, framing and congruence to the architectural style of the house.
Help Wikipedia by researching and pasting it . 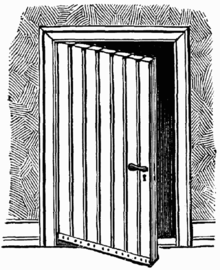 simple door made of wooden slats

Stone door in a megalithic dolmen with lateral tenons

Simple door of the Dogon in Mali with lock for access to a storage tank; the ornaments originally had a disastrous ( apotropaic ) function

Wall cutout for a door in the shell 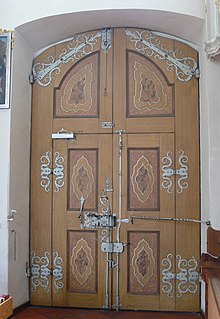 Door of the parish church St. Gallus and Ulrich in Kißlegg with insert door , numerous functional fittings and frames (painting)

A door , especially above and medium German and door, is a movable device for closing an opening (of a wall , the wall , of a passageway or step) which allows the passage or trapdoor after opening. A distinction is made between external and internal doors. A door usually has an upright format. Wings that are used for the passage of vehicles are also known as gates . A wing that is installed horizontally or at an angle is often called a flap .

Wings that are not suitable for passage or climbing through are referred to as loading or flap , unless they are used for exposure. Otherwise they are called windows .

The word door, Old High German turi, Middle High German door (e), has been used since the 8th century. Originally it only appeared in the dual , later in the plural and would be reinterpreted in a new singular in German. It goes like Old Icelandic Dyrr (plural) and Old English duru (plural) to proto-Germanic flat major back, which in turn in Ablaut to indogermanisch d h advertising stands (see. Greek Thyra, Latin fores ).

The first man-made dwellings made of knots, wooden posts, clay, or stone usually had no lockable entrance doors; To protect against the entry of domestic animals or predators, the presence of a relocatable wickerwork of twigs in the lower half is likely. Door locks appear later - as do the window openings. There were also no interior doors. Antique and medieval doors usually had lateral tenons that were anchored in matching cavities in the threshold and in the lintel.

During the rescue excavations in 2010 at the Zurich Opera House , the most important individual find was a wooden door around 5000 years old, which could go down in history as the third oldest door in Switzerland and probably Europe. The Zurich door resembles the second oldest specimen found in Pfäffikon ZH . It is much better preserved and consists of three boards that are held together by sophisticated connectors. The hinge has also been preserved.

A door allows the delimitation of indoor and outdoor spaces from other rooms or other outdoor areas with the possibility of passage. Doors can be locked with a lock and the premises can be made inaccessible. In addition to the optical design, heat and sound insulation as well as the fulfillment of other structural regulations or requirements such as smoke protection , radiation protection (X-ray rooms) or fire protection and mechanical safety are decisive for the design and construction of doors. These additional functions can be achieved through inserts in the door leaf , additional seals between the door leaf and door frame or through the sequence of several doors. The window is related to the door, but is not accessible. The French door is a mixed form.

Special designs are of cultural and historical importance, for example bronze doors or coffered doors . 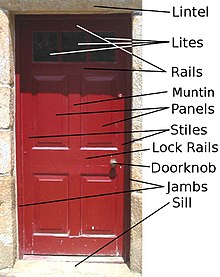 A modern cassette door in the United States .

There are also numerous variants of doors according to their type of movement .

In the construction industry, doors, like windows, are fundamentally differentiated in addition to their type of construction, according to their opening direction (also stop (s) or impact (s) direction ).

Fittings are all functional or decorative parts attached to the door:

The axis of rotation (pin or bolt) attached to the frame or stick, on which the door leaf is suspended (hence the name). Usually two, in the case of heavy doors or those with increased security requirements, three or more are used. Hinges were originally made of wood or stone, later in forged metal, which was embedded in the supporting material or smashed. Today the door hinges are usually drilled or let into the frame or stick and screwed.

Originally an iron band with one end bent into one eye , which encompasses the thorn of the hinge and which was firmly fixed to the door leaf at the other, long end. This construction is obsolete due to the drill-in hinges commonly used today and is only occasionally used for decorative purposes. Colloquially, the unity of band and angel is collectively referred to as band . Modern door hinges for doors with increased requirements can usually be adjusted retrospectively in terms of height and inclination. In addition to the common drill-in hinge, there are a large number of other visible or invisible hinges, for example the Fitschenband . When the door is closed and open, the upper hinge is continuously subjected to tension due to the weight of the door, the lower hinge is subjected to pressure. When the door is closed, the forces act parallel to the wall surface, when it is open, perpendicular to it.

With the door lock a mechanical device as a whole is meant, with which a door can be firmly closed, it consists of the following elements:

It locks the door (automatically) into place when it is closed. The case may be, in certain locks by a secured case determination by handle and key movement prevented from extending.

The door handle is used to move the door leaf, especially for pulling or (with sliding doors) pushing it is required. It can protrude or be designed as a recessed grip, the latter being the usual design for sliding doors. If the lock latch can be operated with it at the same time, it is called a door handle or door handle . By operating the door handle, the latch is withdrawn to open the door. Most of the hinged doors have a door handle on both sides of the door leaf, while the end doors only have an immovable doorknob or bar handle on one side . In this case, the latch cannot be unlocked from this side, so that the door can only be opened with a key.

With the door handle, the latch of the door lock can be released from the strike plate and the door can be opened.

With this the door is also locked with a key . The movement of the bolt is derived from the rotation of the key.

The lock cylinder describes a mechanical component inserted into the lock , which is set in motion by a key or, in modern times, electronically by a coded key or a chip, and which opens or closes the bolt. See also access control systems with code number entry or biometric registration.

Other components of a door lock can be cover elements such as handle plate (or door rosette ) and key plate , possibly made in one piece. Together with a handle, these are referred to as a set .

Other parts and additions

Other functional or decorative parts that do not count as fittings in the true sense:

Doors according to their function

The following properties or functions regulated in standards can usually also be combined with one another.

Doors according to their type of movement

Carousel door in the historic Kaiserbad in Karlsbad (Karlovy Vary) 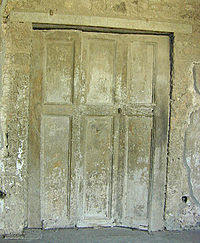 Doors according to material and structure

It will cover between glass door , plastic door , stone door , wooden door and metal door distinction, the latter may also act as screen door be executed.

Wooden doors are differentiated depending on the structure of the door leaf:

The specified tolerance dimensions result in an air gap between the leaf and frame of at least 5 mm and at most 9 mm for the air gap of the left and right vertical folds, with the individual gap not falling below 2.5 mm and not exceeding 6.5 mm may.

DIN 18101 is a manufacturing standard that ensures that doors and frames from different manufacturers fit together. The 1985 edition made a distinction between rebated and unrebated as well as single-leaf and double-leaf doors; For the common single-leaf rebated door leaves, a uniform height of 1985 mm (nominal size 2010 mm) was defined, for which five widths of 610 mm, 735 mm, 860 mm, 985 mm, 1110 mm were specified, as well as an enlarged door leaf of 1110 mm × 2110 mm. Instead of these five door dimensions, a grid size was specified in the 2014 edition in which the height and width are independent, and are each in steps of 125 mm - the previous widths of the door leaf have been expanded to the grid range 485 mm to 1360 mm, the heights are now in the grid range 1610 mm to 2735 mm. The most common dimension for interior doors is 860 mm × 1985 mm.

The shell dimensions of the wall openings to be provided are regulated in DIN 18202 - tolerances in building construction. See also the standards DIN 4172 and DIN 18100, which deal with the standard dimensions traditionally used in masonry construction.