The title of this article is ambiguous. Further meanings are listed under bell (disambiguation) . 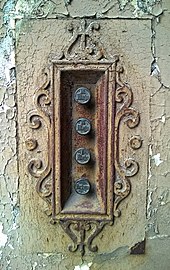 A bell is an acoustic signaling device , consisting of an oscillating body (e.g. bell ) and a hammer to stimulate the oscillation . The task of a bell is to attract the attention of the addressee through the ring tone, so the bell is often part of an intercom system . Although, in contrast to bells, ringing is not stimulated by single strikes but several times to a continuous tone, it is still sometimes referred to as a bell. Electronic bells, such as melody bells, are also referred to as bells.

The derived term ringing is also used for acoustic signals that are no longer generated by actual ringing, in particular telephones ( ring tones ), electronic alarm clocks and electronic doorbells. For people with hearing impairments , the bell can also be combined with a light signal, and models with a vibrating alarm that can be carried in the pocket are also available for radio-controlled bells .

Electromechanical bells with a continuous drive work with a Wagner hammer or with a swing armature . The Wagner hammer is suitable for direct and alternating current, but causes radio interference and excess voltage due to the switching processes during operation , while the oscillating armature version only works with alternating current, but is completely free of radio interference . For safety reasons, bells in the home are usually operated with harmless low voltage , which is generated by a bell transformer . An alternative is the use of batteries , which only emit direct current and are therefore not suitable for ringing bells with a vibrating armature.

For versions without continuous drive (gongs) see below .

Circuit diagram of a bell system

Enlarge the third image (by clicking) to see the lines described here!

The parts of the doorbell are:

Door gong with the parts marked in the picture: electromagnet, clay sticks, anchor with clapper

In the de-energized state, the clapper rests some distance from the lower left clay stick. (Note the accompanying photo.) The anchor is held in this position by a spring. If the bell button is pressed, current flows through the electromagnet, which quickly pulls the armature with the clapper upwards. The anchor snaps past the magnetically targeted end position and strikes briefly with the upper clapper on the upper right clay rod, but then falls back a few millimeters. If the current flow is interrupted again (button released), the armature falls down, is braked by the spring, but jumps beyond the rest position (just above the lower left clay stick) and lets the lower clapper strike against the clay stick; then the armature is lifted back into its rest position by the spring. As a rule, the tone sticks are designed in such a way that they vibrate at different pitches, so that a characteristic tone sequence is created.

With the advent of electronics, there were expanded ways of creating ringtones . Electronic ring tones have been used in cell phones from the start. These are also popular with alarm clocks. Ring tones could be programmed. Common 3-tone ICs for doorbells are z. B. SAB 600 and SAE 800 . Modern circuits made it possible to replace the signals previously used for ring tones with recordings of melodies .

In order to keep the lesson times in schools, automatic school bells were installed in many schools. A central device sends a signal to sound devices that are distributed throughout the school building. Today public address systems have replaced electromagnetic bells. Mostly they are also used for announcements and have an integrated alarm function.