The Wagner hammer , also known as the rheotome or Neeff hammer , is an electromechanical interrupter that, in contrast to the lightning wheel, is magnetically driven and works automatically. The name results from its inventor Johann Philipp Wagner , who came up with it in 1836, and the form of contact he chose. In terms of functionality, Wagner's hammer has mostly been replaced today by electronic circuits such as the multivibrator . 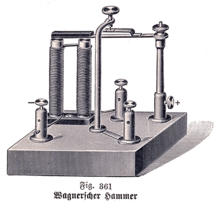 Play media file
Wagner's hammer is working on a bell

The working frequency or oscillation period is determined by the mechanical natural frequency of the spring-mass system armature-return spring if dimensioned appropriately . By increasing the mass of the system, e.g. B. a heavy clapper, a low frequency can be caused.

Functional principle with a bell (animation)

Based on the principle of Wagner's hammer z. B. the operation of electromechanical bells that require an oscillating movement.

In the past it was also used, for example, for:

In today's applications, the Wagner hammer is mostly replaced by electronic circuits.

Malfunctions and wear and tear

A Wagner hammer generates faults as a result of the switching arc and is subject to contact wear and contact erosion. To reduce these effects, a capacitor is often connected in parallel to the contact, which briefly takes over the current flow at the moment of interruption until the contacts are sufficiently far apart. This capacitor also increases efficiency because it avoids energy loss in the switching sparks. Another method of reducing radio interference and reducing contact erosion is to connect a protective diode in reverse direction parallel to the magnet coils, which is only possible with DC voltage operation. 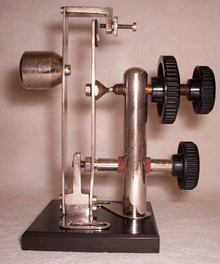 A Vril interrupter made of a spark inductor with a throw of 10 cm, which is a further development of the Wagner hammer and is used for frequencies> 60 Hz

Electromechanical bells, choppers or spark inductors work particularly effectively and reproducibly if the working frequency matches the mechanical natural resonance. The Wagner hammer can also be operated with AC voltage. Then there is a beating with the frequency of the operating voltage - unless it has half the operating frequency.

Similar arrangements without an interrupter contact, in which the electromagnet is operated with alternating current (mains frequency) (doorbell, rattle), is not a Wagnerian hammer. Here, the natural resonance of the armature is expediently twice the operating AC voltage. Door chimes only strike when switched on or off - they have a comparatively heavy armature that cannot follow the alternating voltage. Older telephone bells also work directly on the particularly low-frequency ringing voltage (25 Hz) without an interrupter contact. None of these arrangements cause any radio interference and are comparatively reliable and wear-free.

A distantly related version, in which the switching contact is switched as a normally open contact and not as a normally closed contact, is the self-holding function.