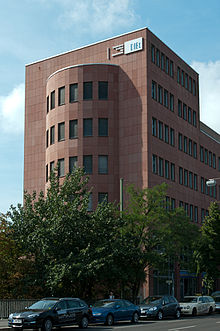 The German Institute for Construction Technology (DIBt) is a technical authority in the construction sector. The institute carries out its activities on the basis of an agreement concluded between the federal and state governments. Its most important task is the approval of non-regulated building products and types. The institute is based in Berlin.

The focus of the DIBt's work is on safeguarding public interests, in particular with regard to stability, fire protection, health and environmental protection, noise and heat protection, energy saving, sustainability, safety in use and water protection.

Building supervision and building regulations came under the jurisdiction of the federal states after the Second World War. With the approval of building products, they were confronted with two problems: On the one hand, the technical complexity of the approval process increased sharply with the numerous new products and processes of the economic boom. On the other hand, the building materials industry demanded approvals with nationwide validity. In response to this, the "Institute for Building Technology" was founded in 1968 on the basis of a federal-state agreement. The institute took over (nationwide) the licensing and other structural tasks.

After reunification, the new federal states also joined the founding agreement in 1993. The institute was renamed "Deutsches Institut für Bautechnik". Under the abbreviation "DIBt", the institute is known today in specialist circles far beyond the national borders.

Since it was founded, the institute has taken on numerous additional tasks: From 1993 the DIBt has been part of the European Organization for Technical Approvals (EOTA). The building regulations lists have been published on behalf of the federal states since 1994. In 1998 the DIBt granted the first European technical approval in Europe. In 2007, the DIBt was recognized by the states of Brandenburg and Berlin as a building technology testing office. In 2008 it took over the coordination of the market surveillance of CE-marked products and has been the "joint market surveillance authority of the federal states" since 2014. In 2012, the DIBt was named as the only technical assessment body in Germany and as the notifying authority according to the new EU Construction Products Regulation. With the announcement of the amended Energy Saving Ordinance in November 2013, the institute also became the registration center for energy certificates and inspection reports for air conditioning systems and a control center for tests that can be carried out electronically.

The DIBt is a legal institution under public law . It has been headed by Gerhard Breitschaft since 2009, who is supported in this task by the Board of Directors, which decides on fundamental matters.

The technical and legal supervision of the institute is carried out by the Senate Department for Urban Development and Housing of the State of Berlin , which is responsible for the building industry .

The DIBt has five departments:

The departments I to III together represent all technical requirements for buildings. About 150 engineers and scientists are employed here. The departments for national as well as European and international law are located in the presidential department. In addition, there is coordination with the technical assessment bodies in other European countries and the recognition and notification of third parties. The area of ​​market surveillance is also assigned to the presidential department. The 'Central Affairs' department takes on internal administrative tasks and is responsible for communication with DIBt's European and international partners.

The DIBt is supported in its technical work by approx. 600 honorary experts from science, business and administration. These are organized in product- and topic-specific expert committees as well as in interdisciplinary committees for questions of principle.

The institute's activities as a registration office for energy certificates and for inspection reports for air conditioning systems as well as a control office for electronic spot checks are primarily based on the amended Energy Saving Ordinance (EnEV 2013).

The recognition of PÜZ bodies is based on the state regulations on recognition as a testing, monitoring and certification body in accordance with building regulations.

The structure and procedures of market surveillance are regulated across all areas in Regulation (EC) No. 765/2008.

The exchange with the professional world is an important part of the technical work of the DIBt.

The DIBt is also a member of the World Association of Organizations for Technical Assessments (WFTAO).