The title of this article is ambiguous. Further meanings are listed under Wall (disambiguation) . 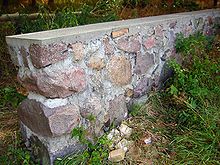 A simple wall made of natural stone 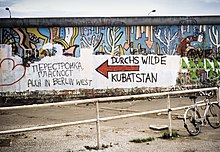 A wall (from Old High German mûra , borrowed from synonymous Latin murus ) is a solid wall made of masonry . Traditionally, walls are built by masons .

The lower boundary of a wall is called the bottom , the upper crown , often covered with a wall covering.

Colloquially, the term is usually used to describe a free-standing, flat building . In its usual meaning of a wall made of stone and mortar , the word was borrowed from the time when Germanic tribes learned the Roman stone building technique and is therefore - like many other building terms - of Latin origin. Their counterpart among the Germans was the plaited and mud-smeared wall. The gender was then transferred from the word wall to wall.

Colloquially, the terms wall and wall are often used synonymously. However, technically this is wrong. Today, walls are often made of reinforced concrete with a similar function , as non-load-bearing interior walls also in dry construction . They are made not by joining stones but by pouring concrete into a formwork . Border walls or walls and fortifications for city and national defense or to prevent escape are colloquially referred to as walls, even if they are not bricked (examples: city ​​walls , Berlin Wall ).

Masonry is a ( structural material ) that is made from bricks and mortar. Stacked walls without the use of mortar are a special type of construction and are called dry stone walls . The minimum requirements for the mechanical properties, the quality and the quality control of the building materials stone and mortar are regulated in numerous building material standards in Europe. Wall stones are differentiated between artificially produced stones and natural stones . Artificially produced bricks are classified according to their raw materials. In modern construction, natural stones are mostly used in the repair of natural stone masonry and only rarely in new buildings. All types of rock occurring in nature are used that have sufficient minimum compressive strength and that do not show any structural or weathering damage. Walls can consist of regular or irregular layers of stones, but they can also be piled up wildly so that there are no continuous layers. While natural stones are only regulated in the masonry design standards of DIN EN 1996 Eurocode 6: Dimensioning and construction of masonry structures , the requirements for artificially produced masonry stones are described in various building material standards. Ceramic clinker, for example, is standardized as part of masonry bricks in DIN 105-4.