West Wall is a redirect to this article. See also: Little Western Wall .

The Western Wall ( Hebrew הכותל המערבי ha-kotel ha-ma'arawi , literally "the western wall", colloquially just called Kotel (כותל) "wall") in the old city of Jerusalem is a religious site of Judaism . Many of the mighty stone blocks from which the wall is built are made from Jerusalem's Meleke limestone, which was once mined on the northern outskirts.

The Western Wall is part of the western enclosure wall of the Herodian Temple plateau . About a third of the wall has been removed and about a third is below the surface of the earth. Herod was not able to complete the expansion of the temple area he had begun during his lifetime, rather the work was only finished shortly before the outbreak of the Jewish War . This is also confirmed by coin finds that were made under the southern part of the wall. The Wailing Wall was completed under Herod Agrippa II , which corresponds to the depiction in Flavius ​​Josephus . Seven layers of stone from this wall are visible today, with younger masonry above it.

As long as the temple existed, the western wall had no special religious significance, nor was it initially the place to which Jewish pilgrims came after the destruction of the shrine. Rather, they worshiped a "pierced stone" ( lapis pertusus ) in late antiquity , which can be the rock in the center of the Dome of the Rock, but also a striking ruin of the Herodian Temple, which is no longer preserved.

The following texts from rabbinical literature show how the Western Wall became the center of worship:

In the early Islamic period, a Jewish quarter was built around the western wall. Texts from the Cairo Geniza attest to a “cave synagogue” on the western wall for the 11th century. Your identification is uncertain.

Only in Ottoman times was the Jewish community officially granted a place of prayer at the Western Wall by the Muslim authorities; under Suleyman I , a piece of the wall was exposed and cleaned for this purpose.

During the English mandate, as in the rest of the country, there were repeated attacks on Jews by Arab residents of Jerusalem; the place of prayer - a dead end street about 3 meters wide and 30 meters long in the Maghreb district - was desecrated several times.

From the Israeli War of Independence ( Palestine War ) in 1948 to the Israeli occupation of the Old City of Jerusalem in 1967 in the course of the Six Day War , the area was controlled by Jordan, the Jews were denied access to the Kotel contrary to the ceasefire agreement. After the war, the part of the Western Wall that is visible today (57 meters) and a large square in front of it were exposed. For this purpose, the Maghrebian quarter of the old city of Jerusalem was demolished. As an aerial photo from 1931 discovered in the Zeppelin Museum in Friedrichshafen in 2009 shows, the aboveground part of a mosque was destroyed, which can possibly be traced back to the 12th century. 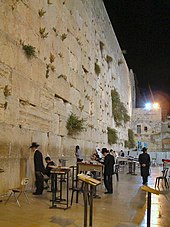 Prayers at the Western Wall

The square in front of the Western Wall is open around the clock every day. Access is free and possible via three entrances:

In order to get to the square, security checks have to be carried out with metal detectors . Men should wear a headgear immediately next to the wall when entering the separated area, but not necessarily a kippah . Appropriate clothing is expected from all visitors. Kippot made of white fabric will be distributed free of charge on the ramp in front of the access for the male area. They are made by the state-owned Western Wall Heritage Foundation .

The prayer areas are separated by gender: men on the left and women on the right. In the summer of 2013, a platform for common prayer was set up to the right of the Moroccan Bridge . Non-Muslims use this bridge to enter the Temple Mount through the Moroccan Gate at the permitted times . Liberal and conservative Jews demand a common access for men and women and behind that a mixed area - and for Orthodox Jews separate areas. After the dispute has ended, the construction work will take place in 2018.

The Western Wall is one of the most visited places in Jerusalem today. The square serves as a venue for religious or military ceremonies. 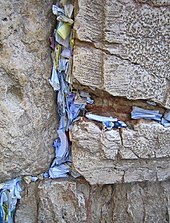 Prayer note in the Western Wall

The Western Wall is called the Western Wall , or simply Kotel , by Jews because it was the western wall of the temple complex and is not primarily a place of lament . It is 48 meters long and 18 meters high. Many people visit the Western Wall every day to pray. Many also put written prayers , wishes and thanksgiving in the cracks and crevices of the wall. For many Jews it is a symbol of the eternal, existing covenant of God with his people. This tradition of prayer notes goes back to the early 18th century.

Since the space in the cracks is limited, many pieces of paper fall down over time. You will be picked up. Before Passover in spring and before Rosh Hashanah in autumn, the pieces of paper are removed from the cracks and buried together with the unread ones in the Jewish cemetery on the Mount of Olives.

Access is easily possible for non-Jews. Photographing within the defined area immediately in front of the wall is generally permitted , except on high Jewish holidays and the Sabbath . The local information must be observed (see Mechiza ).

Panorama of the Western Wall