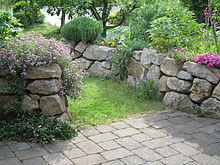 Construction of a dry stone wall with recess (back walling).

Dry stone masonry (also called Klaubstein masonry ) describes masonry made of broken or natural stone that was erected without the aid of mortar .

Today, dry stone masonry is mainly used in horticulture , but has had various areas of application in the history of building, for example in house and object construction , well construction , in historical hydraulic engineering, in the construction of field and defensive walls and in agricultural terrace construction (such as steep vineyards ). Houses made entirely of dry masonry are described in the article cantilever vaults made of dry masonry .

On November 28, 2019, dry stone construction was added to the UNESCO list of the intangible cultural heritage of mankind. This includes dry stone walls in Croatia, Cyprus, Greece, Italy, Slovenia, Spain and Switzerland.

Today's stone basket walls ("gabions") are not part of the masonry .

Stacking loose stones without mortar is the oldest form of stone construction. The Bronze Age Cyclops masonry in the Mediterranean region has a special quality . The two main types of dry stone walls are freestanding walls, e.g. B. as pasture boundaries, and retaining walls , e.g. B. for the formation of agricultural terraces on steep slopes. A third type, the lining wall , looks like a retaining wall, but actually serves as a cladding or erosion protection of stable terrain.

Construction work on dry stone. Illustration of the Valencian Museum of Ethnology

Importance for rice, olive and viticulture

Dry stone wall of a vineyard with typical vegetation

Round arch in dry masonry

In rice fields , olive groves and vineyards , dry stone walls are built on steeper slopes in order to enlarge the areas that can be used for cultivation by building terraces . The course of the air temperature during the day is balanced by dry stone walls and steep- slope viticulture is also made possible on exposed slope sections: In the evening and into the night, the dry stone wall radiates the warmth stored during the day from solar radiation in the long-wave area back to the air layer close to the ground, thus reducing the level of air Nightly cooling of the vineyards.

Due to their water permeability, dry stone walls in terraced olive groves and vineyards have proven to be more stable than masonry grouted with mortar . A technically well-built dry stone wall can 100 years and outlast more. By reducing the slope also is olive harvest with ground networks and the traditional vintage made much easier by hand.

Traditionally, only natural stones that occur locally are used for dry stone walls; reading stones from the surrounding area are often used, but also quarry material . Bricks that are as rectangular as possible are used for more demanding structures. As a rule, a back wall, in some areas also called backlash , made of smaller, irregular stones or quarry shards is built behind the wall. This serves as a filter and frost protection layer.

A certain manual skill is required to create a dry stone wall. Depending on the size and thickness of the dry stone wall as well as the nature of the soil, it is necessary to put a baggage of gravel or rubble under the foundation stones . For structural reasons, cross and "zip" joints should be avoided. A third of the stones used should usually be built in as binder stones that point backwards into the ground or into the back wall. The wall base should also be a third - the height of the wall. This is a rule of thumb for favorable conditions, that is, with stable floors and good bricks. Under average conditions, the wall base is half the height of the wall. Large or extensive dry stone walls - especially retaining walls - can also be dimensioned in terms of engineering so that no more stone than necessary is built in.

Dry masonry at a structure of the Upper Harz water shelf

To protect against erosion, dry stone masonry was used in historical hydraulic engineering as a wave protection wall or to surround canals and ditches.

Dry masonry techniques also played a role in early medieval castle construction, although the examples that have survived mostly operate with mortar. 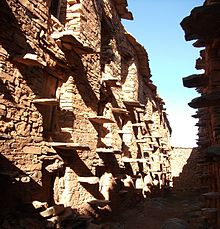 In the architecture of the Berber peoples of North Africa, structures made of dry stone play a major role. First of all, the agadirs in the area of ​​the Anti-Atlas in Morocco should be mentioned, whose field stone walls were held together and sealed with very little earth or clay. The watchtowers ( atalayas ) built by Berbers during the Islamic occupation of the Iberian Peninsula are also of importance. The construction techniques were probably developed during the terracing of mountain slopes, but due to the lack of rain they were left to decay a long time ago, so that they hardly appear today. Many houses in parts of the Anti-Atlas and the High Atlas were built using the same technique - but most have already been replaced by new buildings made of hollow blocks and with foundations and ceilings made of concrete .

The only surviving example of the knowledge and application of dry stone masonry techniques in sub-Saharan Africa are the ruins of Greater Zimbabwe , which are dated to around AD 1100 using the radiocarbon method. 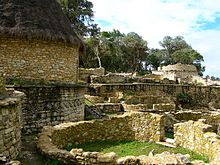 The Inca buildings in Peru ( Cusco , Machu Picchu ), built in the 14th and 15th centuries from large stone blocks, are also dry stone walls, but their manufacturing technology differs fundamentally from the European or North African examples. Similarities in construction techniques can only be found in less significant buildings.

In the highlands of the Andes , other cultures also occasionally worked with simple dry stone masonry techniques - here the buildings of the Chachapoya Indians from around 1000 to 1300 should be mentioned, in which, however, clay mortar was also used.

The Nan Madol complex on the Carolines Archipelago, unique of its kind , was built around 1300 AD from stacked and interlocked basalt columns .

Corner stones at Himeji Castle ; small stones used for relining and stabilization of the larger square.

Solid dry stone walls, actual stone wall bases that were erected in front of an earth wall, are typical of Japanese castle construction . Official stone inspectors were used to procure the stones that were needed in enormous quantities. The walls are two-layered, with rubble stones and boulders on the outside and smaller stones on the inside. They are concave in ascending order. The higher the walls became, the more stones were needed on the base to counteract the earth and water pressure. The walls were built as smoothly and seamlessly as possible to make climbing difficult. Engelbert Kaempfer points out in his description of the pedestal walls of Edo Castle that the stones are only laid one on top of the other and “are not connected to any lime or any other bracket, because one thinks that in an earthquake they tend to give way to movement and vibration in this way so the whole building could get undamaged ”. The centuries that followed proved that.

Dry stone walls are important biotopes for numerous plants and animals. In the joints you will find special plant communities that have adapted to extreme site conditions. They also offer a valuable habitat for various heat-loving animal species, such as lizards , common toads , wild bees and ground beetles .

Dry stone walls in agricultural terrace crops support soil protection by reducing soil erosion through the erosion effect of the water. The precipitation slowly seeps into the ground behind the dry stone wall, so that the roots of the plants can gradually absorb the soil water and the surface runoff is reduced. Since the masonry of the dry stone wall is not jointed, the water can escape between the reading stones if the rainfall continues , which leads to saturation of the floor space without exerting pressure on the masonry.

An indirect ecological benefit is that dry stone walls can, in principle, be built without external materials such as cement, sand and metal or external energy. Only with high walls z. B. from 5 m, this advantage disappears if other techniques require much less material or labor.

Many dry stone walls in bushy and fallow vineyards are now falling into disrepair. Since dry stone walls are not compatible with the increasing mechanization in viticulture, they can only be found in historically grown and unadjusted vineyards . However, the state grants financial grants to the winegrowers for the maintenance and reconstruction of dry stone walls .

According to the “ Red List of Biotope Types ” in Baden-Württemberg , dry stone walls are “endangered biotopes ” according to hazard category 3 and are rated as a type of biotope “of low to high importance” in terms of nature conservation .

According to the annex to the State Nature Conservation Act of Baden-Württemberg 6.3, for example, dry stone walls (such as stone bars over 5 m in length) over 0.5 m high or with an area of ​​over 2 m² are "specially protected biotopes" according to Section 32 (1) No. 6 NatSchG.