The following important information is missing from this article or section:
DEULA is not mentioned
Help Wikipedia by researching and pasting it .

In Switzerland the degree is called dipl. Agricultural Technician HF .

The following education providers exist in Switzerland (as of 2012):

The schools are higher technical schools for agriculture and forestry.

The interests of farmers in matters of agricultural engineering are represented by the Swiss Association for Agricultural Engineering (SVLT-ASETA), founded in 1924 . 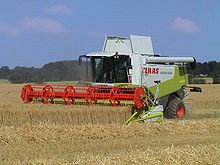 Agricultural machines are specialized machines that are mainly used in agriculture . They are usually characterized by their mobility. That means they are either self-propelled or pulled by a tractor.

In the meantime, modern technology and information processing have also found their way into agricultural machinery. Modern tractors, fertilizer, seed and harvesting machines already have satellite-controlled navigation and mapping systems ( precision farming ) and a high degree of automation for the purpose of targeted application of the quantities . In the course of structural change, the areas to be cultivated per farm will be larger and the machines used will be correspondingly more efficient.

The associated investments are often no longer worthwhile for small and medium-sized farms. They therefore often join forces in machine rings or hire contractors for special tasks.

Independent tests on agricultural machinery are carried out by the German Agricultural Society (DLG) , among others , which has its own test center for this purpose.

The most important international exhibition of agricultural engineering is the Agritechnica trade fair , which is organized by the DLG every two years at the Hanover trade fair . Agricultural machinery now includes a whole range of sensor applications that record physical and chemical soil parameters, among other things.

The Agricultural Engineering Association in the Association of German Mechanical and Plant Engineering e. V. estimates the global production volume for agricultural machinery and tractors at 100 billion euros (2014). The European Union has a share of 28 percent, followed by North America (NAFTA) with 22 percent and China with 18 percent. In line with the growing importance of the Chinese sales market, production here has increased significantly over the past few years. This happened both on the part of the originally Chinese companies (the largest here are the Shifeng Group and the state-owned YTO Group) and the companies from Europe, America and other parts of Asia that have built factories in China.

The second half of global agricultural engineering sales are generated by other large companies with sales of over one billion euros (e.g. Iseki, Mahindra & Mahindra, Same Deutz-Fahr, YTO) and a large number of medium-sized manufacturers. There is a particularly high density of small and medium-sized agricultural engineering companies in Germany, Italy, the USA, Turkey, India and China. The VDMA divides the machines into the following categories: tractors, devices for tillage, devices for sowing, fertilization and plant care, harvesting technology, transport technology and logistics, forestry technology, machines and systems for indoor work (e.g. milking technology), irrigation systems, Equipment for garden and landscape maintenance. Some machines are offered as so-called self-propelled machines, ie with their own engine and driver's seat (including combine harvesters, forage harvesters, potato and beet harvesters, mixer feeders, crop protection devices, wood harvesters). Tractors represent around a third of total sales. Some of them are also used for non-agricultural purposes. In second place in terms of sales are harvesters.

The technological development trends for agricultural machinery relate, among other things, to automation, networking and data management, electrification and a further increase in the size of machines in order to increase efficiency in the field and to counter the increasing labor shortage. Modern management standards are subsumed under the term precision farming or smart farming.

The sales markets for agricultural technology are distributed in the individual countries and regions according to the importance and degree of mechanization of agriculture. The European Union (EU) had a share of 26 percent in 2014, followed by North America (NAFTA) with 23 percent and China (16 percent). India, Brazil, Turkey and Japan also play a major role. Within the EU, France and Germany are the largest sales markets for agricultural technology with a volume of around five billion euros most recently (2014).

The VDMA estimates sales of new tractors for 2014 at 2.05 billion euros worldwide. In terms of number of units, India is the largest tractor market, but with a predominantly low engine output between 25 and 35 kW. For comparison: in Germany, the average engine power in 2014 was over 90 kW. The second largest sales market for tractors is China, followed by the USA and the European Union.

In the Commonwealth of Independent States (CIS), which among other things plays a major role in the production of grain, agricultural investment in new technology has decreased significantly since 2008. The political framework, e.g. B. Trade barriers for foreign products contributed to this.

After reaching a new record level in 2013 with a global sales volume of 104 billion euros, the industry is in an economic downturn in 2014/2015. The so-called megatrends urbanization, changes in consumer habits, population growth and the trend towards decreasing agricultural land are seen as influencing the demand for modern agricultural technology as favorable medium and long-term factors (source: VDMA 2015).