Pair of door handles with attached rosettes , a square pin in between

Two wooden display models with index finger hollows and thumb rests;
at the bottom as a "frame door handle" with an offset handle to prevent fingers from being trapped when the door is closed.

Construction principle of a framed door handle. The actual doorknob handle is offset by 25 mm. The bend at the end of the handle should help prevent clothes from getting caught. 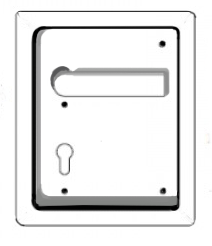 The door handle of the gym shell lever is sunk 25 mm into the door.

Door knob and door handle, designed by Ferdinand Kramer , 1925, with rose and keyhole cover for the door handle

A door handle (also door handle , door handle , Switzerland. Door case , Austrian. Door handle is) an angled lever for opening and closing a door by hand. The latch lever consists of the actual handle and the right-angled mandrel . Usually the handle rotating around the spike is pushed down to open the door. The mechanism of the door lock ( top - and mortise causing the) lock latch (and in special cases also the lock bolt ) by the rotational movement of the mandrel is pulled out of the striker plate. The latch does not have to be pressed to close the door, as the latch snaps into place automatically.

The connection between the most on both sides of the door panel mounted door handles via a square pin, also known as pusher mandrel or mandrel pin is referred to. The mandrel also establishes the connection with the mechanism of the lock: its square is guided through the inner square of the handle follower of the lock so that it rotates together with it.

Occasionally the handle is an integral part of one of the two door handles. This used to be the rule with hand-forged handles.

An ergonomic door handle can have special design features, such as a thumb brake , a thumb rest , an index finger groove or a palm rest . In addition, it can be designed with a pronounced gripping volume . Most door handles, however, are designed from a purely aesthetic point of view and are still sufficiently functional in everyday use, because "there is no doubt that reaching for the door handle does not require a skilled hand."

The ends of the handles are often bent towards the door leaf in accordance with European standard EN 179 in order to make it more difficult for clothing to get caught on the door handle.

So-called framed door handles are used on doors with a narrow metal frame, which for example have a glass panel. The door handle to be fastened in the frame of this door leaf is located close to the edge, which means that there is a risk of fingers being trapped between the door handle and the fixed door frame when the door is closed . In order to enable safe operation of the door, the handle in accordance with the guidelines of the Federal Association of Accident Insurance Funds (BUK) in schools and kindergartens is offset by an extension of 25 mm towards the middle of the door leaf ( Statutory Accident Insurance GUV-SR 2001 - 4.2.5.3; GUV 2001 - 2.6.4).

A door handle sunk into the door leaf is referred to as a gym shell. Installing the door handle in a (often shell-like) recess prevents it from getting caught on the handle during sporting activities (DIN EN 179).

Most doors in Europe have a door handle on at least one side. In order to prevent an unlocked door from being opened by unauthorized persons, house doors and apartment entrance doors are often equipped with a fixed door knob on the outside .

In many countries outside Europe, as well as in the UK and France, are mainly held latches doorknobs (ger .: doorknobs ) are used. If the door lock does not have a latch, the door is often held in the closed position by a snap-in, spring-loaded pressure roller. For door locks with a latch, the knob is turned to open the door. The disadvantage here is that it is difficult to open by people with restricted mobility or when no hand is free to open the door. It can be an advantage that even small children and pets such as cats and dogs are usually not able to open the door. With lockable doors, the door lock is usually located in the middle of the door knob. On house doors, the knob is usually fixed on the outside and the door can only be opened from the outside with the key (see interchangeable lock ).

A pair of door handles is usually completed by the associated plate or associated rosettes to form a door fitting .

Rosettes are called smaller, usually round or oval covers, which only cover the recess for the door handle or for the keyhole.

Types of installation of a pair of door handles

The two lever handles are connected to each other and indirectly to the door by means of the square pin inserted through the door and the mortise lock or the attached box lock (edge ​​dimension: 8 mm for room doors, 9 mm for fire doors and 10 mm for house doors). The square pin, which is often fixed to one of the two door handles (alternatively with a fastening as on the opposite side), is pushed through and the other handle is pushed on from the opposite side. Before doing this, the rosettes are pushed open on both sides. The fastening between the mandrel side of the latch and the square pin is carried out by means of a "grub screw" ( stud screw) running across the mandrel side . In older doors, they were fastened using a thin pin inserted into a hole or into the longitudinal slot in the square. In order to exclude shifts due to later loosening of the screw, it is pointed, whereby it digs a little into the square pin and creates a form fit . In general, adaptation to doors of different thicknesses is necessary, but a better form fit is only possible with increased design effort. In the case of "prefabricated doors" with the door handles supplied, however, the procedure is the same as before by making a hole for a pin in the square.

The door handle designed by Walter Gropius (1883–1969) is a classic . According to his information, the design for the Gropius door handle was created in 1922 in his private construction studio in Weimar with the significant participation of his colleague Adolf Meyer (1881–1929). Instead of the angled square bar, these door handles had a conical handle neck that attached to the square bar at right angles. The Berlin bronze foundry SA Loevy secured the sole manufacturing rights from Gropius in 1923. This was followed by the "Dessau Bauhaus handle", which differed from the Weimar handle in its size and a clear step between the square bar and the roller handle. The Gropius handle was produced by numerous building hardware manufacturers, but not under this name after copyrights were rejected in court proceedings because, in the opinion of the Court of Appeal, the handle did not have a sufficient artistic design. Today she is one of the design icons of the 20th century. In 2012, the name “Gropius handle” was secured as a brand in connection with building fittings.

In Austria (especially Vienna) a door handle from the 19th century is common, which is known today as "Old Vienna". This model is relatively simple and made of brass, it is produced by various suppliers and, on request, not only according to the Ö standard, but also according to the DIN standard.