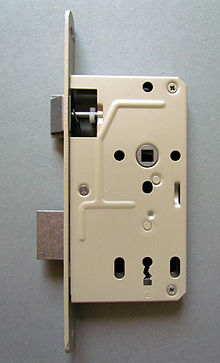 In the horizontal design, the nut and keyhole are arranged side by side.

Mortise one can warded - Zuhaltungs- or cylinders have factory closing or via Badriegel blocked. Compared to the historical box locks that were attached to the inside of the door, mortise locks cannot be seen when the door is closed and therefore cannot be manipulated from the inside. On the other hand, the door leaf is weakened by the recess necessary for the mortise lock.

Alternatively, there are the recesses in the Zuhaltungsblech itself, which is raised by the key rotation to a fixed on the bolt lock pin release (turn pin), and thus to enable the movement of the bolt. Chubbschlösser contain several of these tumbler plates, which are lifted to the correct height by the respective shoulder of the stepped (serrated) beard of the associated tumbler key in order to release the bolt.

Selection of the opening direction

When choosing a mortise lock, pay attention to the opening direction of the door. The manufacturers usually identify the opening direction as "R" (right) or "L" (left) in the article description. If the latch can be turned (on the removed lock), the lock can be used for doors that open on the left as well as on the right (see illustration).

Turning the latch is now usually possible without opening the lock housing, but usually only when it has been removed. Often a small slide, which protrudes in one of two recesses on both sides of the housing, has to be pushed to one side and then back again. To turn the latch, it must either be pushed deep into the housing or pulled out; the hammer-shaped double-sided driver and the wedge-shaped latch itself can only be rotated 180 degrees around the displacement axis in one of these positions.

Suitable for a door that closes on the left, the pointed edge of the latch is on the left when looking at the faceplate.

Backset: Distance from the center of the keyhole and square pin to the outer edge

The backset describes the distance from the center point of the keyhole and square pin to the outer edge of the faceplate. It is usually given in millimeters. Backsets are usually in the range of 20 to 100 mm. 55 mm is normal for wooden room doors, 65 mm for solid house doors, 24/30 mm for (glazed) tubular frame doors and 40–45 mm for fire doors made of metal.

To select the right door fitting (handle set), the distance between the center point of the axis of rotation (square) of the door handle and the pivot point of the lock cylinder must be taken into account. In Germany, this is usually 72 mm for room doors with tumbler keys and 72 or 92 mm for doors with profile cylinders (PZ). Distance dimensions between 47 and 110 mm are also available as custom-made products.

The square dimensions of the handle follower have been reduced to three common dimensions in Germany in recent decades: 8 × 8 mm for room doors, 10 × 10 mm for house and robust apartment entrance doors and 9 × 9 mm for fire doors and panic locks . Internationally, the size of 8 × 8 mm is the most common. In contrast, toilet bars can have quite different dimensions, down to 5 × 5 mm (England). In addition to the dimensions given in the table, the dimensions 7.6 × 7.6 mm are rarely used.

The faceplate (also: the faceplate ) of a lock is the sheet metal part that is still visible after installation and is embedded in the door edge. It usually has two holes for the fastening screws of the lock, two recesses for the latch and the bolt and, if necessary, a hole below the bolt for the fastening screw of the profile cylinder. The width, length and thickness of the faceplate, the design of its ends (round or rectangular) and the distance between latch and bolt are not uniform. Typical are e.g. B.