The M107 is a heavy self-propelled gun that was used by the United States Army primarily during the Vietnam War .

In the 1950s, the existing self-propelled guns ( M55 with 203 mm howitzer, M53 with 155 mm gun), which could not be transported by air due to their heavy weight and only had a limited range, were to be replaced by a new, uniform chassis. The Pacific Car and Foundry then designed a new chassis. Six prototypes were built; In addition to three 203-mm howitzers T236 and a 155-mm T245 gun , two prototypes T235 with a 175-mm cannon were created, from which the M107 emerged after a two-year test period. Series production of the M107 gun began in 1962 at the Pacific Car and Foundry Company and continued until 1980 at Bowen-McLaughlin-York and the FMC Corporation . The 203mm tube version was designated the M110 . 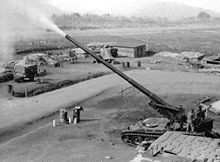 Change of pipe or piping

The chassis, which is also used for the M578 armored recovery vehicle and which can be converted into an M110 howitzer by casing , consists of welded steel plates up to 1.3 cm thick. With the exception of the armored driver's seat, which is located in the front left, the vehicle has no protection whatsoever against splinters and fire for the crew.

The drive is effected via an eight-cylinder - V-engine ( two-stroke diesel engine ) 8V71T from Detroit Diesel with 298 kW (405 hp). The chain drive with 46 cm wide caterpillar tracks had torsion bar springs . It has spring lock cylinders that are locked for fire fighting in order to prevent the gun from deflecting and jumping when the shot is fired.

On the chassis is the mount that carries the 175 mm M113 cannon barrel with a 10.6 meter barrel length . Because of the heavy top-heaviness of the long pipe, it is withdrawn for driving on the pipe cradle. In the fire fight, the top-heaviness is equalized by nitrogen-filled equalizers on the left (see picture) and on the right of the pipe, so that the pipe can be raised and lowered with the same amount of force.

The recoil when firing is dampened by a hydraulic barrel brake , the remaining recoil energy is diverted into the ground by a hydraulically lowerable shield. After the end of the return, the pipe is brought into the starting position by the pipe retriever . The swivel range of the tube is 533 lines (approx. 30 °) on each side, the height field is 1160 lines (65 degrees; from −2 ° to + 63 °).

To load the gun, the ammunition gunners use the hydraulic rammer, which presses the grenades weighing up to 66 kg with their guide ring into the transition cone of the barrel. The lock is a rotatable and pivotable screw lock with a bayonet thread.

On the self-propelled gun there are five seats for gun leaders, directional and ammunition gunners (K1 to K4). The US gun group therefore included an M548 tug; In the German Armed Forces, the gun group was equipped with a crew transport vehicle Lkw 7t gl or Lkw 7t mil gl . In the Bundeswehr two shots were carried on the self-propelled gun; another 30 shots on the support vehicle. Equipment not lashed to the tub was carried in equipment boxes hanging from the ground spur . 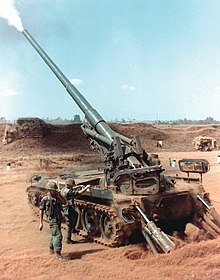 The M107 was mainly used during the Vietnam War, where it supported American operations as a long-range support weapon (firing range up to 33 km). Among other things, they fought fire duels with North Vietnamese guns across the demilitarized zone between North and South Vietnam. During the Battle of Khe Sanh , the guns supported the trapped Marines from the Rockpile and Camp Carrol firebases .

In the early 1980s, the M107 was taken out of service by the US Army. Some were rifled to M110 guns with 203 mm barrels. In some other countries the gun is still in service.

In the Bundeswehr , the M107 was introduced into the field artillery battalions of the artillery regiments of the army divisions from 1964. In the 1980s it was rerouted to the M110 or retired.

Specification of the gun