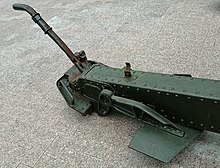 A ground spur is a weapon component that is used to support the weapon in the ground. It is used in guns and handguns , with the spur being constructed differently in the two types of weapon and having a different function in each case.

The ground spur is attached to the mount and serves to divert the recoil moment into the ground, to hold the weapon in the firing position, to stabilize it and to make it easier for the gunner to fire. In the case of self-propelled guns, it is usually so large and heavy that it has to be operated hydraulically. An earth spur is attached to each spar of the spreading carriage.

Guns are usually heavily used in artillery combat. The recoil when firing causes the gun to shift so that the gunner has to realign the gun. The earth spur was developed to make this work easier. This device was attached to almost all guns towards the end of the 19th century. It was a shovel blade that was attached to the end of the spars or the spar. It had to be buried as deep as possible in order to be ready for fire. As a result of the recoil, the shovel blade dug further into the earth and thus prevented the cannon from moving or minimized it so that it was easier to re-serve it, for example in the event of direct fire.

In order to absorb the recoil of the gun a little more gently, attempts were made until 1898 with mounts in which the ground spur was spring-loaded. The gun was able to retract for a moment before being pushed back into position. Since the system brought little improvement and in 1897 the French 75 mm cannon M1897 appeared with a barrel return , which made the suspension superfluous, it was not further developed.

The corresponding component in high-speed artillery ( grenade launchers or nowadays mortars ) is called the base plate.

Smallarms the Erdsporn on some light is machine guns (LMG), for example, the French AA-52 , and sniper rifles used the over two legs have. The earth spur is mounted vertically under the shoulder rest and is used to be able to put the weapon on, so that the shooter does not have to hold it in the shoulder stop for a long time while waiting for a target. This makes it easier to aim at the target over long periods of time in the prone position.

Such ground spurs are sometimes also called monopods and in the English-speaking world monopods (as opposed to English bipod for bipod). As a rule, they can be adjusted in length so that the weapon can roughly be aimed at the target.

Pioneering machines such as B. Armored recovery vehicles also have a component called a ground spur. Here the earth spur is not used to absorb the recoil, but to additionally support the vehicle against the pulling force when pulling another vehicle with the cable winch .