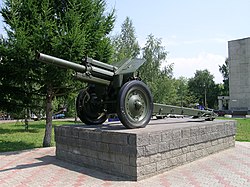 The M 1938 was captured in large numbers by the Wehrmacht during the German attack on the Soviet Union and put into service under the German name heavy field howitzer 396 (r) (r for Russian). The gun was used in particular on the Atlantic Wall , but also in divisions on the Eastern Front. The German side later started with the reconstruction of the ammunition.