The Bergepanzer Buffalo or Bergepanzer 3 ( BPz3 ) belongs to the group of combat support vehicles . It is a bilateral development of the German Armed Forces and the Dutch Army based on the Leopard 2 main battle tank .

Then the company MaK (since 1992 Rheinmetall Landsysteme ) developed the armored recovery vehicle 3 "Büffel" on the chassis of the Leopard 2 with the aim of using as many components of the base vehicle as possible.

Between 1992 and 1997, 75 vehicles were manufactured for the German Armed Forces, with Krauss-Maffei Wegmann as the general contractor of the Leopard-2 platform, supplying significant shares. Another 25 vehicles with the designation Bergingtank 600kN BÜFFEL went to the Dutch army.

In 2012, armored personnel carriers for use in Afghanistan were retrofitted with the SPECTUS (“SPECtral Technology for Unlimited Sight”) driver vision device from Carl Zeiss Optronics. The system, which can be used as a forward or reverse camera, allows the driver a better view under full armor protection thanks to a thermal imaging camera and the residual light intensifier camera arranged in parallel.

The buffalo is used in the Bundeswehr in all tank battalions with the Leopard 2 and in the armored artillery units with the Panzerhaubitze 2000 as well as in army repair logistics . The range of operations includes the recovery and towing of tracked vehicles up to military load class 60 ( MLC 60 ), the securing of tracked vehicles when driving through bodies of water, operational support for repair work, the recovery of battle tanks with rapid recovery equipment under armor protection, the clearing of obstacles and earthworks in an emergency. As with the Bergepanzer 2, the Buffalo can carry a replacement engine for the Leopard 2 on its rear. For self-defense , the three-person crew has an MG3 machine gun and a smoke-throwing system . An NBC protection system enables the buffalo to be used in contaminated terrain.

In order to meet the requirements placed on the vehicle, the Büffel has a crane system that can be rotated 270 degrees and is connected to the Leopard 2 chassis at the front right . The main and auxiliary winches required for recovery are located in the armored superstructure, which is also a combat area for the crew. The armored recovery vehicle gets the power it needs from a twelve-cylinder diesel engine from MTU .

A special feature compared to the Bergepanzer 2 is the rapid recovery device. For this purpose, towing shears with spring assemblies are attached to the clearing and support shield, which can be operated under armor protection. The towing shears are carried in individual parts at the rear and on the side. Another special feature of the Büffel is that with an electrically driven boom, it can lift its own engine and replace it with a replacement engine. Additional equipment includes an electric welding system and various tools, which also enable minor repairs on site. 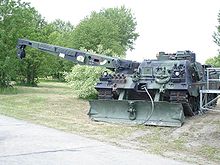 In addition to Germany and the Netherlands , the buffalo is also used in Switzerland (25 pieces), Spain (16 pieces), Sweden as a performance-enhanced variant under the name Bgbv 120 (14 pieces), Singapore and Greece (12 pieces). In addition to the Buffalo as a complete vehicle, Rheinmetall Landsysteme delivered 150 kits of mountain-specific assemblies of the system to South Korea , where they were installed in the K1 ARV armored recovery vehicle used by the local military . The armed forces of the United Arab Emirates received 46 and France 22 for their Char de Dépannage DNG / DCL armored recovery vehicle on the Leclerc chassis.