The M41 Walker Bulldog was a light tank from American production. Among other things, he served in the US Army during the Cold War from 1952 to 1965 and is still in service in several other armies today. The name of the tank goes back to the US American General Walton "Bulldog" Walker , who died in a car accident in the Korean War . 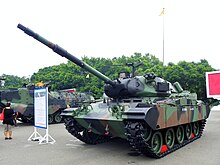 The M41 was the successor to the M24 Chaffee , which had proven to be well armed but insufficiently armored. The first prototypes of the design were developed from 1947. In 1951, production began at the Cadillac armor factory in Cleveland , Ohio . As early as 1953 he had completely replaced his predecessor in active service in the US Army.

The views of the American armored troops on the M41 were divided. On the one hand it had a good combination of armament, speed and armor and was easy to operate, on the other hand its engine system and its tracks were very noisy at high power. In addition, the gasoline-powered engine consumed a lot of fuel. Likewise, the tower could only be turned by hand in the side straightening area.

Production of the M41 ended at 5500 units. In 1965, the US Army tanks of this type were sold to South Vietnam . The M41 also went to Brazil , Uruguay , Chile , Denmark , Thailand and Taiwan . The Bundeswehr used the M41 from 1956 to 1969 as a tank destroyer and reconnaissance vehicle . In Taiwan, the M41 was extensively modernized under the designation M41D and is still in service there as a reconnaissance tank. The Chilean armed forces also demonstrated the vehicle at the 2009 military parade.

The first war use of the M41 took place in April 1961 in small numbers during the invasion of the Bay of Pigs in Cuba . Coming in from the CIA supported attack by Cuban exiles against revolutionary government of Fidel Castro but failed. Most of the vehicles were captured by the Cuban government troops. Immediately afterwards, one copy was given to the Soviet Army for evaluation ; another vehicle has been preserved as a memorial in Cuba to this day.

During the Vietnam War , the Walker Bulldog was in combat with the South Vietnamese army several times. Although, like its predecessor, it was overall too light for attack tasks, it was able to achieve successes in reconnaissance and security missions against North Vietnamese vehicles up to the size of a T-55 .

The M42 Duster anti-aircraft tank and the M52 armored artillery vehicle with a 105 mm howitzer were based on the M41 . Furthermore, assemblies of the M41 were used for the M75 APC personnel carrier.