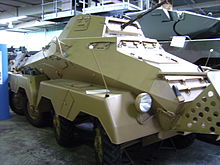 Special vehicle requirements are placed on a reconnaissance tank. Compared to heavy armored vehicles, which, depending on their type, are directly in combat, reconnaissance tanks must have properties such as high mobility, low noise levels and extensive telecommunications equipment. Camouflage is also an essential part of vehicle classification.

Some of these properties can only be achieved at the expense of armor or heavy armament. Since the Second World War , reconnaissance tanks have often been wheeled vehicles due to their low noise level.

An example is the former German Luchs armored reconnaissance vehicle , equipped with silent multi-fuel engine , strong far-reaching short-wave radios and a 20-mm automatic cannon . Furthermore, the lynx was originally able to swim. However, the armor was relatively weak and only protected against light infantry ammunition. The successor of the lynx, the Fennek scout vehicle , is currently in service with the German armed forces.

Modified reconnaissance tanks are also used in the context of blue helmets by the United Nations and in SWAT police special units, because as armored vehicles they are similar to heavy trucks in terms of weight distribution and, like them, can also drive on unpaved roads and are air transportable.