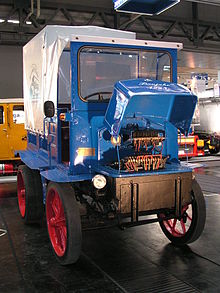 The range basically describes a distance at which a subdivision into local and long-distance traffic of all modes of transport is made. In common parlance, the range usually refers to the maximum distance within which a vehicle (e.g. airplane, car, ship) can be moved without refueling .

Many types of vehicle (trucks, cars, etc.) can increase their range if they drive with a forward-looking, defensive driving style in an energy-saving manner and, if necessary, reduce their speed by rolling out early instead of braking hard.

For example, in the case of warships and military aircraft, instead of the range, the so-called action radius , sometimes also the deployment radius , is given as an important variable. This is half the range - i.e. the maximum distance that a vehicle can cover if it is to return to the starting point without having to bunker or refuel in between. For sailing ships , the range refers to the journey with the engine.

In contrast to watercraft , rail and road vehicles , weight always plays a major role in aircraft ; In the case of large commercial aircraft , the weight percentage of the fuel in the take-off weight is often over 50%. For extremely long distances , payload capacity must therefore be exchanged for fuel capacity. Often there are special aircraft variants for long ranges that are equipped with extended wings , which therefore have better aerodynamic quality (for example Boeing 777 ). The jet stream can be used on certain routes ; the aircraft then covers a greater distance over the ground at the same flight speed (to the ambient air). In addition, the development of more efficient engines plays a major role in increasing the range.

Military aircraft can often be refueled in the air , for example in order to be able to carry out intercontinental transfer flights. The range can also be increased by increasing the fuel capacity by adding additional tanks at the external load stations or conformal fuel tanks .