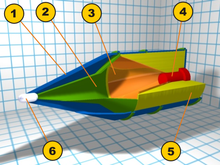 The HEAT grenade has a chemical warhead that is effective against armor, people, buildings, helicopters, bunkers and unarmored or lightly armored vehicles. The warhead consists of a highly explosive charge wrapped around a conical metal case. As soon as it detonates, the charge causes the metal cone to collapse rapidly towards the center of the projectile. The metal (previously mostly copper, today various alloys) is cold-formed and accelerated to a speed of up to Mach 25. This “metal beam” penetrates up to 1,200 mm of homogeneous armor steel. The armoring is not broken by heat, as is often assumed, but by the high speed of the metal beam. The mix-up is due to the fact that when the metal beam is created and penetrated or penetrated, enormous pressure and thus high temperatures are created, which melt the metal. However, this is a side effect and happens after or during the penetration. Due to this mode of action, the impact speed with these bullets does not play a role in contrast to the impact bullet . When armor penetrates, hot splinters of the armor are scattered on the other side, which act against the crew or ignite stored ammunition or fuel.

The bullets currently in use are able to penetrate any type of homogeneous steel. However, only modern projectile types make it possible to break through tanks with composite or reactive armor . Tandem shaped charges have proven to be very effective against reactive armor: The first shaped charge triggers the reactive armor, creating a gap in the armor so that the second charge can penetrate the conventional armor behind it.

In the case of composite armor, the shaped charge spike is mainly disturbed by the changing layers and deflected by the ceramic layers.

HEAT-MP-T stands for H igh E xplosive A nti- T ank M ulti- P urpose T racer . It is a multi-function armor-piercing ammunition (in most cases in the 120 mm caliber) which is used by battle tanks . It is used by the USA (M830A1, the M830 is retired) and Germany (DM12A1). The currently most powerful shaped charges carry the rocket launcher 9K135 Kornet and 9K123 Chrisantema the Russian army . They penetrate 1,200 mm armor steel or 1,000 mm armor steel behind reactive armor. The warhead consists of a wing-stabilized steel body which is loaded with A3 Type II explosives. The grenade has several fuses (tip, shoulder and tail) to guarantee reliable ignition at different angles of impact. A proximity fuse can also be set manually, which for the first time allows tank crews to effectively combat helicopters with the 120 mm main cannon.