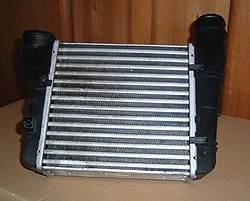 The intercooler of an Audi 1.8 Turbo

A charge air cooler (abbreviation LLK, English intercooler ) is a heat exchanger that reduces the temperature of the combustion air supplied to the engine in the intake tract of a supercharged internal combustion engine. It is installed in the intake tract between the compressor (compressor wheel of a turbocharger or compressor ) and the inlet valve and dissipates part of the heat that is generated by the compression of the air in the turbocharger.

The aim is to increase the performance and efficiency of the engine. By reducing the temperature of the supplied air, the same volume contains a larger air mass, which means that proportionally more fuel can be burned. The intercooler thus increases the possible output power and increases the efficiency by lowering the initial temperature in the Carnot process .

Charge air cooling is already mentioned in the German Reich patent 95 680 with priority from March 6, 1896, which was granted to Rudolf Diesel.

This means that the mass of air required for combustion can be increased in two ways:

The increasing air density causes the following in the combustion chamber:

Disadvantages of the intercooler are:

Charge air coolers themselves are either air or water cooled. With the latter, the heat is transferred to its own cooling circuit. There are also other variants, for example the cooling effect of an air-cooled intercooler can be increased by spraying it with water, but this is only possible with engines for racing (e.g. in the WRC ) due to the additional construction and maintenance effort . However, since local vehicles have to be derived from road vehicles and homologated , this technology is already found in normal cars, such as the Subaru Impreza WRX STi .