Breitenfurt near Vienna is a market town with 5894 inhabitants (as of January 1, 2020) southwest of Vienna in the Mödling district in Lower Austria .

Breitenfurt is located directly on the border of the city of Vienna, in the Vienna Woods in the Valley of the Rich Liesing and includes its source area. Geologically, it is located on the southern edge of the Laaber Platte in the flysch zone and borders the Kaltenleutgebens limestone massif . In terms of area, the municipality is one of the largest in the district and therefore only has a population density of 197 / km². The place has great differences in altitude and is between 260 and 592 meters above sea level.

The district of Breitenfurt-Ost, in particular, represents an “in-between town” in terms of urban geography, which cannot be described as either urban or rural. It is spatially in the transition area from the urban space of the city of Vienna to the rural area and is also in a process of transformation over time. The district is characterized by urban features such as high population density and compact development, but also characterized by generous greenery, numerous leisure areas and a strong relationship to the landscape.

Breitenfurt is a scattered settlement that consisted of 12 isolated individual settlements after the Second World War. Lt. Before 2001, in addition to the main town of Breitenfurt-Ost, there were the Rotten Großhöniggraben , Hochroterd , Linker Graben and Rechter Graben, the settlements of Hirschentanz , Breitenfurt-West, Eigenheimsiedlung, Kleiner Semmering and Ostend as well as several individual homesteads. In 2001 the community consisted of just one village of the same name.

In addition to the state border with Vienna, a district border runs between the districts of Mödling and St. Pölten on the north-western boundary of the municipality of Wolfsgraben. In addition, Breitenfurt has shared municipal boundaries with the municipalities of Laab im Walde, Wienerwald and Kaltenleutbaren within the Mödling district.

Breitenfurt was founded relatively late and appears in documents for the first time in 1622 as a populated area, while until then Breitenfurt was only in use as a field name. Up until the Turks' storm in 1683 there was an imperial hunting lodge in what is now the municipality, which as a ruin still adorns the town's coat of arms. After the Turkish siege, there were still 20 houses in Breitenfurt. However, the area was soon populated with settlers from Salzburg, Bavaria and Styria. The residents were mainly woodworkers who lived in 42 houses in 1721. Another 32 houses were in other parts of today's community. In the years from 1714 to 1732 the accountant and Ministerial Banko Deputation Gregor Wilhelm von Kirchner had a baroque castle built in the village, which was almost completely demolished in 1796 and of which only the parish church (former castle chapel) remains today.

In 1848 Breitenfurt became an independent municipality and in 1850 elected the first mayor. As a result, the place developed into a popular destination for the nearby urban population of Vienna, so that u. a. the hospitality industry flourished. In connection with this, among other things, there was a plan in 1898 to build an electric railway from Liesing via Kalksburg to Breitenfurt. After the initial enthusiasm of affected or interested communities, the further question of costs in particular may have thwarted the project.

Construction site of a row house settlement in Breitenfurt 1976, example of the steadily growing population since the 1970s

With the growing population around the turn of the century, more and more businesses opened shops in the village, which was finally granted market rights in 1930 . Until 1938, Breitenfurt belonged to the Hietzing-Umgebung district before, after the National Socialists came to power, the place was incorporated into the city of Vienna like many other places in Lower Austria and became part of the 25th district of Greater Vienna . It was not until 1954 that Breitenfurt became independent again and fell back to Lower Austria, where it was assigned to the Mödling district . 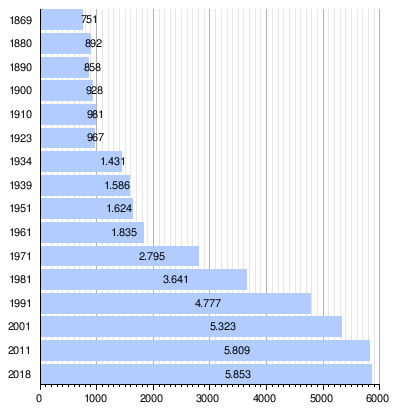 The municipal council has had 29 members since 2005.

Cities and municipalities in the Mödling district

Community structure of Breitenfurt near Vienna