Loipersdorf-Kitzladen is a municipality with 1327 inhabitants (as of January 1, 2020) in Burgenland in the Oberwart district in Austria . The Hungarian place name of the municipality is Lipótfalva-Kicléd .

The municipality is located in southern Burgenland in the Stegersbach valley on the border with Styria.

The municipality includes the following two localities (residents as of January 1, 2020):

The place was first mentioned in a document in 1334. Like all of Burgenland, it belonged to Hungary (German West Hungary) until 1920/21 . Since 1898 had due to the Magyarization of the government in Budapest of Hungarian name Lipótfalva-Kiczléd be used.

After the end of the First World War , after tough negotiations, German-West Hungary was awarded to Austria in the Treaties of St. Germain and Trianon in 1919. The place has belonged to the newly founded state of Burgenland since 1921.

For several years there has been a hospice for sick children in the village, the Sterntalerhof . 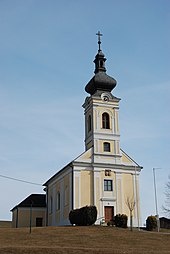 The council comprises a total of 19 members based on the number of eligible voters.

Mayor is Thomas Böhm (ÖVP). After Hans Oberhofer (SPÖ), who had been mayor since the 2002 election, resigned from his position at the end of 2016, Jürgen Zimara (SPÖ) took over management of the community following a resolution by the municipal council. After the direct mayor election on October 1, 2017, Zimara was ahead of Vice Mayor Böhm with 44.26%, who brought it to 43.14%. Marco Sailer (FPÖ) was out of the race with 12.60%. In the runoff election on October 29, 2017, Böhm prevailed with 53.54% against Zimara with 46.46%. The ÖVP candidate succeeded in breaking the 30-year supremacy of the SPÖ, which had already lost 16.12 percentage points in the municipal council election.

Cities and communities in the Oberwart district