German Schützen-Eisenberg (Croatian Livio-Čjeka , Hungarian Németlövő-Csejke ) is a municipality in the Oberwart district in Burgenland in Austria .

The community is located in southern Burgenland.

The localities of the municipality are (residents in brackets as of January 1, 2020):

In the 13th century , the Cistercians founded the Pernau monastery in the area of ​​Deutsch-Schützen, the last remains of which were demolished in 1799. Originally the settlement Perwolff , which is said to have been destroyed in 1274, was located here . The name Perwolff goes back to the Carolingian era. Displaced archers of the Hungarian Gyepű system probably settled in another place of the Hotters, today's German Schützen. This place was first mentioned in a document in 1289 as belonging to the riflemen . Although he rose to the market square, he did not have his own church, as it remained in its original location in Perwolff. In 1221, Perwolff also included the hotter of Schauka, which was only renamed Eisenberg in the 20th century . Like all of Burgenland, the place belonged to the Kingdom of Hungary as German West Hungary until 1920/21 . Since 1898 had due to the Magyarization of the government in Budapest of Hungarian name Németlövő-Csejke be used.

After the end of the First World War , German West Hungary was assigned to Austria in the Treaties of St. Germain and Trianon in 1919. Deutsch-Schützen has been part of the newly founded federal state of Burgenland since 1921 (see also the history of Burgenland ).

On March 29, 1945, members of the 5th SS Panzer Division "Wiking" and the Feldgendarmerie shot 57 Jewish slave laborers, mainly from Hungary. This final phase crime is known as the " massacre of German riflemen ". A memorial plaque on the St. Martins Church and a memorial stone remind of this act in Deutsch-Schützen today. 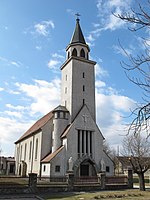 The council comprises a total of 19 members based on the number of eligible voters.

Herbert Weber (ÖVP) was elected Vice Mayor at the constituent meeting of the municipal council on October 21, 2017.

Cities and communities in the Oberwart district