This article deals with the municipality of Lackendorf in Austria. A place of the same name belongs to Dunningen in Germany.

Lackendorf ( Hungarian : Lakfalva , Croatian : Lakindrof ) is a municipality with 593 inhabitants (as of January 1, 2020) in Burgenland in the Oberpullendorf district in Austria .

The community is located in Central Burgenland; it is congruent with the cadastral community of the same name and is the only locality (village) in it.

Later under the Romans, today's Lackendorf was then in the province of Pannonia .

The first written mention of the place took place in 1222 as major Louku . At that time King Andreas II exchanged it together with Weppersdorf from Count Nikolaus Szàk for other properties and awarded it to Count Pousa (son of Botus) for his loyal service in Greece. 1229 doc. Mention "maior Lok", 1482 Lakendorff, 1499 Lägkendorff, 1531 Lägkndorf and 1553 Lackendorf. It is assumed that there is a small lake near the village, which was only likely to have existed when it rained heavily, but was otherwise only a large varnish .

Up to the 15th century the settlement developed rapidly under the Counts of the Athinai. In 1425 Sigismund Athinai left his 14 estates belonging to Landsee , including Lackendorf, the palatine Nikolaus (Miklós) Garai and his wife. In 1482 Ulrich von Grafenegg received the rule of Landsee from King Matthias , his son sold the rule to Baron Sigismund von Weißpriach in 1506. His son, Hans von Weißpriach, who owned the estate until 1548, settled Croats in the villages of Lackendorf, Lackenbach , Horitschon , St. Martin and Unterfrauenhaid after the devastation caused by the Turkish storm in 1532 .

Settlement was completed by the middle of the 16th century. After the death of Hans von Weißpriach, there was a rapid change of owners: 1548–1553 Erasmus, Christoph and Andreas Teuffl, 1553–1561 Nikolaus Oláh ( Miklós Oláh ), Archbishop of Gran and as such Prince Primate of Hungary, 1561–1612 Nicholas Császár and daughter Ursula, who married the Protestant Count Franz Dersffy in 1580. Their daughter married Nikolaus Esterházy de Galantha in 1612 , which made the rule Esterházy's possession.

According to Urbar 1640, Lackendorf had 69 feudal lords, 13 of whom were Hofstätter and almost exclusively had Croatian names. At the beginning of the 18th century, Esterházy's large estates were administratively re-divided into prefectorates, from then on Lackendorf belonged to the Frauenkirchen prefecture .

1848 brought the farmers freedom of class and a new upswing. As one of the last compulsory services, the new 2 km long and 2 m deep trench was created west of the village.

Like all of Burgenland, the place belonged to Hungary ( German-West Hungary ) until 1920/21 . Since 1898 had due to the Magyarization of the government in Budapest of Hungarian name Lakfalva be used.

After the end of the First World War , after tough negotiations, German-West Hungary was awarded to Austria in the Treaties of St. Germain and Trianon in 1919. The place has belonged to the newly founded federal state of Burgenland since 1921 (see also the history of Burgenland ).

On January 1, 1971 Lackendorf was part of the " community structure Improvement Act " by a decision of the Burgenland government raiding and Unterfrauenhaid for new "congregation Raiding Unterfrauenhaid" united . This amalgamation, perceived as compulsory by the population - the majority of those eligible to vote wanted a union with Lackenbach  - was never really accepted. The residents of Lackendorf always felt disadvantaged within the large association, not least because of the loss of their community name.

The state government saw it as a sign of the seriousness with which the large community maintained the equality of all districts when the Raiding-Unterfrauenhaid district council decided in May 1977 to tackle the mortuary halls (mortuary halls ) in all three districts at the same time to be completed together  - and to hand them over to their destination on October 29, 1978, in three consecutive ceremonial acts.

Due to the ongoing resistance and since at the beginning of 1988 more than 90% of the Lackendorf local population had spoken out in favor of a municipality separation, the Raiding-Unterfrauenhaid municipal council passed a unanimous decision on September 23, 1988 to separate all three districts and, after clarifying the Question of the separation of assets , on April 27, 1989 the application for separation submitted to the office of the state government. The large community was subsequently dissolved again by ordinance of September 6, 1989 on January 1, 1990, whereby Lackendorf - like Raiding and Unterfrauenhaid - again became an independent community following the boundaries of the cadastral community. 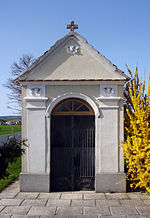 The council comprises a total of 13 members based on the number of eligible voters.

The municipal treasurer is Manfred Gmeiner (SPÖ) and the environmental councilor is Ernst Bauer (ÖVP).

Mayor is Werner Hofer (SPÖ), who succeeded Robert Sellmeister (SPÖ) in 2012, who has headed the community since 1987. In the direct election of the mayor on October 1, 2017, Hofer was confirmed in office with 57.27%. He achieved 4.06% more votes than his SPÖ. His competitor Andreas Bauer (ÖVP) received 42.73% of the vote. Bauer was elected deputy mayor at the constituent meeting of the municipal council on October 13, 2017.

Head of office is Otto Scheu.

Axel Corti shot the film here in 1974 The son of a farm worker becomes a construction worker and builds a house . The name Lackendorf is also mentioned in one scene.

Cities and communities in the Oberpullendorf district