The title of this article is ambiguous. Further meanings are listed under Lambach (disambiguation) .

Lambach is a market town in Upper Austria on the Traun in the Wels-Land district in the Hausruckviertel with 3605 inhabitants (as of January 1, 2020). The Benedictine Abbey of Lambach Monastery, founded in 1056, is significant .

Lambach lies at an altitude of 367  m above sea level. A. in the Hausruckviertel. The community belonged to the judicial district of Lambach until 2012 and has been part of the judicial district of Wels since January 1, 2013 . The extension is 4.9 km from north to south and 2.2 km from west to east. The total area is 3.7 km². 10.8% of the area is forested, 48.6% of the area is used for agriculture.

The municipality includes the following four localities (population in brackets as of January 1, 2020):

The community consists of the Lambach cadastral community . 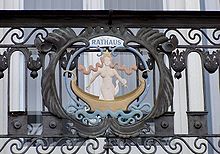 Official description of the municipal coat of arms:

A red barge in silver on a blue, wavy shield base , in it a naked, forward-facing, growing female figure with a golden crown, necklaces and long, loose hair.

The community colors are blue and white.

The coat of arms has its origin in the legend of the virgin Flavia , who was put in a boat on the Ager by her pagan father because of her Christian faith . The boat ran aground at the mouth of the Ager into the Traun . A Christian shepherd took on Flavias and housed her until her father died. This coat of arms is the coat of arms of the Lambach monastery, which was taken over from the market after the abolition of the manor in 1850. The market coat of arms up to that point showed a lamb standing on a piling, wavy brook as a talking coat of arms .

During the Napoleonic Wars , the place was occupied several times.

Since 1918 the place belongs to the federal state of Upper Austria . After the annexation of Austria to the German Reich on March 13, 1938, the place belonged to the Gau Oberdonau . In 1941 the Lambach Monastery was dissolved by the National Socialists and a National Political Educational Institution was housed in it. After the end of the Second World War, the expelled convent returned to Lambach Abbey in 1945.

In 1946 the US Army imported a Coca-Cola bottling plant for its soldiers, unfortunately without skilled workers for the assembly. Austrian engineers worked on it and were able to complete the plant. The drink was initially only for soldiers and US citizens. It is not known when the public sale began. (Source: TV production Austria II)

In 1056 the last descendant of the Counts of Wels-Lambach , Adalbero , converted his parents' ancestral seat into a Benedictine abbey. Adalbero had become bishop of Würzburg in 1045 . He carried out numerous reforms in his diocese, founded and renewed monasteries. In 1089 he and his friend Bishop Altmann von Passau consecrated the first monastery church in Lambach. Since he sided with the Pope in the investiture controversy, he was expelled from his episcopal city and found a place of refuge in his favorite foundation. In 1089 he also saw how Lambach monks moved out to settle in Melk . Adalbero died in Lambach on October 6, 1090. His grave enjoyed great veneration among the people. It was not until 1883 that his cult was officially recognized by Pope Leo XIII. accepted. In the 12th century, the monastery with its writing school was an outstanding center of medieval art. The monastery experienced its greatest heyday during the baroque period. A magnificent early baroque church was built and the entire monastery complex was enlarged. In 2006 Lambach Abbey celebrated its 950th anniversary with an anniversary exhibition. 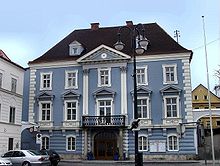 Klaus Hubmayer ( SPÖ ) has been mayor of the community since the 2015 municipal council election . Ing.Johannes Moser ( ÖVP ) and Günter Marischka (SPÖ) as well as Mag. Johann Gibitz ( FPÖ ) act as vice mayors . The NEOS are also represented in the local council.

The cultural life in Lambach is significantly enriched by the cultural association group O2. The cultural work extends to around 40 events per year in the areas of theater, cabaret, readings, O2 jazz club, world music, concerts and events from domestic and foreign folk cultures, etc.

The baroque theater in Lambach Abbey is u. a. known for its own productions of the classical theater subject and an important institution in the Lambach community.

Since 2007 the complete works of Ludwig van Beethoven have been performed in Lambach Abbey in a 10-year project.

Various other associations (including the market music band Lambach-Edt) enrich the cultural life of the place with their activities. 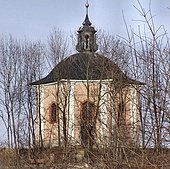 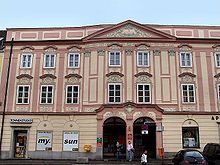 The abbey tavern was built in 1660

In the Lambach power plant , which went into operation in 1999, 73 million kilowatt hours are generated annually, which corresponds to electricity for 17,000 households.

In 2019, Starlim Sterner's third plant (based in Marchtrenk) opened in the Lambacher Feld industrial park.

Lambach is on Wiener Straße (B 1) between Wels and Vöcklabruck . The Gmundener Straße (B 144) begins in Lambach and leads via Steyrermühl to Gmunden . The construction of a bypass around the site has been discussed since the 1960s. In 2006 a north bypass of the center and the start of construction in 2009 could be determined. (Groundbreaking summer 2012-completion planned for 2016.)

The Westbahn ( Lambach station and Lambach Markt stop ), the Lambach – Vorchdorf-Eggenberg local railway and the Trauntalbahn also run through Lambach . The stretch of the Haager Lies , which was closed in December 2009, also led to Lambach.

Today Lambach is an important school location in the Wels-Land district with a wide range of schools:

Persons with a relationship with Lambach

Cities and municipalities in the Wels-Land district