Pöttsching is located northwest of Mattersburg and northeast of the Rosaliengebirge . The municipality is divided into two parts: south of Bad Sauerbrunn there is an uninhabited enclave, the cadastral municipality of Pöttsching-Rosalia. The community also consists of the cadastral community Pöttsching with the village of the same name, which, in addition to the main town, also includes the settlements Hohen-Siedlung, Keltenberg, Pöttschinger See, Römersee and Scheibenwaldsiedlung.

Pöttsching is the oldest settlement in this area, archaeological finds date back to the Neolithic . Before the birth of Christ, the area was part of the Celtic Kingdom of Noricum and belonged to the surroundings of the Celtic hill settlement Burg on the Schwarzenbacher Burgberg . Later in the Roman Empire , the area was part of the province of Pannonia .

During the construction of a railway line from Wiener Neustadt to Sopron in 1847, the first grave sites from the early La Tène period (~ 480 to 280 BC) were discovered. The Landesmuseum Burgenland had to carry out a rescue excavation under the direction of Alois Ohrberger from 1978 to 1980 , whereby a grave field with 42 body burials - some of which were triple and quadruple - was uncovered at the Römersee . Despite recent disruptions due to tillage, a chronological sequence of burials was ascertainable. Similar to the cemetery Pottenbrunn , Loretto or Mannersdorf , for example , this resulted in an uninterrupted occupancy from the 5th to the 4th century BC. Established. The women's graves are furnished with rich grave goods, with jewelry and drinking utensils predominating. The clay pots are usually decorated with stamps, sometimes inside the bowls or on the shoulders of the bottles. A bottle with lying S-stamps in a double row is reminiscent of related pieces from the Sopron-Krautacker and Mannersdorf burial grounds . Comparative style analyzes and material investigations allow the conclusion that they come from a workshop, possibly even from a potter. 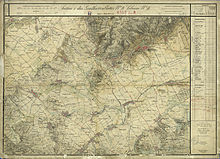 Pöttsching (left) around 1873 (recording sheet of the regional survey )

Pöttsching goes back to an old Petschenegen settlement. Around 1123 the Hungarians settled the eponymous Petschenegen , a tribe from the Black Sea region, as border guards of the Gyepű system .

Pöttsching was first mentioned as Villa Beseneu in a deed of donation in 1223 .

Like all of Burgenland, the place belonged to Hungary (German-West Hungary) until 1920/21 . Since 1898 had due to the Magyarization of the government in Budapest of Hungarian name Pecsenyéd be used.

Pöttsching became the end point of the Wiener Neustädter Canal in 1811 , which was in operation until 1879. This canal was originally intended to be led to Sopron (Ödenburg) in order to bring the coal mined at Brennberg to Vienna . The continuation failed because of the resistance of the Hungarian landowners.

The following table shows the distribution of the casualties by unit and year of war, two of the men died after the end of their wounds:

After the end of the First World War , after tough negotiations, German-West Hungary was awarded to Austria in the Treaties of St. Germain and Trianon in 1919. The place has belonged to the newly founded federal state of Burgenland since 1921 (see also the history of Burgenland ). Pöttsching has been a market town since 1986 (through VO 7).

Interior of the parish church

The "boundary stone" made by the sculptor Karl Prantl from Pöttsching

The council comprises a total of 23 members on the basis of population.

In the direct mayor election on October 1, 2017, Martin Mitteregger (SPÖ) was elected with 50.54% in the first ballot. His competitors were Petra Pankl (ÖVP, 43.55%) and Hermann Loidolt (FPÖ, 5.92%). Mitteregger replaced Karin Lehner (SPÖ), who took office as mayor on February 2, 2017 after Herbert Gelbmann (SPÖ), who had headed the community since 2006, resigned due to illness. Gelbmann has acted as mayor since 2006.

At the constituent meeting of the municipal council in October 2017, Laura Moser (SPÖ) and Petra Pankl (ÖVP) were elected vice mayors.

The head of office is Alexandra Rauner.

Blazon : In a golden shield on a drawn-in red tip a golden church; the tip is accompanied by a red cherry twig with two leaves and three fruits (front) and a red treble clef (back).

The coat of arms was awarded on June 4, 1986. The cherry stands for fruit growing, and the clef illustrates the important role music plays in village culture. Peter Zauner , the composer of the Burgenland national anthem, also comes from Pöttsching.

People related to the place

Cities and municipalities in the Mattersburg district