Ybbs on the Danube

Ybbs an der Donau [ ɪps ] is a municipality in the Mostviertel of the Austrian state of Lower Austria with 5627 inhabitants (as of January 1, 2020).

The name of the city is also known as Ips (also known as Ips Stadt or Ips an der Donau ) in historical documents . Later, the spelling Ybbs on the Danube prevailed. The original origin of the name is unclear.

The city of Ybbs on the Danube lies at an altitude of 224  m above sea level. A. in the south-western part of the Melk district . The location at the transition between Strudengau and Nibelungengau, northwest of the mouth of the Ybbs directly on the Danube , has been secured with flood protection since 2011. Sections of today's Danube Valley were already formed in the middle Tertiary and, depending on the geological-tectonic ground, the section between Ardagger and Ybbs was created. The Danube River cut where rift and fault lines, i.e. softer zones, existed. From a geological point of view, the city has a share in the granite of the Bohemian Massif, which is one of the oldest mountains on the continent. In the area from Ardagger to Ybbs, this primary rock extends beyond the southern right bank of the Danube. This is bordered by a zone with Schliere rocks, marly-sandy deposits from the Tertiary, a by-product of the formation of the Alps. The border runs at a right angle to the river at about the height of the town hall. In the area of ​​the primary rock, west and southwest of the city, on the Hengstberg and the Donauleiten, in Grießheim and Göttsbach and again on the right bank of the Danube in Sarling and Säusenstein, there are slate gneisses, granulite - fine-grained, brittle rocks or graphite-bearing gneiss lenses. Clays, sands, sandstones and conglomerates predominate in the adjoining Schlier rock zone to the south. There is also plenty of gravel deposits from the present.

The municipality includes the following five localities (population in brackets as of January 1, 2020):

There is evidence of a Celtic settlement on a hill near the city - the Marienhöhe (earth wall, sacrificial stones). A scientific review has not yet taken place. During excavations by the Federal Monuments Office in 1962/63, foundations of a previous building, settlement pits and graves of the Hallstatt culture came to light in the southeast of the municipality near the Sarlinger church . Another evidence from pre-Roman times is a bronze sword, dated around 800 BC. Christ. The full-grip sword rarely used in combat is likely to be a sacrificial sword. It was found near the mouth of the Ybbs River in the 1950s and is now in the city museum. A first documentary mention can be found in 837 in the Salzburg chamber books from the end of the 13th century, according to which the Carolingian Ludwig the German donated an area in the Slavic region in Ybbs to the Salzburg Church: "in loco nuncupante Ipusa iuxta Ipusa flumen".

In 10./11. In the 19th century, the Bavarian Counts of Sempt-Ebersberg were wealthy here. They owned castle complexes on the Danube, both in Ybbs and Persenbeug, property and a large farm in the vicinity of Ybbs. In 1037, Count Eberhard von Ebersberg handed over a farm in Göttsbach ("Gorsbach") near Ybbs to the Geisenfeld monastery. The name "Ibseburch" from 1073 indicates that the place was fortified. Over the years, more and more houses have been grouped around the old castle and the name “Ibseburch” has given way to the name “Ips” for the city.

When the Habsburg King Rudolf I moved in in 1276, the city fell away from the Bohemian King and Duke of Austria Ottokar II Přemysl and opened the gates to Rudolf. Rudolf's grandson, Duke Frederick the Fair, was particularly fond of the city. When the nobility of Austria and some cities rose against Friedrich in 1309, Ybbs remained loyal to him. In return, he confirmed to the citizens of Ybbs in 1310 the community forest, which bordered the Freyenstein area and which Konrad von Summerau , lord of Freyenstein Castle, had appropriated. In 1314, after being elected king, Frederick the Fair granted the city the right to embankment. With these and the following privileges, a “golden age” began for Ybbs. Particularly important for the city was the document from 1317, with which Friedrich bestowed the ban on blood on the “faithful dear burgers ze Ybse and the stat daselbs”. Ybbs was unquestionably considered a city at the time.

Because of the favorable location in terms of transport policy, the armies of the Second (1147–1149) and Third Crusade (1189–1192) passed the settlement directly. An extensive movement of people and goods on the Danube also stimulated settlement activity and the economy. Last but not least, the location at the exit of the Strudengau with its formerly feared rapids was decisive for growth. In the Middle Ages, the east-west trade was mainly carried out on the Danube. Ybbs was one of the most important Danube ports and, alongside Linz and Klosterneuburg, one of the three main toll stations. An iron road coming from the Erzberg also reached the Danube at Ybbs. Since 1639, Ybbs was also a salt shop for the salt from the area around Gmunden. The Kaiserin-Elisabeth-Bahn , the Westbahn, was opened in 1858, and electrification took place in 1951. The construction of the Western Railway and the increasing motorization had negative effects for Ybbs, the main traffic passed the city and it became less important.

The municipal council has 29 members. 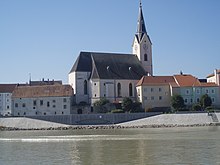 In the northwest of Ybbs is the Ybbs-Persenbeug power plant , the first run-of-river power plant on the Austrian Danube . The largest employer is the large-scale sawmill of Stora Enso Timber (formerly Holzindustrie Schweighofer until August 2001) with around 350 employees. Ybbs is also home to the Ybbs therapy center run by the City of Vienna ( Wiener Krankenanstaltenverbund ) - psychiatric hospital as a hospital for psychiatric illnesses and Schaufler GmbH, a waste disposal company with around 120 employees.

Towns and municipalities in the Melk district

Community structure of Ybbs on the Danube