from Wikipedia, the free encyclopedia
This is the spotted version , flagged on June 1, 2020 . There is 1 pending change that has yet to be viewed.

Hainfeld is a municipality with 3801 inhabitants (as of January 1, 2020) in the Lilienfeld district in Lower Austria .

Hainfeld in 2015, the Kirchenberg can be seen in the background

Hainfeld is located in the Gölsental in the Lilienfeld district in Lower Austria. The area of ​​the municipality covers 44.73 square kilometers. 46.24 percent of the area is forested.

The highest mountain in the municipality as in the entire Gölsental is the Kirchenberg with 924 m. On its north side is the Drei-Hütten-Wanderweg , which leads past the Liasenböndlhütte, Hainfelderhütte and Lindensteinhütte mountain huts .

The municipality includes the following 13 localities (population in brackets as of January 1, 2020):

In the Lilienfeld district :

In the St. Pölten-Land district :

In ancient times, the modern urban area, like the rest of the Gölsental, was part of the Roman province of Noricum .

There is no founding deed for Hainfeld, but the place was referred to as a forum as early as 1280 , i.e. a market, which indicates a certain significance and importance.

Around 1120 the Hainfeld fortress was abolished by Margrave Ottokar II of Styria and a Romanesque fortified church of St. Andreas founded.

In the course of the recatholicization in 1616, after a time in which Protestant pastors had held the church of Hainfeld, David Gregor Corner (who later became the 45th abbot of Göttweig Abbey , Gregor I. Cornerus ) was the first Catholic pastor in the village. However, Corner stayed only half a year until he passed the management of the parish on to Georg Hildebrand Thiermayer.

From the high Middle Ages to the abolition of the manorial rule in the revolutionary year 1848, Hainfeld was always part of the Kreisbach rule and the Lilienfeld monastery rule . A market judge appointed by the landlord was always at the head of local government and the judiciary and was thus a forerunner of the later mayors. From 1848 to 1850 Leopold Kowatsch was the last Hainfeld market judge appointed by the Lilienfeld abbot ( Hainfeld was part of the Lilienfeld monastery, which is why the abbot was also the landlord of the place ). After the abolition of manorial rule, the citizens elected him as the first mayor of the market town. Kowatsch's tenure as mayor lasted from 1850 to 1860.

During the tenure of Mayor Heinrich Zmoll , the Hainfeld party congress initiated by Victor Adler , at which the Austrian Social Democratic Workers' Party was founded, took place here from December 30, 1888 to January 1, 1889 .

On April 22, 1928, a festival meeting of the municipal council had taken place in Hainfeld, chaired by Mayor Ferdinand Benischke (1922-1934), which had ended with a unanimous decision to send a request to the Lower Austrian provincial government to raise Hainfeld to the municipality. In the state parliament meeting on September 26, 1928, this application was approved and the Hainfeld market was elevated to a town.

The town elevation ceremony itself took place on October 20 and 21, 1928 in Hainfeld. The program provided for a welcome evening and a reunion party for the first day, but the main celebration was only the day after with a festive divine service, open concert, festive meeting, subsequent tribute and the unveiling of the Schubert fountain. The event ended with a banquet at the Riedmüller restaurant. The local local historian Hans Reiss had published the commemorative publication “ Our hometown Hainfeld through the ages ” at the request of the municipal administration.

Around the time of the town elevation, Adalbert Fuchs (later as Adalbert II. The 59th abbot of Göttweig Abbey ) was pastor in Hainfeld from 1911 to 1921 .

During the rule of the National Socialists after Austria's annexation to the Third Reich in 1938 , Hainfeld also suffered from their reign of terror. So z. B. was former mayor Karl Gschaider (1919–1922) a victim of the Nazi regime. The first bombardment experienced the place in October 1944 by Soviet fighter planes. A second took place on April 8, 1945. As a result of the fighting, the 1st SS Panzer Division came to Hainfeld on April 18, 1945. From then on, the city was under constant fire from the Soviets. When they withdrew, the SS, in accordance with Hitler's Nero orders , used flamethrowers against the buildings in order to destroy as much of the infrastructure as possible. Nothing should fall into the hands of the Soviet enemy that they could use.

Thus, after the end of the Second World War , Hainfeld was an important industrial location for armaments (including the Schmid screw factory ) and the second most destroyed city in Austria, directly behind Wiener Neustadt .

After the war, Hainfeld was part of the Soviet occupation zone. The first mayor of the post-war period was Ferdinand Benischke from 1945 to 1962, who had been mayor of the town eleven years earlier from 1922 to 1934. 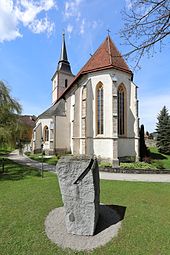 Beer mug in the museum
See also:  List of listed objects in Hainfeld

In 2001 there were 183 non-agricultural workplaces, agricultural and forestry operations 100 according to the 1999 survey. According to the 2001 census, the number of people in employment in the place of residence was 1617. In 2001, the activity rate was 44.72 percent.

There has been an official partnership with the municipality of Issenheim in Alsace, France, since 1974 .

Cities and municipalities in the Lilienfeld district