This article deals with the Austrian community. For the astronomer and mathematician of the same name, see Georg von Peuerbach .

Peuerbach is a municipality in Upper Austria in the Grieskirchen district in the Hausruckviertel with 4650 inhabitants (as of January 1, 2020). The community is located in the judicial district of Grieskirchen .

Since the merger with Bruck-Waasen on January 1, 2018, the municipality now comprises 58 villages, previously 14 (residents as of January 1, 2020):

The community consists of three cadastral communities (area: as of December 31, 2017):

Originally located in the eastern part of the Duchy of Bavaria, the place belonged to the Duchy of Austria since the 12th century . Peuerbach received market rights in 1280. Since 1490 it has been assigned to the Principality of Austria ob der Enns . The place is best known for its role in the Peasant Wars (1625/26). In the politically and religiously confused period between 1620 and 1660, a large number of Peuerbach exiles left their homeland. During the Napoleonic Wars , the place was occupied several times.

Peuerbach is the end point of a branch line of the Linz Local Railway . 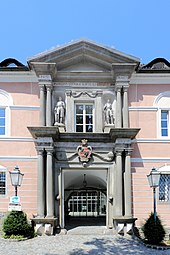 Renaissance portal of the former castle

The Peuerbach New Year's Eve run has been taking place since 1997 , one of the busiest road races in Austria, which was held in Natternbach from 1981 to 1996 .

Due to the merger of the municipalities, the municipal council was dissolved on January 1, 2018. It had 25 members by the end of 2017:

The city council had 7 members:

Blazon (official description) of the municipal coat of arms:

“In blue, a silver, square gate structure with open red gate wings and three battlements with black shooting holes. In the openwork gate opening on a green three-hill starting from the base of the shield, a black raven turned left, a golden oak branch with three acorns in its beak. "