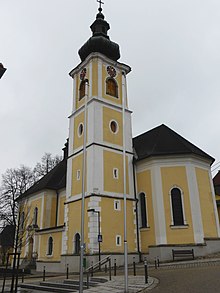 St. Agatha (also Sankt Agatha ) is a municipality in Upper Austria in the Grieskirchen district in the Hausruckviertel with 2131 inhabitants (as of January 1, 2020). The community is located in the judicial district of Eferding .

The municipality includes the following 40 localities (population in brackets as of January 1, 2020):

The community consists of the cadastral communities Königsdorf and St. Agatha.

Blazon : "In silver between four red, six-pointed stars in the corners, a red heart, from which three blue, one to two standing forget-me-not flowers with golden lugs grow on blue stalks ."
The community colors are blue-yellow-red.

The municipal coat of arms, awarded in 1976, shows a motif from the seal of the chief captain of the rebellious ob-der-ennsischen peasants against the Bavarian lien in 1626, Stefan Fadinger , who was resident in St. Agatha on the Fatting am Wald farm .