Michaelnbach is a municipality in Upper Austria in the Grieskirchen district in the Hausruckviertel with 1268 inhabitants (as of January 1, 2020). The community is located in the judicial district of Grieskirchen .

The municipality includes the following 32 localities (population in brackets as of January 1, 2020):

The community consists of the cadastral communities Grub, Haus and Michaelnbach.

The municipal coat of arms is coordinated with the symbol of St. Michael (flaming sword) and the heraldic symbol for water (brook). It is closely related to the place name and was given to the municipality on the occasion of the 850th anniversary in 1980 by the Upper Austrian provincial government.

Blazon : In blue a white, diagonally rising wave bar, covered with a red flaming sword with a black handle. The community colors are red-white-black.

A large number of place and field names in Michaelnbach have Celtic or Roman origins and suggest a settlement around 500 BC. Close. In the year 15 BC The area was taken over by the Romans and officially declared a Roman province in AD 41-54. After the dissolution of Roman rule at the end of the 5th century and the subsequent migration of peoples, the local Celtic population mixed mainly with Bavarians, but also with the remaining Romans and the remains of Germanic tribes from the time of the migration. The Bavarian settlement activity resulted in individual farmsteads and hamlets and the landscape that still characterizes the community today.

The place was first mentioned in a document in 1130 with the name "michilpach". In the middle of the 12th century the Schaunbergers, who were descended from the lords of Julbach, received lucrative imperial fiefs from Emperor Friedrich Barbarossa and a county with its own land rights and special status in the Duchy of Austria above the Enns was created. The Schaunberger Landl, which lies between the Duchy of Bavaria and Austria, to which Michaelnbach also belonged, retained its independence, high jurisdiction and bailiwick until the 16th century. Numerous freelancers from Michaelnbach, who were available to the showmen as vassals, are listed in a land register in Schaunburg, which is only 10 km away. In the 14th century the Schaunberger had to recognize the feudal sovereignty of the Habsburgs. The family died out in 1559 with Count Wolfgang in the male line. Most of the "Schaunberger Landl" was inherited by his sister Anna, who was married to Erasmus von Starhemberg. The term "Landl" is still used today for the Hausruckviertel.

From 1559 to 1624 the parish of Michaelnbach was Protestant and in 1628, after 4 years of pastoral care and the uprisings in 1626, a Catholic vicar was appointed again. During the Napoleonic Wars, the place was occupied several times and was ceded to Bavaria in the Peace Treaty of Schönbrunn (1809). The official handover to King Max I Josef of Bavaria took place on September 19, 1810. The border between Austria and Bavaria ran through the middle of the municipality, with the entire village of Michaelnbach in Bavaria. The localities Stephansdorf, Seiblberg and Oberspaching were administratively subordinated to the Bavarian Unter-Donaukreis, the other localities west of the Michaelnbach and which had become Bavarian to the Salzachkreis. The old borders officially came into force again on May 1, 1816, as laid down in the Treaty of Munich. However, the practice was completely different. In the baptismal register of the Michaelnbach parish, the entries of the villages remaining in Austria and integrated into the St. Thomas parish do not end in 1809, but only from the middle of 1811 and begin again around the middle of 1821. The end of the separate parish is in the death register documented. Pastor Summer wrote there: "By virtue of the highest resolution of his Majesty, from November 1, 821, the boundaries that existed before the year 809 of this pastor, which was divided for almost 12 years, will be observed again". In the First World War 31 Michaelnbachers lost their lives, in the Second World War there were 77 war dead.

On January 1st, 2019, the communities Michaelnbach, Pollham and St. Thomas began working together in an administrative community . 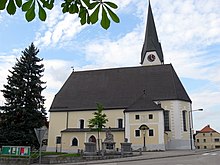