Seekirchen is a town with 10,951 inhabitants (as of January 1, 2020) in Flachgau in the state of Salzburg in Austria . It is located directly on the Wallersee , across from Neumarkt am Wallersee . Seekirchen has been documented for over 1300 years, but has only recently been granted city rights.

People have been living in the municipality of Seekirchen for at least 5000 years ( Neolithic ). Seekirchen was first mentioned in a document by St. Rupert (Bishop of Worms) in 696 . At the hermit house he founded there was also a church dedicated to St. Petrus church, first church and marriage church called, from which allegedly the place name Seekirchen emerged through corruption . Seekirchen is the longest continuously inhabited place in Austria. In 1424 the elevation to the market town took place . On July 1, 1974, the independent communities of Seekirchen Markt and Seekirchen Land were merged to form the community of Seekirchen am Wallersee. Seekirchen was granted town charter on St. Rupert's Day (September 24th) in 2000.

Description of the coat of arms : In a split shield on the right in red a silver bar, in which two forearms growing out of the field edges, wrapped in a golden stole, hold hands together. The right arm dressed in brown (man), the left arm naked (woman). On the left, in blue over a naturally colored wave shield base on a silver floor, a silver church with red roofs. Outside, above the upper edge of the shield, next to each other the black years 1424 and 1974.

Small and medium-sized enterprises shape the economic structure of Seekirchen. Of the approximately 300 companies, more than 90 percent employ fewer than 5 people.

The town center of Seekirchen was able to maintain its trading structure with predominantly small businesses despite the immigration of chain stores.

Over 65 small and medium-sized businesses from trade, craft, gastronomy and service are organized in the Seekirchen City Marketing. The association, financed by the municipality of Seekirchen, the tourism association and traders, has existed since 2004. The main purpose is to revitalize and make the city center more attractive and to organize joint advertising and PR activities. Until 2004, this task was taken over by the advertising association “Kauf in”.

Of the approx. 5000 hectares of the community area, around 4000 hectares are used for agriculture and forestry . 16% of this area (approx. 640 ha) is used for forestry. The remaining 84% are mainly available for grassland use. Of the around 170 cattle-keeping farms, 4,800 dairy cows and around 2,400 young cattle are kept.

Most of the milk produced is processed into Emmental cheese. About 30% of the farms are run as full-time businesses, the remaining 70% as additional and sideline businesses. The ownership structure of the approximately 240 agricultural landowners has hardly changed in the last 70 years. 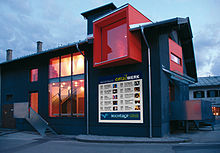 Well known is the football club SV Seekirchen 1945 , which was founded in 1945 and currently plays in the Regionalliga West , the third highest level in Austrian football, and with the brothers Ibertsberger, Thomas Winklhofer and Stefan Lainer even produced four Austrian national football players.

ASKÖ SC Seekirchen 1980 is a fistball club founded in 1980 by Gerhard Strasser, Peter Braunwieser and Manfred Schmidhuber and currently plays in the 2nd Bundesliga. In the youth field, ASKÖ Seekirchen is one of the most successful clubs in Austria with several Austrian championship titles. Lukas Pichelstorfer achieved silver with the U18 national team at the world championships, Andrea Mödlhamer, Veronika Pfund and Lukas Pichelstorfer achieved bronze at the U18 European championships.

Sons and Daughters of the Church:

People related to the municipality: