Anna Maria Walburga Pertl was born in the St. Gilgen Nursing Court (Ischlerstraße 15, 5340 St. Gilgen) and was then consecrated in the old Gothic Vicariate Church. Aegidius von Vicar (1716–1722) baptized Franz Anton Kaltbruner . Godmother was D. Gertrud Seӱwalt , apparently an administrator at the Salzburg cathedral chapter and at St. Peter's Abbey , and hostess in Strobl . Her mother still acted as godmother on December 22nd, 1720, three days before she gave birth: at the baptism of the Baumgarthner parents' newborn twin .

Anna Maria's mother Eva Rosina Barbara Puxbaum , née Altmann (1681–1755), was the daughter of the Vienna-born “kk sworn notary” Dominik Altmann (1636– ~ 1702). Her father, Wolfgang Nikolaus Pertl (1667–1724), came from a rural family, but had completed a law degree in Salzburg. During his student days he performed as a bass soloist in school dramas at Paris-Lodron University . He also worked as a choralist at St. Peter's Abbey and also gave singing lessons. After his appointment as the Archbishop of Salzburg, he first resided in the old Hüttenstein Castle on the Krotensee between Mondsee and Abersee and then moved into an apartment in the newly built office building at Ischlerstrasse 15 in St. Gilgen, today's district court, where Anna Maria was born. When the father died four years after she was born, he left the family in considerable debt.

On November 21, 1747 Anna Maria married the “court and cammer composer” Leopold Mozart in Salzburg . On Thursday, October 19, 1747 they got engaged in the Vicariate Church of Aigen , about a month before their wedding in Salzburg Cathedral . She had seven children with him: Johannes Leopold Joachim (* 1748, died in the sixth month of life), Maria Anna Cordula (* 1749, was six days old), Maria Anna Nepomucena Walburga (* 1750, died in the third month of life), Maria Anna Walburga Ignatia - das Nannerl (* 1751, was 78 years old), Johann Bap. Karl Amadeus (* 1752, was not quite three months old), Maria Crescentia Franziska de Paula (* 1754, died in the second month of life) and Johannes Chrysostomos Wolfgang Theophil - das Wolferl (* 1756, died at the age of 35).

The Nannerl later married one of this grandfather's successors in office, Johann Baptist von Berchtold zu Sonnenburg, and lived with him in the house where their mother was born in St. Gilgen.

With Wolfgang Amadé in Paris 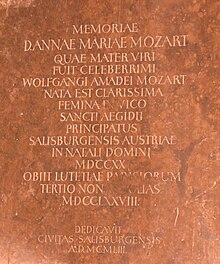 Memorial plaque in the parish church of St-Eustache de Paris

Anna Maria Mozart accompanied Wolfgang Amadé on his city trip (1777–1781) to Paris, where she suddenly died at the age of 58. The purpose of this trip had been to find advantageous employment for her son. His father Leopold had not been granted a vacation for this trip, which is why she had accompanied him in his place.

Anna Maria Mozart had been sick for 14 days at the Auberge des Quatre Fils Aymon (rue du Gros Chenest) in Paris, and had a fever, diarrhea and headache. She fantasized, could hardly speak and lost her hearing "so that one had to scream". According to her son, she died on July 3, 1778 at 10:21 p.m. Mozart's mother was buried in the cemetery of the Saint-Eustache church in Paris. The place where the grave was once is no longer known.

The death of his mother shook Mozart deeply. Several letters that Mozart wrote to his father from Paris, which are still famous today, deal with this tragic event.

In Sankt Gilgen, the Mozart House is a reminder of the Mozart family.