Sankt Vith [ fɪtʰ ] (historically also St. Vieth , French Saint-Vith ) is a city in Belgium in the east of the province of Liège . The municipality with around 10,000 inhabitants is located in the Eifel in the south of the German-speaking Community (DG).

Sankt Vith is home to the DG's service center, a branch of the Ministry of the German-speaking Community for the south of the DG. A total of five municipalities form the canton of Sankt Vith here .

Around 43.7 percent of the municipality's area is forested. There are extensive forests around the village of Recht, which is isolated in the north-west of the larger municipality. The center and the southwest around the town of Sankt Vith and the towns of Rodt and Crombach, on the other hand, are characterized by agricultural grassland. The east of the municipality is again rich in forests: here the river Our , coming from the northeast, initially flows through the area around Schönberg. The river valley itself is used for agriculture, the hills on both sides are forested. The Our flows further to the southwest through the Ourgrund , a scenic valley with six small villages. Finally, at Steinebrück and Lommersweiler, the Our leaves the municipality to the south. In the far east near Amelscheid and Alfersteg, the municipal border also forms the state border with Germany.

The place name can be traced back to Saint Vitus (Saint Vitus). It is not known whether relics of the saint were venerated here at times .

Memorial to the 7th US Armored Division

The origin of St. Vith is not clear. The place is first mentioned in 1130/31 as a church location.

The Austrian Netherlands also included this German-speaking region north of Luxembourg in the western Eifel ( Hohes Venn ). In 1815, St. Vith, which was temporarily ruled by French, was incorporated into the Prussian administrative district of Aachen in what would later become the Rhine province through the Congress of Vienna . Until the end of 1820 St. Vith was the county seat of the St. Vith district and until 1920 it belonged to the Malmedy district .

In 1887 the city was connected to the Vennbahn from Aachen via St. Vith to Ulflingen in Luxembourg . Only one year later, the connection to the Westeifelbahn to Gerolstein was added, and an important economic center developed. By 1917 at the latest, when the connection to the Libramont – Bastogne – Gouvy line was established , St. Vith became an important railway junction with an important repair shop for the German and later Belgian railways . Other stops were in Neidingen, Crombach, Lommersweiler and Steinebrück. In the heyday of rail operations, 30 passenger and 80 freight trains were handled every day, 1200 people were employed in rail operations. 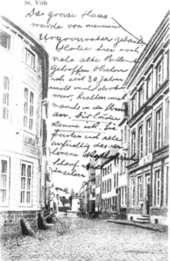 After the First World War were the Treaty of Versailles , the circles of Eupen and Malmedy the Kingdom of Belgium slammed .

The Second World War began for St. Vith on May 10, 1940, when German troops marched in and the present-day eastern cantons of Belgium were annexed by the German Empire . The first acts of war in St. Vith took place on August 9, 1944, during which the St. Vitus Church and the train station were destroyed by bombs. On September 3rd or 4th the city was evacuated; Most of the residents were taken on a refugee route to Hannoversch Münden and Dransfeld in the Altreich . On September 13, US troops entered Sankt Vith without a fight. They left the administration in Belgian hands.

The German Ardennes offensive began on December 16, 1944, including the shelling of St. Viths. The city was defended by the 2nd US Infantry Division under General Bruce C. Clarke until December 22nd; then German troops moved in again. On the two days of Christmas in 1944, Allied bomber groups laid the city of Sankt Vith in ruins. 153 residents and over 1000 soldiers died, almost 600 buildings (over 90% of the existing building) were destroyed or badly damaged. Nine buildings remained intact. The Battle of St. Vith had a decisive influence on the outcome of the Battle of the Bulge, the reconstruction lasted until the 1960s. The new construction of the Catholic parish church Sankt Vitus was consecrated five years after the start of construction on June 14, 1959 by Liège Auxiliary Bishop Wilhelm-Maria van Zuylen . One of the destroyed buildings that has never been rebuilt is the Protestant church that was destroyed at Christmas 1944. Hardly any Protestants lived in the city after 1945. Today St. Vith belongs to the catchment area of ​​the German-speaking Protestant parish in Malmedy , whose St. Matthew Church was completed in 1985.

The town's mighty parish church, consecrated to St. Vitus , was rebuilt in neo-Romanesque style after the Second World War and consecrated on June 14, 1959 by Bishop Wilhelm-Maria van Zuylen . The previous Gothic building was destroyed by Allied bombs at Christmas 1944.

In Wiesenbach, about two kilometers southeast of St. Vith, there is the St. Bartholomew Chapel , built in the 9th century .

The town of Recht , which belongs to the large community , became known for the Rechter Blaustein . A visitor gallery has been located there since 2007.

Between 1999 and 2005, Sankt Vith was the venue for the Alive Festival , where German and international pop and rock bands attracted up to 20,000 visitors to Sankt Vith.

Trade, tourism and the wood processing industry are important branches of the city's economy. In addition, metal processing, furniture and construction are among the economically relevant sectors. The internationally active baking agent manufacturer Puratos, which operates a development department in Sankt Vith, has put together a sourdough collection with samples from all over the world in order to preserve and pass on knowledge of old baking methods.

Agriculture is also still of economic importance in the villages of the greater municipality.

The Roller Bulls Ostbelgien from Sankt Vith play in the wheelchair basketball Bundesliga .

St. Vith has not had a rail connection since the 1980s. Originally, the city was a railway junction on the Westeifelbahn , Vennbahn , the Libramont – Sankt Vith railway and the (Sankt Vith–) Born – Vielsalm line , some of which were built for strategic reasons . The station was completely destroyed in December 1944 in American air raids.

The railway lines have now all been dismantled after their closure and some of them have been converted into long-distance cycle paths . Examples are the RAVeL Route 48 , the RAVel Route 47 or the international Eifel-Ardennes Cycle Route via Prüm to Gerolstein on the international long-distance cycle route Vennbahn (Germany, Luxembourg and Belgium) .

The TEC bus lines connect Sankt Vith today and a. with Eupen and Malmedy .

Municipalities in the German-speaking Community of Belgium