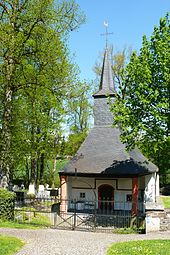 The St. Bartholomew Chapel in Wiesenbach in the Belgian Eifel , about two kilometers southeast of the city of Sankt Vith ( Eastern Cantons ), was built in the 9th century and first mentioned in 876. It is the oldest cultural heritage in the St. Vither Land and has been a listed building since 1937 . The chapel is somewhat hidden under ancient linden trees in a historic cemetery and is surrounded by a natural dry stone wall.

The sanctuary in the St. Bartholomew Chapel

In the past centuries the chapel was known as a place of pilgrimage in honor of St. Bartholomew, the patron saint of tanners and the rural population. People made a pilgrimage there to thank the saint for a good harvest and, above all, to ask for a blessing on the seeds and good yields in the coming year. On Bartholomew's Day , August 24th, the residents of the surrounding villages came in procession and brought natural produce, mostly live chickens, as an offering. Since the admirers of St. Bartholomew were only farmers or employed in agricultural products (such as tanners and wage workers), after the service there was naturally a debate about grain, cattle, forest and their by-products, hides, tan and seeds, and business was also concluded. The vestibule was designed as a kind of exchange for seeds and other agricultural products.

A quote from the Eifel historian Michael Bormann reports on other earlier practices: “Here, according to old, unproven custom, the high judges with Mayer and lay judges of the St. Vith court met every year under a leafy hut erected over the (ancient) hill on Bartholomew's Day where they concluded the feast with a midday meal. This ceremony was last celebrated under the court lord Philips von Baring in 1793. ”Professor Neu has described the vestibule of the chapel in detail as a place of old jurisdiction. A precariousness contract from the year 915 gives first insights into the early, hardly explored past. It documents the existence of a Franconian estate Wison-Bronna between the old Roman road Cologne - Bastogne - Reims and the watercourses Our , Braunlauf Harne- (Enten-) and Rebach (Eiterbach) and the connection of the area to the Abbey of Malmedy - Stavelot .

Origin of the place name Wiesenbach

Michael Bormann, mentioned above, reported five barrows in front of the chapel in 1834 . Old linden trees and an overgrown surrounding wall suggest a sacred grove of the ancestors. The place name Wison-Bronna , handed down in ancient writings, opened up assumptions about a spring sanctuary of a pre-Roman fertility goddess (the Ubic patron goddess Wisona). The Christianization replaced the pagan cult by the St. Lucy, the "bringer of light of faith," and changed the place name on Wisi-Bronna - the best source . The dialect formed the name Wisebesch and the German trivialized Wiesenbach .

The translation report of a monk from Malmedy , embellished with pious legends, describes the historically documented transfer of the relics of Saints Quirinus of Malmedy , Nicasius and Scubiculus from France to Malmedy in 876 . He thus documents their overnight stay in a permanent building in the "Villula Wisi-Bronna" and at the same time mentions the Wiesenbach Chapel for the first time.

Fresco in the St. Bartholomew Chapel

Fresco in the St. Bartholomew Chapel

“A rare pearl”, said the Belgian Queen Fabiola spontaneously during her visit in June 1989. In fact, this modest, secluded chapel with its pillared vestibule hides unimagined, not yet fully explored treasures of cultural and historical value. In 1976 the Breitfeld-Wiesenbach village community celebrated its 1100th anniversary. In 1982 the almost forgotten cultural heritage revealed one of its secrets, as if to thank you for the renewed interest and the active care for maintenance. Hitherto unknown, astonishingly intact wall paintings were discovered under a series of layers of paint. At the same time, a picture painted on wood appeared under a canvas on the altar structure. It represents the three patrons of the chapel: the St. Bartholomew , the holy Luzia and Saint Hubert under the cross .

Archaeological excavations in 1996/97 confirmed and supplemented, with astonishing consistency, historical findings that had hitherto been described as assumptions.