The title of this article is ambiguous. Further meanings are listed under Alfter (definition of terms ) .

Town hall of the municipality of Alfter

The municipality consists of the following five districts:

The village of Alfter was first mentioned in a document in 1067. At that time it was called Alvetra . The place was later called Halechtre (1116), Alftera (1196) and Alffter (1618). Until 1969 Alfter was an independent municipality with the districts Birrekoven and Olsdorf. The submerged town of Pelz belonged to Alfter and only survives under the street name “Pelzstraße”. At times Roisdorf also belonged to the glory of Alfter in the cologne office of Brühl . Alfter has been the northernmost part of the municipality of Alfter since 1969. With 8934 inhabitants it is the largest part of the municipality.

The earth wall system called " Hangmotte ", a former refugee castle, is located between Görreshof Street in the south and Buchholzweg in the north (south of Buchholz Manor ). 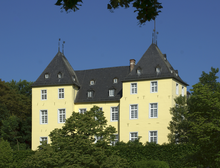 The Castle Alfter came (at the latest) from the 12th century (first mentioned in 1117, Mr de Halechtre). From 1188 onwards, the Electoral Cologne Hereditary Marshal's Office was connected to the property. In the 15th century it came into the possession of the Salm-Reifferscheidt-Dyck family. After the castle was destroyed by fire in 1468, Alfter Castle was given its present form in the 18th century. In close proximity to the castle is the Catholic Church of St. Matthew, as well as a building that, after primary school, has housed the public library of St. Matthew since 1992, and a half-timbered house whose history dates back to the 17th century.

The Jewish cemetery (Beth Olam - House of Eternity) on the border with Bornheim was first mentioned in a document in 1719, according to the memorial stone. The Jewish community in Alfter (it had existed since at least the beginning of the 17th century) was wiped out by the Nazi regime. Alfter took over the care of the cemetery in 1949. It has been a listed building since 1987.

The smaller towns have now grown together with Alfter Birrekoven and Olsdorf, both of whom were never independent. Birrekoven is located in the southwest of Alfter near Gielsdorf. Between this and Birrekoven lie the Mirbach and some fields. Birrekoven has its own small chapel " Mariä Sacrifice ". The “Judas Thaddäus Chapel” is also located above Birrekoven. The Johannishof located above on the Olsdorf Heath belongs to Olsdorf. The Johannishof was a large farm that was managed by Halfen . Today it is the seat of the Alanus University . Olsdorf was also written as Alsdorf in earlier times .

The place on the foothills with 1966 inhabitants was originally shaped by agriculture , until the beginning of the 20th century also by viticulture . Vegetable growing businesses can still be found in the plain on the border with Bonn. The fruit growing that was characteristic of the foothills in the past has almost completely disappeared. In particular, the former vineyard slopes in Gielsdorf were built on on a large scale.

In the town center there are some beautiful half-timbered courtyards in addition to the Catholic parish church of St. Jakobus . These include, among other things, the former court of the elector , where his governor lived. Gielsdorf Castle , a Cologne fief of the Counts of Sayn , used to be on the site of the governor's court . Below the church is the Zehnthof as the original property of the St. Cassius Monastery in Bonn . For centuries it has been owned by the nobility, including the von Groote, von Siersdorf and von Geyr families.

Gielsdorf is home to a music association, the only remaining bachelor association in the community, a fire fighting group of the volunteer fire brigade , the Gielsdorf Möhnen and the sponsoring association “Dorfgemeinschaftshaus Gielsdorf”.

The municipality of Oedekoven, which was independent until 1969, is the third largest district of the municipality of Alfter with 5754 inhabitants. The originally agricultural place is primarily a place of residence in the immediate vicinity of the city of Bonn.

Impekoven is a district of the municipality of Alfter with 2323 inhabitants. Up until the municipal reorganization in 1969, Impekoven was an independent municipality. The last mayor was Karl Schumann. Impekoven is the location of the Catholic Church of St. Mary's Visitation , built by the well-known architect Gottfried Böhm . Since 2000 Impekoven has grown through numerous new development areas.

The district Witterschlick is located in the southern part of the municipality and is the second largest district with 6129 inhabitants. Witterschlick was industrialized in the past after the discovery of clay deposits in the area. 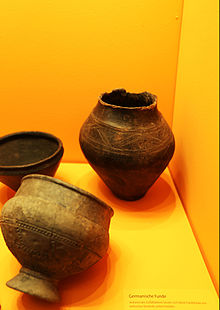 Finds show that the area around Alfter has been inhabited since the Neolithic Age. The area was also populated in the Frankish and Roman times. The places on the foothills have been an important wine-growing area since Roman times. Until the beginning of the 20th century, Pinot Noir was predominantly grown. The first documented mention of the place Alfter comes from the year 1067, that of Impekoven from 1171 and that of Gielsdorf from the years 801 to 814.

Wonderfully country today territory of the municipality Alfter part was the Electorate of Cologne . The place Alfter belonged to the glory Alfter (with Birrekoven, Olsdorf and Roisdorf), which was owned by the Counts of Salm-Reifferscheid , Gielsdorf belonged to the Dingstuhl Gielsdorf, Oedekoven to the Dingstuhl Duisdorf, Witterschlick to the Dingstuhl Godesberg . After the occupation of the left bank of the Rhine by French revolutionary troops (1794) and the introduction of new administrative structures (1798), the villages of the "were Mairie Oedekoven" assigned to the Canton "external Bonn" in the Rhein-Mosel Territory belonged. Roisdorf came to "Mairie Waldorf". At that time, the border with the Rur département ran directly on the northern border of Alfter . After the agreements made at the Congress of Vienna (1815), the region became part of the Kingdom of Prussia , the Mairie was transferred to the mayor's office in Oedekoven in the Bonn district , which also included the Bonn districts of Buschdorf and Lessenich / Meßdorf .

The mayor's office Oedekoven (from 1927 "Amt Oedekoven") went into the Amt Duisdorf in 1937 . The municipality of Alfter was created on August 1, 1969 in the course of the municipal regional reform from the formerly independent municipalities of Alfter, Gielsdorf, Impekoven, Oedekoven and Witterschlick. In 1973/74 the newly formed community of Alfter received a new town hall, which was built on a slight eastern slope as a three-wing, glazed structure in reinforced concrete skeleton construction based on designs by the Stieldorf planning group . At the time of construction it was located on vacant land east of Oedekoven.

Until the 19th century, the population was almost exclusively Roman Catholic . Only in the village of Alfter was there a small Jewish community. Originally there were only the Catholic parishes of Alfter and Witterschlick. In the 20th century, Gielsdorf (1920) and Oedekoven also became independent parishes. Gielsdorf and Oedekoven had previously belonged to the Lessenich parish. The parishes of Alfter, Witterschlick, Gielsdorf, Oedekoven with Impekoven and Volmershoven-Heidgen form the Alfter parish community. The Evangelical Church Community at Kottenforst has existed since 2007 with the Jesus Christ Church, which was built in 1962. Alfter is the 3rd parish of the Evangelical Parish Vorgebirge , to which Bornheim and Hemmerich also belong. The churches in the villages are characteristic and represent sights. There is also a Muslim community in Witterschlick.

The municipal council is the local people's representative body for the municipality of Alfter. The citizens decide on the composition every five years. The last election took place on May 25, 2014.

In 2009, Rolf Schumacher was elected full-time mayor and was confirmed in office in 2014. The first deputy mayor is Luise Wiechert (CDU), the second deputy mayor is Bruno Schmidt (SPD).

The following mayors were elected by the local council:

After Kerstin's resignation from office, the office of community director in Alfter was abolished. The full-time mayor took his place.

Alfter maintains partnerships with the French Châteauneuf-sur-Charente in the Charente department and Beelitz in Brandenburg .

The archaeological monuments in Alfter include the “ Old Castle ” and the “ Witterschlick section fortification ”.

The Rhineland Nature Park , which is partly on the Alfterer area, with the Ville and the foothills, is used for local recreation . There are no larger, open water areas in Alfter, but local / inner-city parks (Jakob-Wahlen-Park, Broich-Park) with small water areas, fed by the Alfterer Bornheimer Bach or its tributaries.

There are also the following adventure trails

One of the community's football clubs, VfL Alfter , played in the Mittelrheinliga , the highest league of the Mittelrhein Football Association and the fifth-highest division in Germany, but this season (2019) only in the state league . The second team of VfL Alfter plays in the district league  B, the second highest division in the football district of Bonn. Like the Alanus University, the Alfter sports field, the so-called forest stadium, is located on the foothills of the mountains on Strangheidgesweg. Artificial turf was laid on the former Tennenplatz in summer 2008 .

The TTC Blau-Weiß Alfter e. V. is one of the oldest table tennis clubs in the West German TT Association. It was created in 1946 from members of the shooting club, whose young members were looking for a new field of activity due to the post-war shooting ban. Since then, the TTC Alfter has been taking part in the games of the West German Table Tennis Association with women's, men's, youth and school teams.

Since the end of 2015, the TB 1906 Witterschlick has been offering football and popular sports as well as American football . Training and playing takes place in the “Stadium in the Tonrevier”. The team plays as "Fighting Miners" in the Landesliga NRW Group South of the AFCV NRW.

The Judoclub-Alfter-Bornheim offers training and tournaments for all weight and age groups.

Alfter is located in a climatically and geologically favorable area, so that many types of lettuce, herbs and vegetables as well as strawberries and rhubarb grow well. In particular, the Alfter asparagus ( “Bornheim” growing area ) was known and in demand nationwide at an early stage. Asparagus in all conceivable variations is therefore part of the menus in local restaurants during the season. Blackberry wine, called rebel blood, is one of the Alfter specialties .

At the Voreifelbahn ( Bonn - Euskirchen ), on which the S-Bahn line 23 runs, there are two stops, Witterschlick and Impekoven, in the area of ​​the municipality of Alfter. In the capital lies Breakpoint Alfter / Alan College of Vorgebirgsbahn where the lines 18 and 68 of the rail network Rhein-Sieg operate. The Cologne regional transport and SWB bus and train services continue to operate in Alfter . Alfter belongs to the tariff area of ​​the Verkehrsverbund Rhein-Sieg (VRS).

The head office of Deutsche Steinzeug Cremer & Breuer AG , the largest German manufacturer of tiles, is located in the Witterschlick district .

The headquarters of the building materials wholesaler "Baustoff Fassbender Tenten", founded in 1931 in Alfter, Holzgasse, is now in the district of Oedekoven and is now the largest building materials dealer in the Bonn region. The company employs around 730 people and has an annual turnover of 170 million euros.

The “Blackberry Wine Cellars Rebellenblut ” has its headquarters in the Alfter district .

Incidentally, Alfter is characterized by agriculture. Around half of the municipal area is agricultural land. In addition to lettuce , vegetables (see above ) and herbs , a large number of small farms also produce cut flowers .

All districts have public libraries:

There is a public bookcase at Herrenwingert .

An open-air hiking theater has established itself in Alfter .

There are exhibits and events on local history in the Haus der Alfterer Geschichte , which calls itself the "Regional Museum".

Personalities who have worked in Alfter

Cities and municipalities in the Rhein-Sieg district