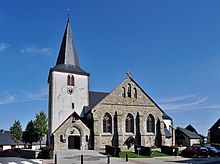 The St. Eligius Church was first mentioned in 1130 and is located in the center of Büllingen.

The municipality of Büllingen borders on the Belgian municipalities of Bütgenbach , Amel and St. Vith as well as the German association municipality Prüm , Eifelkreis Bitburg-Prüm in Rhineland-Palatinate , the municipality Hellenthal , district Euskirchen and Monschau , city ​​region Aachen in North Rhine-Westphalia . In the municipality, Losheimergraben at 677.5 m is also the highest village and the second highest point in Belgium, the White Stone at 692 m.

Around 46.5 percent of the municipality's area is forested. These forests cover the entire north and north-east of Büllingen, and an extensive forest belt extends from north-east to south-west right through the middle of the larger municipality. This divides the community into two main settlement areas: On the one hand the area around the main town Büllingen in the northwest of the large community, where the settlement structure is determined by medium-sized and larger villages. On the other hand, the Manderfelder Land in the southeast, this is characterized by numerous small and tiny villages.

The northern municipality borders on the Elsenborn military training area .

A total of 27 localities belong to the large municipality of Büllingen.

Büllingen was first mentioned in 850 AD as the royal court of Bulinge .

The current municipality of Büllingen was newly formed in 1977 as part of the Belgian municipality merger from the following (old) municipalities:

In the winter of 1944/45, the current municipal area was the scene of the so-called Ardennes offensive (company "Wacht am Rhein") and numerous localities (especially the twin localities of Rocherath-Krinkelt) were almost completely destroyed.

The three original rulership districts that divided the area of ​​Büllingen in the past emerge from the coat of arms of Büllingen: The Trier Cross , the Viandener Bar and the Luxembourg Lion .

Economy and land use

The total area of ​​the municipality of Büllingen of 150.48 km² is divided into the following uses:

The railway line of the former Vennquerbahn was expanded into a hiking and cycling route ( RAVeL network line 45a Waimes-Jünkerath ), with a connection both in Weywertz to the Vennbahn line and in Jünkerath to the German cycle path network.

Municipalities in the German-speaking Community of Belgium

Districts of the community of Büllingen