The title of this article is ambiguous. Further meanings are listed under Mikulov (disambiguation) . 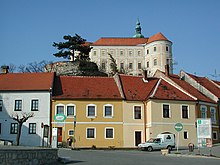 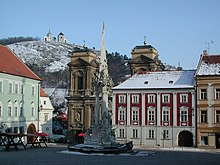 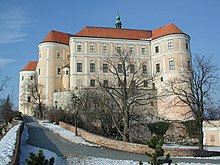 Mikulov (German: Nikolsburg ) is a town in the South Moravia region in the Czech Republic. It is right on the border with Lower Austria . There is a border crossing between Mikulov and Drasenhofen in Austria , seven kilometers to the south .

Mikulov lies between the hill country Pavlovské vrchy ( Pollau Mountains ) and the Milovická pahorkatina , on its territory there are some karst formations with the publicly accessible Turold cave .

The Jakobsweg Weinviertel , which has been signposted since 2010 and is part of the Via Francigena and the Via Slavica and leads to Krems on the Danube , begins on Svatý kopeček u Mikulova ( Holy Mountain near Nikolsburg ) . The Šibeník ( Gallows Pond), located two and a half kilometers southwest of the city center, is the largest fish pond in the Pálava Protected Landscape Area .

Mikulov was probably in the 11th century at the time of the Czech Mark of Babenberger populated German. The Bavarian-Austrian Ui dialect that was spoken there until 1945, with its special passwords , indicates that the settlers came from Austria or southern Germany. In 1182 Moravia became a margravate through Friedrich Barbarossa . After the battle of Lodenitz in 1185, the place came into the possession of Count Wilhelm von Dürnholz. The first documentary mention as "Nikulsburch" is in the deed of donation from 14 January 1249 from Margrave Ottokar II Přemysl to Heinrich I of Liechtenstein , who received the village including Pardorf , Klentnitz , Muschau , Tannowitz , Bratelsbrunn as a fief. This document was expressly confirmed by Ottokar II in 1262. A church was mentioned in 1276. After the Battle of Dürnkrut , Rudolf von Habsburg granted Henry II of Liechtenstein the right to a weekly market “in villa Nicolspurch” on August 24, 1279.

As early as 1526, one of the first communities of property of the radical Reformation Anabaptist movement was formed in the Nikolsburg area around Balthasar Hubmaier . Jakob Hutter , who came from Tyrol, was able to prevent the threatened dissolution of the Anabaptist community after the execution of Hubmaier in 1528 . The Anabaptists were also called Hutterite Brothers after him. Up to 60,000 Anabaptists lived in Moravia, 12,000 of them in Nikolsburg. Shortly after the Anabaptists and supported by the local nobility, the teaching of Martin Luther also found its way into South Moravia. This led to the church split and the formation of the Evangelical Lutheran Church and denominations of Protestantism. During the Counter-Reformation and the re-Catholicization that was successfully carried out by the Jesuits , a large number of churches were re-consecrated as Catholics. After the persecution in Moravia from 1535 to 1767 by Catholics, Protestants and Turks, a remnant of Anabaptists fled to Russia.

In 1560, the Liechtensteiners sold Nikolsburg as an imperial fief to the rich Hungarian Ladislaus von Kerecsenyi for 60,000 Bohemian thalers . In 1572 Adam Graf Dietrichstein was given the rule of Nikolsburg by Emperor Maximilian II . In 1575 he acquired this as an inherited property, which remained in the ownership of the Princes of Dietrichstein zu Nikolsburg from the Dietrichstein and Mensdorff-Pouilly houses until the 20th century . They had their crypt church on the town square of Nikolsburg, which is now open to the public.

In 1621 Cardinal Dietrichstein made a peace with Gábor Bethlen of Transylvania on behalf of the emperor . In 1625 the Hofrat met under Ferdinand II in Nikolsburg and awarded Albrecht Wallenstein the first generalate and the title of Duke of Friedland. At the same time the last improvement of the city coat of arms of Nikolsburg took place. The former princely Nikolsburg Palace and the Piarist College, which Cardinal Franz von Dietrichstein founded in 1631 as the first Piarist College north of the Alps, also bear witness to the work of the von Dietrichstein family .

On July 26, 1866, Nikolsburg was the scene of the negotiations on the armistice between Austria and Prussia during the Austro-Prussian War, known as the preliminary peace of Nikolsburg .

The Jewish community in Mikulov was in 1421, when the Jews of Duke Albrecht V of displaced Vienna and Lower Austria . The refugees settled under the protection of the Princes of Liechtenstein in the city about 80 km from Vienna , near the Austrian border . Further settlers came to the city after King Ladislaus Postumus had expelled the Jews from the Moravian royal cities in 1454. The community first achieved importance in 1575 when the emperor gave the place Mikulov to Count Adam von Dietrichstein . His son, Cardinal Franz Xaver von Dietrichstein , protected the Jews whose taxes he needed for his work in the Thirty Years War .

In the first half of the 18th century, the Mikulov parish had more than 600 families and was the largest Jewish settlement in Moravia. The census of 1754, ordered by Empress Maria Theresa, showed 620 families, the Jewish population of around 3,000 souls made up half of the inhabitants of Mikulov. Only the smaller part of the Jews of Mikulov could make a living as craftsmen, the rest were engaged in commercial activities. The community suffered badly in the Silesian Wars (1740–1742, 1744–1745, 1756–1763) when they had to pay for their share of the high taxes that the government of Maria Theresa imposed on Moravian Jews.

Many Jews from Mikulov looked for a living in Vienna, where they were allowed to stay for a while with special passports. After the Jews during the March Revolution of 1848 , the establishment was approved, the number of Jewish residents dropped from Mikulov to less than a third. In 1904 only 749 of the city's 8192 inhabitants were Jews.

After the First World War and the break-up of Austria-Hungary, the city, 97% of the inhabitants of which were German-speaking in 1910, was given to Czechoslovakia against the will of the majority of the population. With the Munich Agreement , Nikolsburg became part of the German Reichsgau Sudetenland on October 1, 1938 . Half a year later, the entire southern part of it was incorporated into the Reichsgau Niederdonau , as Lower Austria was called during the Nazi era .

In 1938 Mikulov had about 8,000 inhabitants, 472 of them Jews. Of these, 110 were able to flee abroad. 327 did not survive the Holocaust . The Jewish community in Nikolsburg ceased to exist.

After the end of the Second World War , which claimed 504 victims among the Nikolsburgs, the city returned to Czechoslovakia. Many of the German city residents fled or were arbitrary Czech troops across the nearby border into Austria sold . This resulted in 51 civilian deaths. The Beneš Decree 115/46 (Law on Exemption from Punishment ) declared acts committed "in the struggle to regain freedom ..." or "which aimed at just retaliation for the acts of the occupiers or their accomplices ..." as not unlawful. Between March 15 and October 3, 1946, 2,140 Nikolsburger and a further 20,000 German South Moravians were forcibly evacuated from the camp near Nikolsburg (Oberfeldbaracken, north of the barracks) to West Germany.

Mikulov was a district town until 1960, when it was incorporated into the Břeclav district. 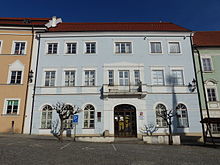 Parish registers were kept since 1625.

Economically, the machine and pottery industry should be mentioned, as well as the oil on the edge of the Vienna basin . Viticulture is also important .

Powder tower on the Gaisberg 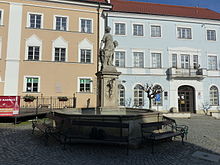 Pomona fountain in front of the town hall

The historic city center was declared an urban monument reserve in 1982 .