The Jihomoravský kraj ( German  South Moravian Region ) is one of the 14 regions of the Czech Republic , as the name suggests, in the south of Moravia . The administrative seat is the historical Moravian capital Brno (Brno). The region (Kraj) includes 672 municipalities, 48 ​​of which are cities. Around 1.17 million people (2017) live in an area of ​​7196.5 km². The population density is 159 inhabitants / km² (30 inhabitants above the Czech average). In addition to the state border with Slovakia and Austria , the Kraj borders the regions of South Bohemia , Pardubice , Olomouc , Zlín and Vysočina . The highest point of the region is the mountain Čupec ( 819  m nm ), the deepest in the district Břeclav (Lundenburg) is the confluence of the Thaya (Dyje) in the March (Morava) at the state border ( 150  m nm ).

The presence of people in South Moravia can be traced back to the Stone Age. The Paleolithic finds in Dolní Věstonice and Pavlov are among the most important in Central Europe. In the Neolithic Age, the Moravian painted ceramic culture appeared here . In the Iron Age, the Amber Road ran through South Moravia. The region was in exchange with the Roman Empire. It was settled by Slavs in the 6th century. The first Slavic ruler known by name, Samo , presumably had his seat of power in the southern March area. The Moravian Empire emerged in the 9th century, the most important town of which in South Moravia was Mikulčice .

In 1182 Moravia, which was ruled by the Bohemian Přemyslids in the meantime , was raised to the status of margraviate. From the 11th to the 13th century , German farmers, artisans and miners were called into the country with a special legal status to develop the almost deserted peripheral areas of South Moravia. The cultivation of the southern part of Moravia (South Moravia) took place mainly through the settlement of the neighboring Bavarian-speaking area.

From 1349 the south Moravian city of Brno was the seat of the Moravian margraves .

As early as 1526, one of the first communities of property of the radical Reformation Anabaptist movement was formed in the Nikolsburg area around Balthasar Hubmaier . Jakob Hutter , who came from Tyrol, was able to prevent the threatened dissolution of the Anabaptist community after the execution of Hubmaier in 1528 . The Anabaptists were also called Hutterite Brothers after him. Up to 60,000 Anabaptists lived in Moravia, 12,000 of them in Nikolsburg. Shortly after the Anabaptists and supported by the local nobility, Martin Luther's teaching also found its way into South Moravia. This led to the church split and the formation of the Evangelical Lutheran Church and denominations of Protestantism. During the Counter-Reformation and the re-Catholicization that was successfully carried out by the Jesuits , a large number of churches were re-consecrated as Catholics. After the persecution in Moravia from 1535 to 1767 by Catholics, Protestants and Turks, a remnant of Anabaptists fled to Russia.

In 1641 Brno replaced Olomouc as the capital of Moravia.

The coexistence of Czechs and Germans was characterized by the fact that the Germans formed the privileged nationality of the Habsburg Monarchy and made up the majority of the nobility, high officials and the upper ranks of officers, while the Czechs first had to laboriously fight for their linguistic, cultural and political rights. While the Czechs demanded in the second half of the 19th century that the dualism of Austria-Hungary should be expanded into trialism and that the Bohemian countries should have their own government in Prague, the Germans in these countries attached great importance to being governed directly from Vienna .

In the second half of the 19th century, South Moravia was the birthplace of two Federal Presidents of the Republic of Austria , Karl Renners and Adolf Schärfs . On both sides of the historic southern border of Moravia, the House of Liechtenstein had extensive estates that were expropriated without compensation in 1945: around Eisgrub in Moravia and around Feldsberg , until 1919 in Lower Austria. Half of the so-called border lock of the Liechtensteiners was in both countries.

When the Danube Monarchy collapsed as a result of their defeat in World War I, the Germans of South Moravia wanted their territories to be annexed to the new state of German Austria in 1918 and relied on the peoples' right to self-determination proclaimed by Woodrow Wilson during World War I. Exiled Czechs, on the other hand, succeeded during the war in establishing the planned Czechoslovak state as an ally of the Triple Entente and in receiving the assurance from the war winners that the historical countries of the Bohemian crown would undivided form the core of their new state. Czech units therefore occupied southern Moravia before the end of 1918. The 1919 peace treaty of Saint-Germain confirmed that all of southern Moravia was part of Czechoslovakia. In addition, the Lower Austrian town of Feldsberg and neighboring villages were assigned to Czechoslovakia for strategic reasons.

As a result of the Munich Agreement imposed on Czechoslovakia , the southern part of the region, which had a German majority, was annexed by the German Reich and was part of the Reichsgau Niederdonau (Lower Austria) from October 15, 1938 to early May 1945 . Geographically, it consisted of the then political districts of Znojmo and Nikolsburg and the judicial districts of Zlabings (political district Daschitz) and Neubistritz (political district Neuhaus ). At the end of the Second World War , at the beginning of May 1945, the Czechoslovak Republic was reestablished, and the border in South Moravia from 1918/19 was re-established. As agreed with the Allies during the war, most of the German South Moravians were disenfranchised, expropriated and expelled in 1945/46 , during which numerous atrocities were committed and many people died of violence, hunger and exhaustion. Their property was given to Czechoslovaks. The assets of the Protestant church were also liquidated by the Beneš decree  131 and the Catholic churches were expropriated after the communist revolution in February .

After 1946, 26 memorials were set up by former home communities along the northern border of Lower Austria to commemorate their expulsion in 1945/46.

When the Soviet occupation troops were about to withdraw from the neighboring areas of Austria , which had been occupied until 1955 and had secured the border up to then, the communist government of Czechoslovakia erected the Iron Curtain on this section of the border as well . Several South Moravian villages that were too close to the border area were relocated.

After the Velvet Revolution of 1989, the Iron Curtain was dismantled. At the end of 2007, the Czech Republic joined the Schengen area . Since then, as until 1918, the border between South Moravia and Austria can be crossed at any point without controls. However, due to Austria's reluctance to act, the historical traffic connections were not fully reactivated until 2010. In addition, there is the fact that many connections across the border that used to exist through family relationships no longer exist after the post-war events and the depopulation of many border towns.

The district has a relatively low level of air pollution. The Brno industrial center is an exception. The Thayatal National Park is also classified as a biosphere reserve . The Moravian Karst nature reserve is the oldest protected landscape area in Moravia.

Map of the region with district boundaries and towns, as well as municipalities with extended powers ( ORP = Obec s rozšířenou působností ORP municipality)

South Moravia is the most important Czech wine-growing region

Agriculture has a long tradition in the area. Grain, sugar beet, wine and fruit are grown on 60% of the area of ​​the region. The gross domestic product is the second highest in the Czech Republic and is around CZK 222,000 per inhabitant. The tertiary sector (59%) has the largest share, followed by manufacturing (37%) and agriculture (4%). In order to consolidate economic development, micro-regions were founded, some with international participation. This includes Euregio Weinviertel-South Moravia-West Slovakia , to which the regions Weinviertel , South Moravia and West Slovakia belong.

The number of employees fell by 1.6% in 2003. One third of the employees work in industry, 12% in education, the same proportion in the service sector. The average monthly wage is CZK 15,198, which is below the national average of CZK 16,917. The highest wages are paid in Brno, the lowest in Okres Znojmo and Hodonín , and the highest in the credit and finance sector by sector. As of March 31, 2017, the unemployment rate was 5.66%.

South Moravia was well developed in terms of transport:

High quality is achieved in healthcare. 23 hospitals, including two university hospitals from Masaryk University , a cancer center and an accident hospital, have 8,096 beds (2005). The density of pharmacies and practicing doctors is also good. Education is also of good quality. In addition to 614 kindergartens, there are 441 elementary schools, 48 ​​vocational schools, 40 grammar schools, 83 specialist grammar schools, 16 institutions of post-secondary education. While the number of pupils in elementary schools has decreased due to demographic conditions, it is increasing in high schools and middle schools, which indicates an increased need for education.

Brno is one of the most important Czech university cities, there are six university institutions here. A fifth of all students in the Czech Republic study here. 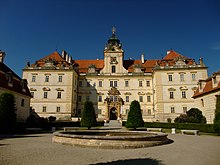 The region consists of four different areas. In the north with many caves and the deepest gorge in the Czech Republic Macocha with a depth of 138 meters, rocky landscapes and a number of protected areas. The south consists largely of fertile, agriculturally used soils, vineyards and large bodies of water with breeding grounds for numerous water bird species . In addition, there is the Pálava biosphere reserve ( Pollau Mountains ) and the Lednice-Valtice cultural landscape (Eisgrub and Feldsberg). Water sports are practiced at the Nové Mlýny dam .

Behind the March (Morava) in the east of the region are the first hills of the White Carpathians . This reserve is one of the most valuable nature reserves in Europe. In the vicinity of Brno there are the forests of the Moravian Karst , in the south the extensive plains of South Moravia and in the vicinity of Brno there is the recreational area Brněnská přehrada (Brno Dam).

The oldest dam in Moravia (1897) is located in Jevišovice in the Znojmo district , as is the oldest mill from the 16th century in Slup . The Asparagus Festival is held annually in Ivančice . The Villa Tugendhat in Brno and Lednice-Valtice in the UNESCO World Heritage List were added.

The two national parks Podyjí on the Czech side and Thayatal on the Austrian side along the Thaya, which is cut deep into the landscape, also offer an attractive landscape . An international Moravskoslezská dálková cyklotrasa (Moravian-Silesian long-distance cycle path), as well as cycle paths, greenways, the Amber Road ( Jantarová stezka ) and Brno – Vienna have also been laid out . You can stay overnight in one of the 536 accommodation establishments, which are used by around one million guests each year, around a third of them foreigners.

Administrative division of the Czech Republic