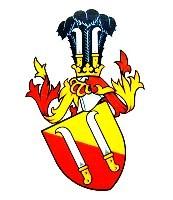 Family coat of arms of those of Dietrichstein

Dietrich Stein (also Dietrichsteiner , Dieterich Stone ) was a widespread, from Carinthia derived Austrian noble family , has been charged in his nikol burg branch in 1624 in the imperial princes and thus the high nobility belonged. It is first mentioned in a document in 1002 and became extinct in the male line in 1864. The Dietrichstein Castle near Feldkirchen in Carinthia is regarded as ancestral castle .

The family later split into two main lines: The Weichselstätt-Rabensteinische , which died out in 1861 with Count Johann Duclas von Dietrichstein, and the Hollenburg-Finkensteinische from which two branches emerged: the older (" Hollenburgsche " or Austrian) branch and the younger ( " nikolsburgische " or royal) branch in 1514 in the imperial baron , 1600 or 1612 in the imperial counts and in 1624 finally imperial Prince of primogeniture was charged. Members of this line had owned the important rule of Nikolsburg (Mikulov) in Moravia since 1575 and were later given further titles: the 3rd Imperial Prince acquired the title of Prince Count of Tarasp in 1684 , the 6th Imperial Prince acquired the title in 1769 as heir of his maternal grandfather of a Count of Proskau , the 7th Prince of the Empire, acquired in 1802 the title of Count of Leslie as heir to the last Count Leslie of Balquhaine. The Nikolsburg or princely branch of the Dietrichstein family ceased to exist in the male line in 1864 with the death of the 10th prince of Dietrichstein.

Four years later, which was Austrian statesman and foreign minister Alexander Graf von Mensdorff-Pouilly , (1813-1871), who was married since 1857 to a daughter of the 9th princes of Dietrichstein by Emperor Franz Joseph under the name Prince of Dietrichstein to Mikulov in the Austrian princes raised (for the primogeniture ), the remaining descendants should bear the name Mensdorff-Pouilly-Dietrichstein . However, this continuation of the Dietrichstein in the female line also expired in 1964 in the male line. However, female descendants of the original royal family can be found in many Austrian and foreign noble families.

Many of the Dietrichstein graves are located in the Schottenkirche (Vienna) ; the burial place of the princes of Dietrichstein zu Nikolsburg is in the crypt church on the town square of Nikolsburg.

Imperial princes from the Dietrichstein family

Austrian princes von Dietrichstein from the House of Mensdorff-Pouilly

Blazon : The family coat of arms of the von Dietrichstein family shows two silver winemaker's knives with gold handles in a shield divided diagonally by gold and red; on the helmet with red and gold covers three black ostrich feathers, covered with the shield image .

Blazon: The coat of arms of the princes of Dietrichstein zu Nikolsburg from the House of Mensdorff-Pouilly shows a quartered shield; Fields 1 and 4 in silver a red armored blue lion (Mensdorff-Pouilly), fields 2 and 3 in field divided by gold and red diagonally to the right, two shiny winegrower's knives with golden handles (Dietrichstein); on the shield of the prince's hat .

Municipal coats of arms in the Czech Republic still show traces of the ancestral coat of arms of Dietrichstein. The city arms of Mikulov show the family arms of the Dietrichstein family, as well as the arms of the municipalities of Kroměříž and Olešenka .