Tarasp Castle is located on a cone-shaped rock hill in the southwest of the municipality of Scuol in the Swiss canton of Graubünden . As one of the most imposing castles in Graubünden, it is a landmark of the Lower Engadine . The castle is visited by around 15,000 people annually.

The castle hill rises above a terrace on the right side of the Inn . At its feet are the hamlets of Sparsels, Fontana, Florins and Sgnè - which formed the municipality of Tarasp until the end of 2014 - as well as Lake Tarasp ( Rhaeto-Romanic Lai da Tarasp ).

The castle has around 100 rooms. In the former weapons hall there is a pneumatic concert organ made by the Dresden organ builder Jehmlich .

Prehistoric grave finds near Sparsels and the so-called witch stones near Sgnè show that the area around the castle hill was inhabited even before the castle was built. Coin finds suggest a Roman observation tower on the castle hill.

The main features of the castle date from around 1040, when Count Ulrich I had the castle built on the 100-meter-high castle hill and cleared the terraces of the right bank of the Inn around the fortress. “Tarasp” perhaps comes from the Latin terra aspera “wasteland” - a reference to the new foundation in the middle of the cleared area. According to tradition, the Tarasper family is said to come from Rome and Milan, properties suggest an origin from the Como area .

The rule of the noble lords of Tarasp extended to goods and rights in Ftan , Scuol , Ardez , Zernez , Sent , Ramosch , Nauders , the Paznaun , Upper Engadine, Vinschgau , Veltlin , Oberhalbstein and Bavaria . For example, the Lords of Ramosch are attested as employers of the Tarasper.

Between 1087 and 1095, Ulrich II, Bishop of Chur from 1089 to 1096 , and his siblings Eberhard, Gebhard and Egino von Tarasp founded a "house monastery" in neighboring Scuol at the foot of the castle. In 1146, the Benedictine monastery under Abbot Adelbert became the Marienberg Abbey by Eberhards and Ulrich's great-nephew Ulrich III. and his wife and Adelbert's sister Uta relocated to Burgeis in Upper Vinschgau . After 1151 Uta von Tarasp also re-activated the neighboring Benedictine convent of St. Johann in Müstair as a nunnery. The Müstair and Marienburg monasteries received donations from Tarasp in the years that followed.

View from the north with planned new buildings (around 1520)

Ownership claims of the Diocese of Chur an der Burg go back to the year 1160: Ulrich III. von Tarasp bequeathed his share to the diocese, Ulrich's nephew Gebhard attacked the castle, presumably supported by the Counts of Tyrol, and had the episcopal occupation killed. Ulrich III, his cousin Egino von Matsch and the Chur bishop then besieged Tarasp Castle and forced Gebhard to hand over the castle. Gebhard had to bequeath his share to the diocese if he died childless, but was allowed to keep the castle as a fiefdom of the bishop.

After the reign of the Tarasper had expired in 1177, Ulrich V entered the Marienberg monastery without children, and the castle and possessions often changed hands: first they went to the diocese of Chur and before 1200 to the Lords of Reichenberg in Vinschgau. In 1239 Swiker von Reichenberg sold to Count Albert III. of Tyrol , which led to various disputes between the Counts of Tyrol, the Bishops of Chur and the Bündner over the castle and thus the supremacy in the Lower Engadine. After 1273, the von Matsch family , close relatives of the founding family, administered the castle, initially as Tyrolean bailiffs, from 1363 to 1464 as fiefdoms, with a brief interruption due to the rule of Frederick VII of Toggenburg (1422–36). The Matscher, the bailiffs in Vinschgau, Münstertal and Greifenstein and, until 1348, in the county of Chiavenna , the Upper Valtellina and the Poschiavo , were also able to assert their property rights in 1421 against the Chur bishop, who was still making claims because of the donation from 1160. They are likely to have given the castle its present-day appearance, more or less.

Inside of the gatehouse around 1904 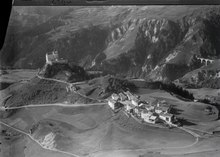 Via Duke Sigismund of Tyrol, who bought the castle for 2000 guilders from the Lords of Matsch, Tarasp came into Habsburg and therefore Austrian possession in 1464 as a county , which led to the feud between the Lower Engadines and Austria. A year later, the Austrian county of Tarasp was confirmed, but the clashes did not end. It is said that preparations were made for sieges in 1548 and 1578. In the course of the 16th century the castle was developed as a border fortress and enlarged to its present size, but Tarasp Castle was stormed and devastated by the people of Graubünden in 1612. The Bündner turmoil 1620–1635 and a lightning strike in 1625 severely affected the castle. In 1648, with the end of the Thirty Years' War , the Free State of the Three Leagues gained its independence from the Holy Roman Empire . While the rest of the Lower Engadine finally bought itself off from Austria four years later, Tarasp remained with the Habsburgs.

The Austrian coat of arms on the castle walls and the inscription "Hie Estereih" still tell of this time of tensions between the Protestant Church of God , which was founded in 1367 by the Diocese of Chur as a counterweight to the Habsburg expansion, and Catholic Austria, which was only established in the 18th century calmed down.

In 1687 Tarasp was given to the princes of Dietrichstein zu Nikolsburg in Moravia as a hereditary imperial fief, but the tax sovereignty remained with the House of Habsburg. In 1714–1716 the princes von Dietrichstein had major renovations carried out. The last maintenance work is recorded from 1722 to 1732.

With the Reichsdeputationshauptschluss 1803 in the course of the reorganization of the Holy Roman Empire, Tarasp fell as the last Austrian enclave in Switzerland to the Helvetic Republic, the fortress lost its strategic importance. The castle was inhabited until around 1815; Plans by the still young canton of Graubünden to set up a prison there were rejected. The canton sold the run-down castle to Landammann Men Marchi from Scuol in 1829 for less than 5000 francs. Via his heirs, the castle came to Gregor Pazeller von Tarasp in 1840, to Caspar de S. Jon from Tarasp in 1855, and National Councilor Andreas Rudolf von Planta- Samedan bought it a year later for 1,100 francs. His son R. U. von Planta sold it in 1900 for 20,000 francs to the Dresden industrialist and patron Karl August Lingner , who got to know it during a spa stay in Tarasp-Vulpera. From 1907 to 1916 he had the construction, supervised and organized by the art historian Kuno Ferdinand Graf von Hardenberg , renovated by the castle expert Johann Rudolf Rahn in the style of historicism , a concert organ installed in the armory and a park built on the castle hill.

With his death on June 5, 1916, Lingner bequeathed the castle to King Friedrich August III. von Sachsen, who turned down the inheritance because, according to the will, he should have lived in the castle for a certain amount of time each year. The castle then went to the Grand Duke Ernst Ludwig of Hesse-Darmstadt and the Rhine . In 1919, after the proclamation of the republic, it was agreed between the now people's state of Hesse and the resigned Grand Duke that the Tarasp Castle should become the private property of Ernst Ludwig as a box . After the death of Ernst Ludwig, the castle passed to his son Ludwig of Hesse and the Rhine . His marriage to Margaret Princess of Hesse and near Rhine remained childless, so that after her death the castle fell to the heirs of the Hessen-Kassel family and remained in their possession until 2016.

The von Hessen-Kassel family signed a four-year sales agreement with the then community of Tarasp in 2008 and extended by two years in 2012, which was supposed to raise 15 million francs for the acquisition of the castle by a foundation. The “Pro Chastè Tarasp” foundation, founded on November 1, 2010, had the task of maintaining the castle together with the community, transforming it into a training and conference center, modernizing it in a moderate way and making it accessible to a wider public. After the corresponding efforts failed, the castle was transferred to the Lower Engadine artist Not Vital on March 30, 2016 for 7.9 million francs . Vital, who wants to upgrade the castle in terms of cultural tourism, is to receive an annual subsidy of CHF 200,000 to cover operating costs from the municipality of Scuol until 2030. Later the castle is to be transferred to a foundation.

Public tours have been offered in the castle since 1919.

Castles and castle ruins in the Engadine