The title of this article is ambiguous. Further meanings are listed under Burgeis (disambiguation) .

Burgeis ( Italian : Burgusio ; Rhaeto-Romanic Barbusch ? / I ) is a fraction of the municipality of Mals in South Tyrol with 852 inhabitants. (January 2014) The village is located at 1216  m slm altitude on the Malser Haide in Vinschgau or Vinschger Oberland , the highest section of the Adige Valley . Burgeis is located on the western side of the valley at the foot of the Watles ( 2557  m ) on the upper reaches of the Adige . The name probably goes back to a Roman fortification that was built to protect the " Via Claudia Augusta " that ran through the village. The name of the noble free von Burgus-Wanga, whose coat of arms the village bears today, is derived from this fortification. The place is 2.5 kilometers from the village of Mals . Burgeis maintains partnerships with Lohr am Main , Beilngries and Weingarten .

Burgeis was first mentioned in 1160 as "Burgusia". The place is particularly rich in house facades painted with frescoes , old portals , open stairs and bay windows . The St. Michael Fountain in the center of the village is well worth seeing. Located near the town of Prince Castle was in the 13th century as the seat of the prince bishops of Chur built. The Fürstenburg is now home to the agricultural college.

The oldest reports about Burgeis can be found in the chronicle of the Benedictine Father Goswin , who lived from approx. 1320 to 1395 and handed down the possessions, but also the history of Marienberg and thus of the high medieval Upper Venosta Valley, in an extensive outline. He gives us information about the castle from the 12th century, which consisted of several scattered courtyards, which were taxable both to the monasteries of Marienberg and Müstair as well as to the bishop of Chur, to whose jurisdiction the Vinschgau belonged. At that time there is also said to have been a monastery (presumably at the place where the Kreuzkapelle stands today), dedicated to St. Zeno was consecrated. Goswin also reports of a tower, called "burgus" or "castellin", which is said to have stood between the prince's castle and the monastery and to which the name of the village refers. As evidence for this claim, Goswin states that excavations at this point revealed the bones of large people.

In Roman times, a burgus was a fortified house that resembled a tower. The bones found in particular can also point to an important site of prehistoric peoples. Linguistically, a name after the Celtic goddess Bergusia would be easy to imagine.

Above Burgeis is Europe's highest Benedictine monastery, Marienberg (1340 m), founded by the nobles of Tarasp ( Engadin ). Its impressive baroque church and the Romanesque crypt (consecrated in 1160) are among the most beautiful art monuments in Vinschgau. The frescoes in the crypt from the time between 1175 and 1180 were partially discovered in 1887 and completely exposed in 1980 after the demolition of baroque crypt installations. The excellent quality and the good state of preservation of the Romanesque murals attract worldwide attention. Burgeis is the birthplace of the well-known baroque painter Johann Evangelist Holzer , he attended school in the Marienberg monastery.

The little church of St. Stefan , located not far from Marienberg Monastery , which, due to archaeological excavations , can be traced back to the early days of Christianity in the 5th century, was probably given its current shape in the 9th / 10th. Century, which is indicated in particular by the round arches, the rectangular choir and the triumphal arch. The nave wall is 1.50 m thick. On the back wall of the choir, partly covered by the altar, wall paintings from 1498 (Coronation of the Virgin Mary, Saints Stefanus and Laurentius), tendril decoration in the window reveal. Altarmensa from 1677; Gable sculptures and side statues (around 1500) deposited in Marienberg Abbey (risk of theft).

Above the monastery (2222 m) lies the romantic Pfaffensee, named after the Benedictines . It is easy to reach from the Plantapatschhütte in about 30 minutes. 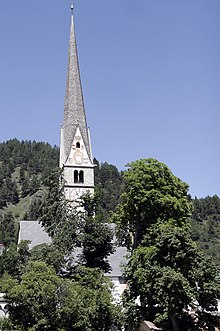 Church of the Conception

The Baroque organ, originally built by Carlo Prati from 1677 to 1678 for the collegiate church of the Marienberg Monastery, is located in the parish church of the Mariä Konzeption in the center of Burgeis . After the abolition of the monastery in 1807, the Prati organ was auctioned by the Burgeis community and installed in the parish church. In 1874 Joseph Aigner renewed them using Pratis prospect pipes and the richly decorated case, which bears the year 1678 and the coat of arms of the monastery and Abbot Franz von Pasch.

On the Malser Haide northeast of the village there is an ossuary as a memorial , which was built in 1939 under fascism . The memorial is controversial because of its symbolic content, especially since none of the soldiers of the First World War buried there died on site.

The bones that were transferred here came from various military cemeteries, some of them far away. Although the memorial is dedicated to the memory of the fallen Italian soldiers, it also contains the remains of soldiers of the Austro-Hungarian armed forces. Therefore were in 2011 at the ossuary , the popularly Boanerturm , explanatory panels is called appropriate.

Numerous hotels, guest houses and inns in and around Burgeis form the basis for flourishing tourism today , especially in winter. Four larger companies are also located in the craft zone of Burgeis: a traditional door manufacturer, a large bakery, a manufacturer of low-energy houses and the Burgeis dairy, which produces the original Stelvio cheese PDO .

There are several clubs in Burgeis. The oldest of these is the music band, which was founded in 1818. Friendships connect the Burgeis band with the city of Lohr am Main, the city of Weingarten in Württemberg, the Patsch am Patscherkofel band and the Diessen band at Ammersee . 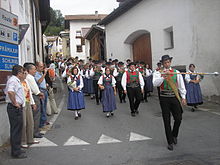 Sons and daughters of Burgeis:

Other personalities associated with Burgeis: