The title of this article is ambiguous. For the German music producer see Manuel Schleis . 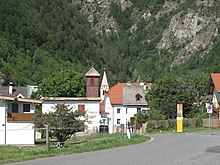 View of the village of Schleis

The tower of the parish church of St. Laurentius

Schleis ( Italian Clusio , Romansh Schlü ? / I ) is a fraction of the municipality of Mals in South Tyrol ( Italy ). The village has 359 inhabitants (January 2012) . Schleis, 1064  m high, is located on the Malser Haide in the Vinschgau or Vinschger Oberland . The village through which the Adige flows is located on the western side of the Adige Valley at the exit of the Schlinig Valley . The parish church is dedicated to St. Lawrence of Rome . It was created through the renovation and re-consecration (1693) of the existing, presumably late Romanesque Laurentius Chapel. The late Romanesque facade tower has coupled arched windows with round columns; fall inside u. a. the baroque altar (1693), which fills the entire east wall, the baptismal font made of white marble (16th century) and a marble holy water stone (17th century).

Famous is the Schleiser Kirchtag , (popularly: Lorenzitag), which takes place annually on August 10th, the name day of St. Laurentius (Lorenz) takes place. Also worth seeing is the Schleiser "Krampus Tog" which is celebrated every year on December 5th, traditionally with the typical "Stock Lorfn" in the village.

In Schleis there is a kindergarten, a primary school and the Schleis volunteer fire department .

The local sports club SC Arunda Schleis has been relatively successful in natural tobogganing for youngsters on a national and international level.