Mals ( Italian Malles ) is a village in Vinschgau and a fraction of the South Tyrolean community of Mals . Mals is the largest town and seat of the municipality and has 2119 inhabitants (as of January 2020).

Mals is located at the southern end of the Malser Haide in the Vinschgau or Vinschger Oberland . The village is located on the orographic left side of the Adige Valley and is traversed by the Puni . In the north-east, the village is dominated by the slopes of the Sonnenberg , which culminate on the Spitzigen Lun .

It is certain that the Romans also stayed in Mals. Two tombstones in the Ferdinandeum in Innsbruck commemorate this. During archaeological excavations at Paulihof in 2012, the remains of a villa rustica and the remains of a Roman road were found.

In the 12th century, Mals was the place of jurisdiction for the Churian people of God and perhaps also for the Tyrolean people. At the beginning of the 15th century, the jurisdiction was transferred to Glurns .

The Tyrolean princess Claudia de 'Medici awarded the town of Mals the coat of arms and market rights for two annual markets on January 13th, 1642 : the Georgimarkt (April 23rd) and the “ Gollimarkt ” (October 16th). Today's coat of arms of the municipality of Mals takes on motifs of the houses of Habsburg and de 'Medici with a red, white and red shield and three red spheres forming a triangle on a golden background .

In 1499 Mals was plundered and cremated by the Engadines who stormed towards the Calven . The village suffered the same fate from the French in 1799 after the second battle of the Calves. 108 houses and barns as well as the parish church Maria Himmelfahrt fell victim to the big fire.

In 1813 the still existing band was founded, in 1879 that of the local volunteer fire brigade. In 1906, with the opening of the Vinschgau Railway with the Mals train station , the town was connected to the railway network.

Numerous high schools make Mals the school center of the Upper Venosta Valley. In 1994, at the instigation of the school director at the time, Max Bliem, the sports school "Claudia von Medici" entered the first year of school. Successful winter sports athletes have emerged from this school, such as B. Christof Innerhofer , Manfred Mölgg , Patrik Staudacher and Dominik Paris .

Today, Mals is also a center of administration and purchasing on a small regional level.

Parish church "Maria Himmelfahrt" and Fröhlichsturm and Johannesturm in Mals

The place Mals was formerly called the "seven-towered" or "seven churches" because of its church towers; of the former seven churches there are now five, namely the parish church, the St. Benedict church, the Martinskirche, the Michaelskirche and the church of the fourteen helpers in need.

Only the tower of the former Johannskirche stands. The Church of St. Nicholas and the Church of St. James no longer exist. The seven residences, most of which are still inhabited today, also date from the Middle Ages. The names of these residences are Fröhlichsturm, Drosturm, Preschgenegg, Lichtenegg, Malsegg, Goldegg (also called Albersheim) and Pracassan.

First mentioned in an agreement from 1292 by Goswin (Actum fuit in Malles in ecclesia sancte Marie). There is also a letter of indulgence from 1297, issued by 10 bishops in Rome. In the middle to the end of the 15th century the church was rebuilt, presumably it was enlarged or at least renovated. Because in 1479 the church was consecrated by a bishop Johannes. In addition to the Mother of God, the high altar is now also consecrated to the Chur diocese saints Lucius, Florinus and Anna, as well as to St. Laurentius. In addition, two side altars, a middle altar and the cemetery were inaugurated. As a result of the reconstruction, the parish church was definitely gothic. Remains of the late medieval building have been preserved in the choir to this day. There is still no talk of a church tower; it can be assumed, however, that the Romanesque parish church had a tower that looked similar to those of the old churches in Mals.

The parish church Maria Himmelfahrt today has a Gothic steeple. The tower was built around 1530 and provided with a harmonious bell.

Of the churches, St. Benedict is the most important, as it has the oldest, partly well-preserved Carolingian frescoes from the 9th century. Spiritual and secular donors are shown. It has a rectangular hall shape. The building is in an unfavorable position, as it was often overburdened, which meant that the church was always damp. Some historians assume it could be on a Raetian spring shrine. It is believed that the church was built in the 8th century. Originally it did not have a church tower, a Romanesque tower was probably only added in the 12th century. In front of the west wall is a boulder with Roman carriage tracks.

The church of St. Martin dates back to the 12th century and received a Gothic choir in the 16th century. St. Martin is always closed, only a few services are still celebrated in this church. 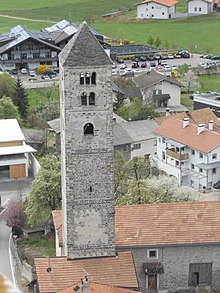 Of the St. Johann church, which was destroyed by the French in 1799, only the Romanesque tower and remains of the church facade stand on the side of the Puni. The nave was converted into a residential building. The tower is considered to be the most beautiful of the three Romanesque towers in Mals.

St. Michael am Friedhof is a graceful late Gothic church (16th century) whose Romanesque predecessor probably fell victim to the fire of 1499. The year "1504" on the east side of the church speaks for it. At the cemetery there are also two works by the contemporary painter Karl Plattner . One is the depiction on the war memorial, the other is on the family grave of the Plattner family, where the artist is also buried.

The Capuchin Hospice was founded at the end of the 17th century and the Capuchin Church was consecrated in 1699. The monastery was closed in the 1990s and the St. Martin's home for the elderly was built in its place. The church still stands and is accessible both from the outside and directly from the home. Church services take place regularly.

The Church of the 14 Holy Helpers dates from the first half of the 18th century. Inside the rotunda there is a dainty baroque altar and the oil paintings of the 14 helpers in need.

Tower of the Fröhlichburg ruin

The keep of the Fröhlichsburg is 33 m high and has a circumference of 33.5 m. The Fröhlichsburg was often depicted as a Roman building because of the keep (also called "Bergfrit") and because of the Roman inscriptions that were found near the tower. The scholar Anton Roschmann declared as early as 1736 that this is not the case . The keep was also a court seat. The castle complex was built in the 12th and 13th centuries by the Lords of Mals (Matsch) , first mentioned in 1149 . The von Fröhlich family owned the castle from the end of the 16th century, and their name is testament to this. Ashlars of the castle complex, which has meanwhile deteriorated into ruin, were removed at the beginning of the 19th century and used to enlarge the parish church. In 2004 the Fröhlichsturm was renovated in an exemplary manner through an initiative by Johannes Fragner-Unterpertinger ( Friends of the Fröhlichsturm ) and made accessible to the general public. Today the castle ruins are privately owned.

The patrician house was freed in 1593 for the captain and caretaker of Tarasp, Hans Mohr, with the name Lichtenegg and was already owned by the family from the Engadin. In 1690 it was sold by Veit Mohr to Captain Veit Hofer. Around 1825 the barons von Federspiel appear to be the owners (marble relief of St. Florian above the portal, donated by Elisabeth Baroness von Federspiel in memory of the Mals fire of 1799, in which the house was spared). The first pharmacy in Mals, in the Lichtenegg residence, was also mentioned during this period. At the end of the 19th century the property was sold to the merchant Wilhelm Flora. A marble coat of arms of Flora is above the portal. 1931–33 the facade was adorned with heraldic paintings by Cassian Dapoz . Today the residence is a private residential and commercial building.

The Drosturm was probably built in the 12th or 13th century. From the beginning it was mentioned as the Tower of Mals in the possession of the Bailiffs von Matsch. After the Matschern, the Counts von Trapp appear as owners, who then sold the castle to their Mals servant named Verdroß. It is from these that the current name Drosturm comes from. After several changes of ownership, from Marienberg Abbey to Messrs. Söll von Aichberg, the Drosturm came to the Mals businessman Ignaz Flora around the middle of the 19th century.

The Goldegg or Albersheim residence is the only one of the seven residences in Mals that is not privately owned. However, the house changed hands frequently.