Glurns ( Italian : Glorenza ; Rhaeto-Romanic Gluorn ? / I ) is one of the smallest towns in the Alps with 905 inhabitants (as of December 31, 2019) . It is located in the Vinschgau in South Tyrol on the Upper Adige . A special feature of the city are its completely preserved city ​​walls . These separate the city into what is known as an inner and an outer city. Glurns is one of the eight cities in South Tyrol and the only city in the Vinschgau.

View of Glurns from St. Martin

Glurns is located in the Vinschgau in the west of South Tyrol. The city center ( 907  m ) lies in the broad valley floor of the Etsch Valley at the lower end of the Malser Haide , between the Etsch and Puni and near the confluence of the Rambach and the Etsch. In the southwest, the municipal area at Glurnser Köpfl ( 2395  m ) and Plaschweller ( 2534  m ) in the Fallaschkamm reaches the northernmost foothills of the Ortler Alps , which are protected in the Stilfserjoch National Park . 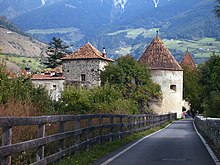 Towers of the city wall

Glurns was already a traffic junction in Roman times. The Via Claudia Augusta ran here, as did a trade route to nearby Switzerland.

The first settlement, the village of Glurns, was in the western part of today's city between the Adige Bridge and the Malser Tor. The first written mention "in vico Glurnis" dates from 1163. The name goes back to a Latin colurnus and means hazel bush . The Italian name Glorenza, on the other hand, was first coined in the times of Italian fascism (see Prontuario dei nomi locali dell'Alto Adige ).

In 1227 Glurns received its own parish. While the village of Glurns was subordinate to the Bishop of Chur , the Tyrolean sovereigns promoted a neighboring settlement (around today's Laubengasse, see illustration), which was called "burgum" (fortified place) as early as 1294. In 1291 Meinhard II granted Glurns market rights, and in 1294 he moved the Bartholomäusmarkt from Münster to Glurns. Glurns was first mentioned in writing as a city around 1304. Due to its favorable location on the border between Tyrol and Switzerland, it quickly became very rich and known for its market. The sovereigns promoted the settlement through ten-year tax exemptions and the city benefited from road tolls and deposit fees (the right of deposit required traveling merchants to repack and offer their goods). Most of the trade was in salt that came from the salt pans of Hall in Tirol , but also with tropical fruits from Northern Italy, wine, iron and metal goods and spices. 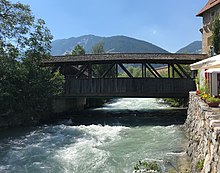 Bridge over the Adige

In 1233 Glurns became the seat of a sovereign court, which was responsible for the entire upper Vinschgau .

In 1423 Glurns was named seventh among 18 Tyrolean cities. On May 22nd, 1499 near Glurns in the battle of the Calven a superior imperial army was defeated by an army of the three leagues after an evasion maneuver. The victorious troops then plundered the city, set it on fire and committed atrocities against the civilian population. In the course of the reconstruction, the city fortifications that still exist today were built around both parts of the city according to plans by the court painter and fortress master builder Jörg Kölderer . In 1528 the future Emperor Ferdinand I gave the city the city arms. The fortifications were completed by around 1580.

It was around this time that the city began to decline economically. The trade routes have changed, especially since the Eisack valley near Bozen was made passable. The old trade relations dried up. In addition, at the beginning of the 17th century, the development of the war system made the new town fortifications obsolete and considered worthless. During the Thirty Years' War , the city was ravaged by roaming mercenaries. It is believed that these also brought in the Hungarian typhus, which was rampant in 1635 .

The Tauferer Tor in the west of the city. In the background the church of St. Pankratius 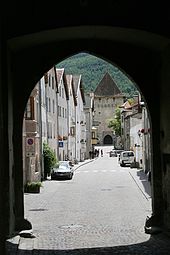 View through the Malser Tor to the Tauferer Tor in Glurns

The church of St. Pankratius at the Tauferer Tor

Glurns burned down several times and was rebuilt, around 1664 and devastatingly on January 5, 1732, when 89 houses and barns with cattle burned down. There were five fatalities. The city was also repeatedly a victim of floods from the Adige .

In the 19th century, rural economic structures predominated in the former trading town. Through inheritance divisions in the form of real division , plots of land were created that were too small to guarantee the survival of the owners. Quite a few residents had to seek their livelihood as carts, i. H. as traveling traders who carried their goods (tropical fruits, chestnuts from the south, household appliances from the north) on a cart. As early as the second half of the 17th century, countless Swabian children migrated to Germany and Switzerland at the end of February or beginning of March in order to work there for new clothes and low wages; only the First World War put an end to this.

On June 16, 1855, a flood from Lake Haider in Upper Vinschgau devastated the city. The Vinschgau Railway, which opened in 1906, did not touch Glurns directly either, but ended in the neighboring Mall and thus did not bring any direct economic impetus either. When Glurns and South Tyrol fell to Italy after the First World War , nothing changed in the economic situation. As a result of the lost importance, the court was moved to Schlanders in 1931 .

It was not until the 1970s that extensive renovation and revitalization of the city began with the participation of several universities and colleges, which can now use the advantages of the intact, picturesque cityscape as a tourist attraction.

A few meters outside the city walls, south of the Adige, is the Catholic Church of St. Pankratius. The late Gothic building has a baroque onion dome. The church was built around 1481 on the site of an older church from the 13th century. A fresco dated 1496 shows a motif of the Last Judgment. In 1965 the interior, originally furnished in a late Gothic style, was restored. From around 1495, a fresco by Anna Selbdritt has been preserved next to the side altar . A Pietà group, dated around 1440, is set up on the left side altar hall on feast days. The stained glass windows of the choir (around 1893) depict the birth, resurrection and crucifixion of Christ. A sandstone relief in the choir room indicates Jörg von Lichtenstein, the church's founder. 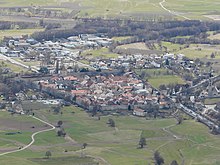 Glurns lies at the junction of several important Alpine passes. The city lies between the Reschenpass , which connects with North Tyrol , the Ofenpass into the Swiss Engadine and the Stilfser Joch into Lombardy . The city is about one kilometer from the Mals train station of the Vinschgau Railway . Glurns now has a connection to the railway network again.

Glurns is on the long-distance cycle path , which runs as the Via Claudia Augusta along an ancient Roman road of the same name .

For better marketing, Glurns is a member of the association I borghi più belli d'Italia (The most beautiful places in Italy).

Cities of the Autonomous Province of Bolzano - South Tyrol

Municipalities of the district community Vinschgau