The hazel ( Corylus ) are a genus of flowering plants in the family of the birch family (Betulaceae).

Hazel species are deciduous, deciduous mostly single-stemmed trees or shrubs that reach heights of 3 to 15 meters. The bushes usually branch out into a large number of branches without forming a main trunk, the trunks and branches are twisting. The grayish brown, thin and smooth bark shows no noticeable cork pores, it is closed and breaks into vertical stripes and scales with age. The wood is almost white to light brown, finely textured, medium-hard and heavy. Branches, twigs and twigs are standing or distributed in two rows. The young twigs differ in long and short shoots. Before winter, the plants form sessile, broad, egg-shaped buds that are pointed at the top and have several smooth, roof-tile-like overlapping scales.

The leaves stand in two rows on both the long and short shoots. The leaf blade is broadly ovate, the base is often heart-shaped, the tip occasionally almost lobed, the edges are double-serrated. The 4 to 12 cm long and 3.5 to 12 cm wide blade is traversed by eight or fewer pairs of lateral veins, it is thin, the underside is usually finely haired and occasionally glandular.

The hazel species are single sexed ( monoecious ). The male inflorescences ( catkins ) are on the branches of the short shoots in many grape-like groups. They are already formed in the previous year and survive the winter naked in order to knock out before the leaves. Within the male catkins, the flowers stand in threes, surrounded by a scale-like bract. They contain four stamens , which are divided almost up to half, thus forming eight half stamens. The stamens are very short and fused with the two preceding leaves on the bract.

Above the male catkins are the female inflorescences as smaller groups of flowers and bracts , two female flowers are held by a bract. The female flowers bloom at the same time as the male flowers, they are reduced and only the stylus emerges from the bud to bloom.

Pollen from hazel species is often the cause of allergic rhinitis in late winter and the first few months of spring. The pollen grains can be easily recognized by a palynological examination by the typical and less often tetraporate structure of their granular exine .

The fruit heads are dense groups that consist of several fruits. Each fruit is surrounded by a calyx formed from two bracts. The bracts are leaf-like, hairy or prickly, enlarged and occasionally fused to form a short to elongated tube. The nuts are relatively thin-walled, almost spherical to egg-shaped, they are somewhat indented on the sides and ribbed lengthways.

The species of the genus are distributed in the temperate areas of the northern hemisphere, from North America through Europe to Asia.

Hazelnuts are home to 44 species of caterpillars .

The genus Corylus belongs to the subfamily of the hazelnut family (Coryloideae) within the birch family (Betulaceae). Phylogenetic studies place the genus as a sister clade to the remaining three genera of the subfamily.

According to the cladogram 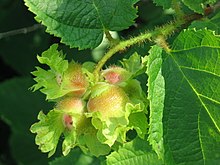 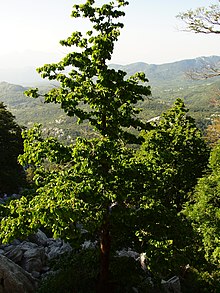 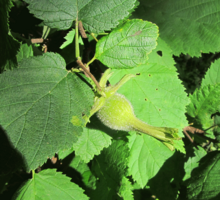 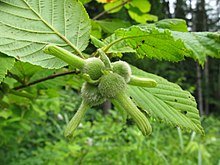 Depending on the author, the genus Corylus contains 10 to 25 species:

Depending on the author's opinion, the species Corylus maxima Mill. ( Lambertshasel ), Corylus pontica K. Koch and Corylus colchica Albov are often split off from Corylus avellana . In addition, depending on the author, the species Corylus californica (A. DC.) A. Heller is counted as a variety of Corylus cornuta . Likewise, the varieties often assigned to Corylus heterophylla are var. Sutchuenensis Franch. and var. yunnanensis Franch. listed as separate species by some authors. Corylus papyracea also has controversial rank .

The first fossil record of hazelnuts using nuts surrounded by multi-lobed, deciduous and prickly bracts comes from the mid Eocene and was found near Republic in the US state of Washington . Fossil leaves that resemble those of the Corylus species are known from the northern hemisphere from many finds from the Paleocene and the Eocene. An exact assignment to the genus Corylus or Palaeocarpinus is not possible.