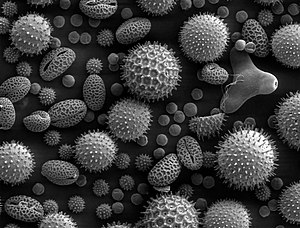 Palynology is the scientific name for pollen analysis . Etymologically it is the "doctrine of the scattered dust", here the pollen , scientifically " pollen ". Palynology examines both recent and fossil palynomorphs (pollen, spores and other microfossils, including the dinoflagellates ).

Palynology is an interdisciplinary science, as it affects both the geosciences (including geology ) and biology, especially botany ( paleobotany and archaeobotany ). In recent years it has also become more and more important in the field of climate research . Stratigraphic palynology, or pollen stratigraphy, is a sub-area of paleontology , specifically micropaleontology , which studies palynomorphs from the Precambrian to the Holocene .

Due to their worldwide distribution and high production, palynomorphs can be used in geology / paleontology on the one hand as reference fossils and thus enable a temporal classification (see also: stratigraphy ) of sediments and rocks, on the other hand - because of the dependence (of the vegetation ) on certain location factors - but also serve as facies fossils and thus allow an ecological interpretation of the deposit environment (facies interpretation).

The Swedish geologist Lennart von Post is considered to be the father of this method with his diagrams first published in 1916. Just 3 years later, the method was also used in the Federseeried by Carl Albert Weber , the old master of German peatland research . He described his results in an unpublished manuscript in 1920. Of particular importance was his finding of a Neolithic warm and dry period with rapid silting up of the lake, which made a settlement of the basin possible in the first place.

At the end of the 1920s, Karl Bertsch began a palaeobotanical , mainly pollen analysis and moor stratigraphic study of the Federsee Basin published in 1931 . Even if the results were only rough, they provided a first clue for the settlement and its chronological sequence over 4000 years. From 1935, researchers such as Franz Firbas and I. Müller refined the method in the Federsee area.

The term palynology was introduced in 1944 by HA Hyde and DA Williams, after correspondence with the Swedish geologist Ernst Valdemar Antevs , in Pollen Analysis Circular (one of the first journals on pollen analysis , published by Paul Sears in North America). Hyde and Williams decided on the word palynology based on the Greek words palynein ' to spread' and pale 'dust' (similar to the Latin word pollen).

By analyzing the pollen found in sediments and peat layers , the history of the climate and the flora of the site can be reconstructed, especially in the case of the finds of bog bodies . If a complete timeline through the sediments has been established for an area, archaeological finds in identified layers can be dated relatively precisely.

In the case of honey varieties , pollen analysis is used to check the declaration and the origin of the samples. This science is called melissa palynology.

So z. For example, the dating of documents can also be checked for seasonal plausibility using pollen that has sunk into the ink - and is thus preserved.

In climate research and in paleoecology

In climate research , a pollen analysis, similar to the analysis of an ice core , can reveal indications of climatic changes at the examination site. This enables climatic changes to be recorded and described.

Quantitative pollen studies have been carried out since the beginning of the 20th century and presented in the form of pollen diagrams. The Y-axis indicates the age of the sediments; the relative frequency of the different pollen grains is shown on the x-axis. A problem for the informative value of the pollen diagrams is that the different dispersal abilities of the individual plant species lead to an under- or over-presentation of the associated pollen. For example, if the pollen grains of a species are only marginally represented, this may be due to the rare or remote occurrence of this species, but also to the distribution mechanisms of the pollen. For example, wind pollination can cause over-pollination and animal pollination an under-representation of the pollen frequency in the sediments. The tertiary and quaternary palaeoclimate was reconstructed through comparisons with today's plant communities and their locations as well as knowledge of the location factors of individual species. In addition, the pollen diagrams was shown using that in Central Europe after the last Ice Age , first birches and pines , later oaks and beech trees dominated. Pollen zones became their own stratigraphic classification system.

Because of the great resistance of the palynomorphs to time, pressure and heat, they can be determined even after a very long time and despite dynamic and thermal stress (see also: Diagenesis and tectonics ) - for example in the drilling profiles of the Ruhr area, including their coal seams . The determination enables, in connection with sedimentological and (carbon) petrographic factors ( sedimentology and petrography ), a reconstruction of the paleoecology , e.g. B. the Moors of the Carboniferous . The necessary preparation of the cuttings takes place in many tedious steps. First the samples are carefully crushed. Then, depending on its properties, the material obtained is prepared in acids and / or alkalis or boiled. In between there are repeated sieving processes, and also z. Sometimes a repeated neutralization is necessary. Finally, the material to be sieved is placed in a centrifuge in order to ultimately determine and count the palynomorphs in a preparation under the microscope.