Neumarkt ( Italian : Egna ) is a market town in the South Tyrolean lowlands in Italy and acts as a seat of the district community Oltradige-Unterland . The main town of the same name is not far from the left bank of the Adige .

Neumarkt was founded in the autumn of 1189 by Bishop Konrad von Trient as the new market of Enn . The wealth that could be acquired through year-round trade is still reflected today in the village center, the appearance of which probably goes back mainly to the 16th century. The community has 5463 inhabitants (December 31, 2019), only 820 hectares may be permanently settled, while the majority of the remaining area belongs to the Trudner Horn Nature Park and is therefore under nature protection.

Neumarkt is located in the Unterland , a wide section of the Adige Valley that runs through the southern Alps . Neighboring communities are Salurn in the south, Montan in the east, Kaltern in the north and Tramin , Kurtatsch , Margreid and Kurtinig in the west. The closest major cities are the South Tyrolean provincial capital Bozen and Innsbruck 25 and 140 kilometers to the north, and Trento and Verona 34 and 135 kilometers to the south.

Neumarkt from the northeast

The municipal area of ​​Neumarkt extends over an area of ​​23.67 km². In the area of ​​the valley floor , with a few exceptions, it largely remains on the orographic left (eastern) bank of the Adige . In the north, the municipality ends at the foot of the hill of Castelfeder , in the south it extends to about the height of Kurtinig on the right bank of the Etsch. In the east, the municipality of Neumarkt occupies significant areas of the wooded mountain area of ​​the Fiemme Valley Alps , which flank the lowlands. The most important elevations here are the Königswiese ( 1622  m ) and south of it - separated from each other by the Aaltal - the Madruttberg ( 1507  m ).

The village settlements of the municipality exist alongside the main town of Neumarkt yet from the fractions Vill , Mazon , Laag and St. Florian . The main town (210- 260  m slm ) is located on and around the alluvial fan of the east the valley floor Unterlandler reach Trudner Bach . Immediately afterwards in the far north of the municipality is the Vill (220- 260  m ) which propagates on the right side of the Trudner Bach from the valley floor to the foot of the slope up. Directly above the main town - on one of viticulture dominated and northwest offshore of Königswiese hillside terrace - the courts of Mazon are (360- 460  m scattered). Clearly separated from the community center - about halfway Salurn direction - are in the south in quick succession one after the other St. Florian (210- 240  m ) and Laag (210- 220  m ). In addition, there are still some houses in the mountain village of Gfrill, which otherwise belongs to Salurn, on a mountain saddle that is more than 1300  m high, southeast of the Königswiese to Neumarkt. The municipal parts to the right of the Etsch in the direction of Tramin include an industrial park where, among other things, the headquarters of Würth Italia are located. 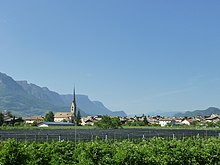 View of the main town from the south

While the settlement area of ​​the municipality in the Adige Valley occupies only a relatively narrow strip, the landscape of Neumarkt is shaped by the Madruttberg and the Königswiese . Both are under protection in the Trudner Horn Nature Park , in which Neumarkt has a share of 1,412 hectares, which corresponds to almost 60% of the total municipal area. Geologically, the light dolomite limestone predominates in these two mountains , while the brownish red quartz porphyry prevails in the eastern part of the municipality towards the Weissensee . Dry grass , scrub, pine and mixed forests grow on the predominantly calcareous soils of the Neumarkt municipality .

In the wilderness, wood mice and badger find favorable possibilities for building their burrows in rocky terrain, while in the dry pine forests the pines are populated by wood ants . In these sub-Mediterranean scrub forests, the green lizard also survives , as it finds some of its favorite prey in the singing cicadas and praying mantises . On the north-west slopes of the Königswiese, where the forest is dominated by beech and fir trees , larger hoofed game, especially wild boar and deer , can occasionally be seen. Numerous birds build their nests in the branches of this mixed forest, with tits , nuthatches , woodpeckers and owls breeding in tree hollows. The common raven and the mountain hare can also be found in the high altitudes above 1000  m .

A large number of mountain streams supply the Neumarkt community with plenty of water before they flow into the Etsch at the bottom of the valley. The most important water supplier among them is the 10 km long Trudner Bach, whose catchment area covers about 28 km² and is dominated by sedimentary rock. In 2010 the creek was examined three times for its drinking water quality , whereby the results were very good all year round and corresponded to a first class of biological water quality according to macrozoobenthos . With an average number of 30 different taxa and a biotic index of 12.5, the Trudner Bach achieved the best result of all the brooks sampled in South Tyrol, which is probably due to the relatively natural morphology of the brook bed. A somewhat weaker result of the second quality class, however, provided the examination of the diatoms , which indicates that a certain amount of nutrients gets into the stream and affects it.

The climate in Neumarkt is temperate with a mild Mediterranean character in flora and fauna. The annual average temperature is around 12.5 ° C (for comparison: Berlin around 10 ° C), with the coldest month being January, the driest being February, the rainiest being June and the hottest being July. The winds, which mainly follow the direction of the valley, are generally weak to moderate, but can sometimes blow very violently in summer as a harbinger of thunderstorms. Seen over the whole year, however, precipitation is rather rare; instead, with up to 300 in number, the sunny days clearly dominate. Due to the mostly cloudless sky, the winters are sunny and dry during the day, but usually icy cold at night with temperatures well below freezing point. Since the municipality itself does not have its own weather station, the data from the Auer weather station is still used today for a general description of the climate.

As early as 1181, a meadow on the Etsch in Enn was mentioned, on which wooden rafts were assembled for transport on the river. The place was founded as burgum novum Egne in 1189 by Bishop Konrad of Trient , who granted the market settlement based on the example of Bolzano with Trento housing rights, duty and tax exemption ( "sicut Tridentini et Bauzanenses concives et negociatores" ). Due to its central location in the lowlands on the trade routes between north and south and in particular due to the Adige shipping, the village gained high economic and cultural importance in the Middle Ages. The "Ballhaus", where the goods were stored, testifies to this. In the 13th century, the original location was destroyed by floods and rebuilt as the "New Market". In 1309, Duke Otto von Kärnten-Tirol granted the place privileges that stipulated that all goods that came to Neumarkt on wagons or ships had to be deposited here and transported by the residents of Neumarkt in a fixed order.

Kaldiff Castle (Caldiff) was built above the town center in the 12th century. This still exists today as a relatively well-preserved ruin.

In 1340 parts of the place were destroyed by fire; With a 10-year tax rebate from the sovereign, the place could be rebuilt. The Griesfeld residence , also known as the “Spital”, dates from the 17th century.

Until the end of the First World War Neumarkt belonged to the county of Tyrol and thus to Austria-Hungary . Within Tyrol, Neumarkt was the capital of the Neumarkt judicial district , which in turn was part of the Bozen district . With the Treaty of Saint-Germain , Neumarkt came to Italy in 1920 along with most of Tyrol south of the main Alpine ridge . When the two provinces of Bolzano and Trento emerged in these formerly Austrian areas in 1927, Neumarkt, like some other surrounding communities, was added to the predominantly Italian-speaking province of Trento. It was not until 1948 that Neumarkt was incorporated into the province of Bozen or South Tyrol. 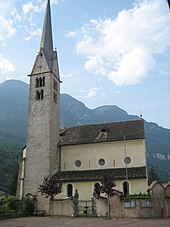 Other buildings in and around Neumarkt

On June 26, 1968, Luis Walter (chairman 1968–1984) founded the South Tyrolean Unterland Open Air Theater (FSU). With productions by the classic authors of the Tyrolean folk drama, the stage soon found recognition at home and abroad and established itself as a significant part of the South Tyrolean theater scene.

In 1978 the Theater an der Etsch (TaE) was launched as a platform for theater and cultural work outside the open-air season.

When Zeno Bampi took over the management of the association (1985), the association, now: Freilichtspiele Südtiroler Unterland - Theater an der Etsch (FSU-TaE), transformed into a professional cultural enterprise. Under the artistic direction of the actor and director Roland Selva, the FSU-TaE endeavored to develop an independent South Tyrolean theater style.

The Neumarktner Laubenfest takes place once a year . The three-day festival extends from the main square to the lower part of the village, with the various associations in the village supplying visitors with food and drinks at stands.

For motor traffic , Neumarkt is primarily opened up by the SS 12 , which passes close to the center of the main town. On the orographic right-hand side of the Etsch, the A22 runs parallel to the river , the entrance and exit of which Neumarkt-Auer-Tramin is already in the municipality of Tramin despite being closer to the center of Neumarkt.

Also on the other side of the Adige, the Brennerbahn also crosses the valley floor. The Neumarkt-Tramin train station and the Margreid-Kurtatsch train station are both just outside the municipal boundaries, but they are quick access points for the main town of Neumarkt and the Laag fraction .

Neumarkt is on the long-distance cycle path , which runs as the Via Claudia Augusta along an ancient Roman road of the same name .

The coat of arms of the municipality of Neumarkt, divided lengthways in red and silver, bears a silver crescent moon in one half and a red cross in the other. A seal awarded to the citizens of Neumarkt in the late Middle Ages serves as a model.

In 1968 Neumarkt signed a city ​​partnership with the German city ​​of Rheinfelden (Baden) in Baden-Württemberg .

In the municipality of Neumarkt there are two German-speaking primary schools in the main town and in Laag, which are administered together with three other primary schools in the neighboring communities of Kurtinig, Margreid and Salurn as a joint school district from Neumarkt. There is also a middle school in Neumarkt, which, together with the Salurn middle school , forms a district that is also located in Neumarkt. The only secondary school offer is the “Griesfeld” school for home economics.

There are two Italian-speaking primary schools in the main town of Neumarkt and Laag. Neumarkt is also the seat of a middle school. All three schools are jointly administered in the Unterland school district.

Neumarkt is a member of the I borghi più belli d'Italia association (“The most beautiful places in Italy”).

People with connections to Neumarkt

Municipalities of the district community Überetsch-Unterland