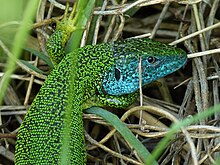 The western green lizard ( Lacerta bilineata ) is a large European lizard species with a green basic color. Only with evidence of insufficient cross-ability and after further comparative genetic studies has it been recognized since around 1991 that it is a separate species besides the Eastern Green Lizard ( Lacerta viridis ). Previously, these species had not been differentiated, although there had been hints and efforts to do so earlier.

It is a large, but quite slender-looking lizard with a pointed head and a tail that is quite long, especially in the case of the males. Its dimensions can be 1.6 to 2.3 times the length of the head and torso, which is up to 13 centimeters. The maximum total length is often difficult to quantify, however, as many older animals no longer have an intact tail, but have lost it and (incompletely) regenerated it in the meantime in contact with predators or in mating fights. However, a total length of about 40 centimeters is achieved. The extremities are relatively long in relation to the trunk; Specimens from Germany are said to stand out due to their particularly long rear legs.

The back and large parts of the body are light to dark green in both sexes. The green color arises only gradually in the course of the first years of life; the young appear in shades of brown. While the somewhat more robust-looking, larger-headed males usually have small black, sometimes ornament-like speckles on the green base color, the females often have a drawing pattern with rows of dark markings and whitish-yellow lines that can merge into longitudinal bands. However, depending on the region and season, the sexes cannot always be differentiated by means of drawing features. The abdomen and throat are spotlessly white, greenish or yellow in color. With the first moult after hibernation, the chin, throat and throat regions turn green-blue to "cornflower blue" in both males and partially in females. This “mating dress” appears richer in contrast and color in the male.

The above description also fits the sister species, the Eastern Green Lizard . Morphologically, there are only minor differences in the scaling and body proportions. Apart from genetic characteristics, these two species can mainly be distinguished by their distribution. Occasionally, an emerald lizard can also be confused with a male sand lizard ( Lacerta agilis ).

Green lizards prefer sun-warmed, south / south-west / south-east exposed slopes with a sufficient degree of moisture and a mixture of open structures and mosaic-like vegetation as habitat . Particularly suitable examples are drier forest margins, grassy vineyards , semi-dry grasslands (but not loose bushes dry grass !), Gorse heaths , blackberry thickets, train and Wegdämme , meadows with Schlehengebüschen and sparse orchards . In green lizard habitats, there are often collections of stones with an accessible system of gaps (e.g. piles of stone piles and dry stone walls ). In the south of the distribution area, on the other hand, the occurrences are often limited to humid locations or to mountainous regions. The diurnal animals take extensive sunbaths in the morning and in the evening; otherwise they climb around in the vegetation looking for food. In case of danger, they scurry very quickly into protective vegetation as well as crevices and hollows.

Specimen with a regrown tail (beach dunes near Cavallino, Italy)

After about six months of wintering in frost-proof burrows in the ground, the males appear first in March or April, then the females and finally in May the young animals appear on the surface. First of all, warming up in sunlight is in the foreground for cold-blooded animals . After molting, mating activities begin in May. The individuals claim territories , which the males defend with one another in fierce battles with imposing behavior , biting and chases. They show typical courtship behavior with certain movement patterns towards females . When mating, the male first bites the tail of the female running in front of him; both continue in the so-called mating march. It then bites its flanks, bends its lower body under the female, and inserts its hemipenis into the female's cloaca . The copulation takes several minutes. A female mates with several males and vice versa on occasion.

After about three to six weeks, the females lay 6 to 23 eggs, initially about one centimeter wide. The eggs are laid at night in probably self-dug burrows that are about 30 centimeters long and about ten centimeters below the surface. After that, the females often guard and defend the clutch for a few days - also against other females.

The development of the eggs (egg fermentation) takes about 70 to 100 days depending on the ambient temperature. Their initial volume increases by about a third when they absorb water. The hatchlings are already eight to ten centimeters long. Sexual maturity occurs at just under two years of age , and the lizards, which until then have grown rapidly, slow down their further growth. A life expectancy of ten to twelve years is assumed.

Green lizards eat larger insects , spiders , woodlice , snails and small vertebrates (e.g. young mice), but also reptile eggs and young animals as well as berries. They actively hunt prey with the help of their visual and olfactory senses, grab their prey with their toothed mouth and swallow them directly or after chewing them several times. Bulky parts such as the hard wing covers of insects are removed beforehand by shaking.

They themselves are part of the prey spectrum of snakes (for example, often syntopically occurring smooth snake ), birds of prey and nine killers . Chickens mainly eat the young. The mammals include house cats , shrews , hedgehogs , foxes and species of martens .

Distribution of the Lacerta viridis group in Europe and Asia Minor

The western green lizard occurs on the northern edge of the Iberian Peninsula in Spain , in large parts of France , on the English Channel Islands , in southwest Germany , in southern Switzerland , in Italy including Sicily and on the Croatian island of Cres . In Kansas / USA the species was introduced by humans.

In Germany there are currently only a few island-like populations in Rhineland-Palatinate , where the middle Rhine Valley and the slopes of the lower Moselle and Nahe are settled. In 2003, after 150 years, green lizards were found again in Hessen in the central Lahn valley . According to the first molecular biological investigations, it is assumed that it could be a previously overlooked Lacerta bilineata population. However, the question of autochthonism cannot be finally clarified. According to an expert opinion, a detailed landscape analysis (former wine-growing area , tangential railway embankment, heat-tinted biotopes) gives at least indications that speak for a natural occurrence. Evidence of spatially mediating populations from the Lahn valley between Weilburg and Lahnstein could provide real evidence of autochthonism .

In earlier decades and centuries, the spread in Central Europe was probably more continuous. The sister species Eastern Green Lizard ( Lacerta viridis ) is found in Brandenburg, Bavaria (Passau area), Austria and all of Southeast Europe . According to new DNA studies, the green lizard populations at the Kaiserstuhl are also (again) counted as Lacerta viridis by some authors and considered naturalized after they had been assigned to Lacerta bilineata in the meantime. However, in the Herpetofauna of Baden-Württemberg, which appeared a little later (2007), it is assumed that the southern Baden green lizards on the Kaiserstuhl and on the Tuniberg belong to the species Lacerta bilineata .

Germany, Italy and Croatia are the only countries in which the two green lizard species Lacerta viridis and Lacerta bilineata occur. In the north-eastern Italian region of Friuli- Venezia Giulia , a hybridization zone of both species seems to exist; otherwise their distribution areas are largely allopatric . On the Croatian island of Cres, however, a bilineata population was able to survive, while this species was probably displaced in the rest of the Istria region by the eastern green lizard, which was spreading to the west.

Lineage of the green lizards ( Lacerta viridis , Lacerta bilineata ). In addition to the eastern and western green lizard, there are two other basic lineages. The Adriatic Line and the Asia Minor. The eastern green lizard can in turn be divided into three separate taxa.

The subspecies bilineata , chloronota and fejervaryi were originally described as such by Lacerta viridis . The validity of the subspecies status of Lacerta bilineata chlorosecunda and L. b. fejervaryi is questioned by some authors.

The formation of two biological species of green lizards was initiated by biogeographical factors. The entire area has a relatively narrow " bottleneck " south of the Alps , which restricts the exact exchange . No contiguous distribution area could develop and maintain north of the Alps after the Ice Age . Favored by this extensive spatial separation, selective evolutionary processes took place, which gradually led to genetic differentiation in the populations. This was methodically verified by comparing genetic distances of allozyme profiles and mitochondrial DNA sequences (cytochrome b). Today the development has advanced so far that crosses between individuals of Lacerta bilineata and Lacerta viridis result in very limited fertile offspring. It is assumed that speciation is currently at a "point of no return".

Unfavorable climatic conditions and changes can lead to population losses, especially on the northern edge of the distribution area, especially in Germany. This affects more territorially isolated populations that are already weakened by other factors and poor in individuals. However, certain anthropogenic measures have a decisive effect in the habitats, which can generally be characterized as extensive cultural landscapes . The intensification of management (e.g. implementation of land consolidation measures), the expansion of traffic routes or the encroachment or afforestation of semi-open habitats are among the things to be mentioned. It is possible that it is captured by “lovers”, although the species is protected under the Bern Convention, among other things .