Jenesien ([ jeˈnesɪən ]; Italian San Genesio Atesino ) is an Italian municipality near Bolzano in South Tyrol with 3074 inhabitants (as of December 31, 2019). 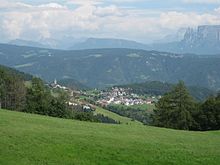 The main town of Jenesien from the west

The municipality of Jenesien extends over the southern part of the Tschögglberg , a ridge of the Sarntal Alps that rises between the Etschtal and the Sarntal . It includes two villages, several hamlets and numerous farmsteads, which are spread over the middle mountainous area , which is characterized by forests and meadows. In contrast to the other Tschögglberg municipalities, the municipality of Jenesien also reaches valley areas: In the east the Talfer in the Sarner Gorge forms the municipality boundary for several kilometers, in the southwest a narrow strip of area near the church of St. Cosmas and Damian briefly touches the bottom of the Adige Valley.

The main town of Jenesien is located at an altitude of 1100  m in the south of the municipality high above the Bozen valley basin. The second village settlement, Afing , is located 870  m above sea level in the east above the Sarner Gorge. The farms of the hamlet of Glaning (divided into Oberglaning and Unterglaning) are scattered at altitudes between 700 and 1200  m on the slopes above the Adige Valley. In the northeast of the municipality is the Salten , which is characterized by the alternation of pastures, mountain meadows and scattered larches . In the area of ​​this cultural landscape lie the scattered settlement of Nobls and, a little further north at an altitude of 1350  m , the small village of Flaas .

The name Jenesiens comes from the soldier saint Genesius of Rome , the patron saint of the parish church of the place, and is first documented in 1186 as "Mons sancti Genesii" (Jenesienberg). The settlement is in total Tyrolean Urbar Count Meinhard II. Of 1288 as "sand Gene Sien" named because of the sovereign possessed here on taxable property. The parish of Jenesien has been incorporated into the Augustinian Canons' Monastery of Au - the later Muri-Gries Abbey - since 1328 . In the 12th century, the Bolzano Counts von Morit-Greifenstein set up the “court uf sand Genesienperch” based at Greifenstein Castle .

The economic ties with the central town of Bolzano also seem to have been very intense since the High Middle Ages. In research it is assumed that the Genesius market attested since 1208 in Bozen, one of the dates of the annual masses there , goes back to the old church market in Jenesien as a direct precursor.

During the Tyrolean battles in the anti-Napoleonic revolts of 1797 and 1809, there were armed forces around the Jenesiener height position.

The predominant character of a mountain village until the new road was built in the 1980s was lost over time; In the last few decades the place has grown strongly due to the influx from Bolzano .

View of the village center 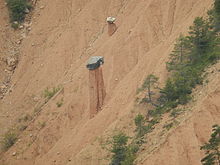 Earth pyramids exist about 3 km northwest of the main town (near Nobls, Lage ) . Compared to those on the Ritten , however, there are fewer, and they also have a squat shape. Other sights are the Jenesiener church tower and the adjacent village square. 46.5476 11.2914

The economy of Jenesien is closely tied to the nearby city of Bolzano. Jenesien has been promoting tourists together with Bozen for years. There are some hotels, inns, guest houses and, more recently, farms that accommodate guests. In addition, Jenesien has lively day tourism due to its proximity to Bolzano and its easy accessibility.

Many farms deliver the milk they produce to Bozen, the largest South Tyrolean milk producer, Mila . Fruit, wine and vegetables are also grown. The Raiffeisenkasse Bozen operates a branch in Jenesien.

From Bolzano there is a well-developed road to Jenesien. At the beginning of the 1980s, this road replaced the old road that could not be used by heavy vehicles. Many Jenesier commute to work in Bolzano every day; Many craftsmen are also given jobs in Bolzano and the surrounding area.

The Jenesien cable car has been connecting the main town with Bozen since 1937 . For many years the cable car was the only means of public transport. The 156 bus also provides a connection to Bolzano.

Communities of the Salten-Schlern district community