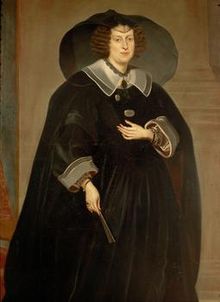 Claudia de 'Medici was born in Florence as the last daughter of the Grand Duke of Tuscany Ferdinand I and Christine of Lorraine in the influential Medici family. In 1621 she married the future Duke of Urbino , Federico Ubaldo della Rovere , to whom she was promised at the age of four. According to his doctors, he died of an epileptic fit as early as 1623. The 19-year-old widow first returned to Florence, where she was housed in a convent.

In 1626 she married Archduke Leopold V , the brother of Emperor Ferdinand II. With the wedding she became Princess of Tyrol. The lavish court life and patronage resulted in a high level of debt. Claudia gave birth to five children in this marriage. After just six years of marriage, Leopold died and thus widowed Claudia for the second time. From 1632 to 1646 she therefore took over government affairs in place of her underage son Ferdinand Karl (born 1628) together with a five-member council (including Wilhelm Biener ). However, the administration suffered from fierce competition from the two leading politicians Wilhelm Biener and Isaak Volmar .

Archduchess Claudia was first next to Emperor Ferdinand II and after his death in 1637 next to Emperor Ferdinand III. Co-regent of Tyrol and Upper Austria . She played an important role in the Thirty Years War, as she vigorously defended her political interests. The commander of the fortress Hohentwiel , Konrad Widerholt , disrupted the connections between the ancestral Tyrol and the western Austrian possessions in southwest Germany and Alsace. The Archduchess therefore vehemently advocated a blockade and siege of the fortress. However, five attempts by the imperial party to conquer the fortress failed.

When the imperial party dominated militarily, the Archduchess took advantage of this favorable situation and pursued an expansive foreign policy. So she endeavored to expand the front Austrian possessions by demanding territories conquered in the Duchy of Württemberg on behalf of her underage children. She claimed the Achalm pledge and the offices of Göppingen (Hohenstaufen pledge) and Blaubeuren . After 1636 she was able to take possession of these lords and receive homage. In the spirit of the Counter Reformation, she tried to reintroduce the Catholic denomination. In the Peace of Westphalia , the lords were again the Duke Eberhard III. awarded by Württemberg. Until the end of her reign, the Archduchess had resisted a return. Had it prevailed, the dukes of Württemberg would have lost land from important offices. Front Austria would have advanced territorially far to Württemberg and would also have acquired a land bridge between the Hohenberg rule in the west and the Günzburg district in the east.

In Upper Swabia, Archduchess Claudia laid claim to the Landgraviate of Stühlingen and the County of Lupfen during the Thirty Years War in 1643 , but was unable to assert herself in the long term. In addition, the Archduchess wanted to secure the Habsburg possessions in Alsace . She also acquired territories in the area of Bolzano and in the area around Trento . She was constantly in conflict with the bishops of the two principal bishoprics because they refused to pay taxes and duties to Innsbruck.

Archduchess Claudia died in December 1648, according to records of water accumulation, a typical ailment of this time.

The mercantile building in Bolzano

During the Thirty Years' War, Claudia had the fortresses Ehrenberg ( Fort Claudia as part of the Ehrenberg Castle ensemble), Kufstein and Scharnitz ( Porta Claudia at the Scharnitzer Klause , named after her) built and ensured an improvement in the military defense of Tyrol, which was due to the permanent Threat from the expansion of the war south was necessary.

In addition, it promoted art with the introduction of the baroque theater, the trade with a new constitution for the Bolzano Fair 1633/35 and the expansion of the craft in Tyrol. In 1635 she founded the mercantile magistrate in Bozen, a bilateral German-Italian special court in commercial matters, which was later housed in the mercantile building.

from the first marriage to Federico Ubaldo della Rovere

Claudia's name to the Porta Claudia in Scharnitz, the Fort Claudia in Reutte, the Claudia de 'Medici Street and the country's College of Health Professions "Claudiana" in Bolzano, and the Claudiastraße, the Claudia place and also Claudiana called old government building in Innsbruck .

The German-Austrian writer Hermann von Schmid created a literary monument in memory of Claudia von Medici in his three-volume historical novel The Chancellor of Tyrol , published in 1863 .